The Sheep in Leopard’s Clothing

Leopard Wrasses of the Genus Macropharyngodon 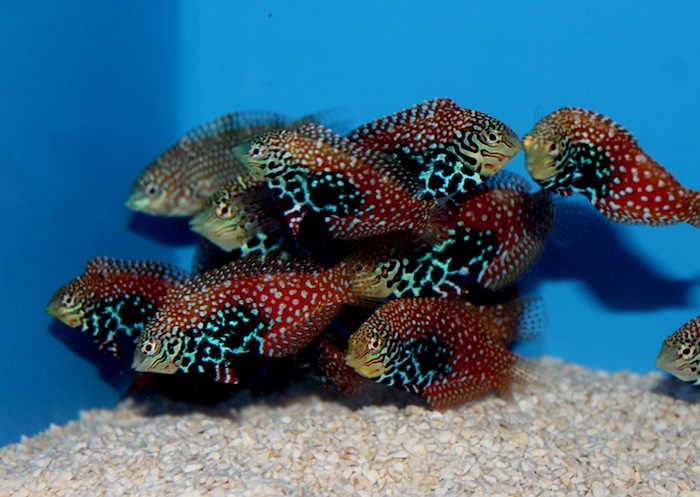 M. bipartitus females in a dealer’s tank in Europe.

The genus Macropharyngodon are familiar to many marine aquarists under the common name ‘Leopard’ ‘Peacock’ or ‘sand’ wrasses, three names which relate to the fact that nearly all species within this genus display a gaudy livery of bold spots commonly mixed with facial stripes, and all have a trait of burying themselves in the substrate when either startled or resting. However, the scientific name ‘Macropharyngodon’ refers to their unique upper jaw dentition which in addition to the normal array of teeth, also consists of two enlarged ‘forward pointing’ canine teeth that are located just forward of where the lower and upper jaw meet. This applies to all species within this genus except M. kuiteri. Typically non-aggressive to other species except those similarly marked, this family may seem one of the ideal wrasse families alongside similar sized members from the Anampses genera. 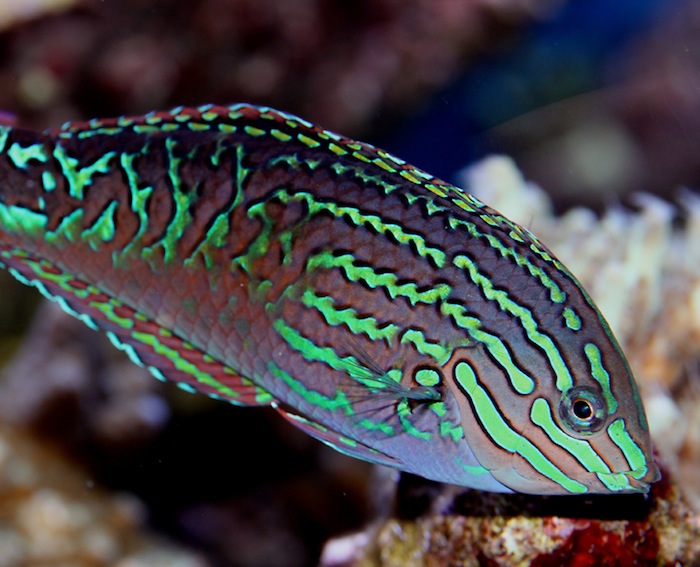 As with nearly all wrasses, members of this family are protogynous hermaphrodites which means they are basically all female when juvenile with a dominant female changing to male should factors dictate the need. On top of this, we also have differing degrees of male’ness’ for want of a better description, with primary (or super males) ruling over a harem of several females. Should he fall foul of a predator, then the first dominant female will change quickly to a functional male to fill the void. This ‘secondary’ male is usually slightly smaller and less boldly marked than his predecessor. The rate of sex change can be startling in that it can take, on occasion, less than 24 hours. This is a useful trait for the hobbyist in that similar to Anthia Sp, you can take several smaller females (usually 3 or 4 in the case ofMacropharyngodon compared to 6 or 7 in the case of Anthia Sp), add them to an aquarium, and if all goes well, the most dominant female will quickly turn into a functional male within just a few days to weeks.

However don’t be fooled–this is not an easy family of fish to keep for several reasons. The first of which is shipping stress and disruption to the circadian rhythm or body clock. Shipping these fish to different time zones commonly sees them severely stressed out for several days afterwards with the fish seemingly incapable of adjusting itself to the new light and dark phases. Consequently, a quarantine system is advisable in such cases so that they can be gently adjusted over to local day/night cycles over a few days to a week. Secondly, they can be extremely nervous fish with a very high metabolism meaning that unless they are given calm surroundings with plenty of food from the start, they will often simply waste away in the presence of more dominant species. 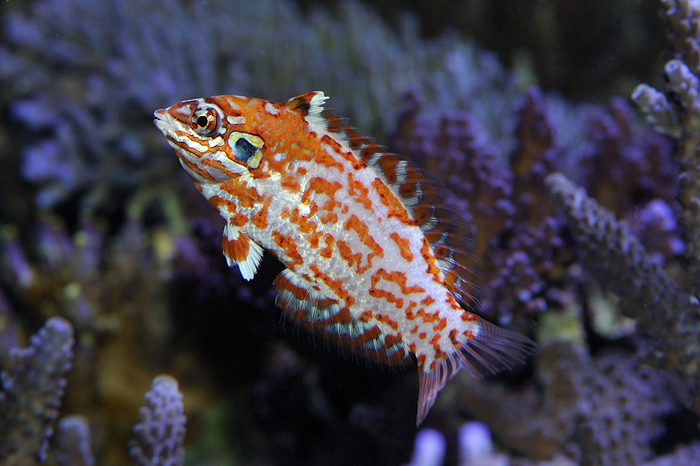 Diet typically consists of small worms and crustaceans such as copepods and other small rock dwelling fauna, although they generally won’t bother sessile inverts like corals and clams etc. They are often mis-quoted as being good flatworm cures, however this is usually only a temporary trait, whereby the new fish in its ignorance of the more favorable prepared foods being offered reverts to scavenging in desperation, trying anything it can find with flatworms being an easy, if not very savory snack. Over a short period of time the fish will nearly always revert over to prepared foods as a preference leaving the original ‘problem’ unresolved. They do, however, have a penchant for baby dove snails that they take great pleasure in hunting down and crunching on with an audible crack as they bite through the softer juvenile snail shells. If you plan on introducing any members of this family, then an infusion of dove snails, which will multiply without much effort in most systems, may be a worthwhile consideration a few months beforehand so the population can establish itself as an initial food source for the fish. Eventually, they will become accustomed to small prepared foods such as mysis, small krill, brine, chopped mussel and other small meaty fare. High quality flake is also an option with some examples, but it can be a slow process converting these beautiful but jittery fellows over. One pest that they can definitely help with though, which is indeed part of their natural diet, is the Pyramidellid parasitic snails commonly found on clams and other mollusks. 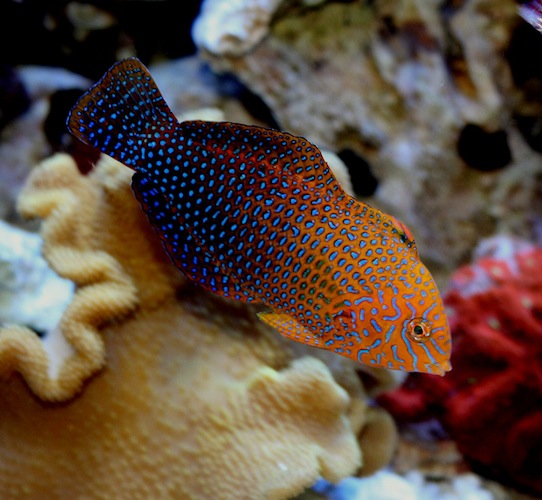 The stunning but rare and delicate M.geoffroyi.

In all cases though it should be remembered that members of this family are predominantly found in areas of high flow with extensive rockwork, and lots of cover in the form of bolt -holes, tunnels and crevices, plus a good growth of micro fauna. Efforts should be made to carry these features over into the aquarium if the fish is to be able to scavenge enough between feedings to meet its high metabolism, and feel secure enough in its surroundings. Adding these fish before larger more aggressive tank mates is usually advisable, but only after the system and rockwork has stabilized and gone through its first few months settling, so that critter populations have recovered somewhat and had a chance to establish. It should come as no surprise then that much like mandarin fish of the genus Synchiropus, these are not really fish for the nano system.

The name ‘sand wrasse’ has been given for good reason because all members of this family will typically dart into the substrate as soon as the main lights go out or when chased or startled, so a substrate is essential in all cases. Softer, finer substrates are preferred of at least 1” depth to prevent the fish crashing into the base pane of the aquarium as it tries to bury itself. Once buried for the night, the fish will typically secrete a mucus cocoon around itself that is believed to mask the fish’s chemical scent from would be predators.

In quarantine systems or shop tanks, a simple bowl filled with sand is an ideal and essential alternate resting place. There has been many occasions I’ve visited stores and had the owner complain that these fish have a very poor track record in their care, only for me to explain the fact that because the fish has nowhere to sleep, they are basically burning themselves out. Do not be surprised however if when first introduced, members of this family disappear off into the sand for a few days before resurfacing. Avoid if at all possible disturbing the fish during this period by raking the sand, as it may shock the fish into a flight scenario with the fish exiting the top of the tank at warp speed like a trident missile emerging from a nuclear submarine. In most cases, simply ignoring the fish and carrying on as usual will see the new fellow suddenly emerge after a few days as though nothing had happened. 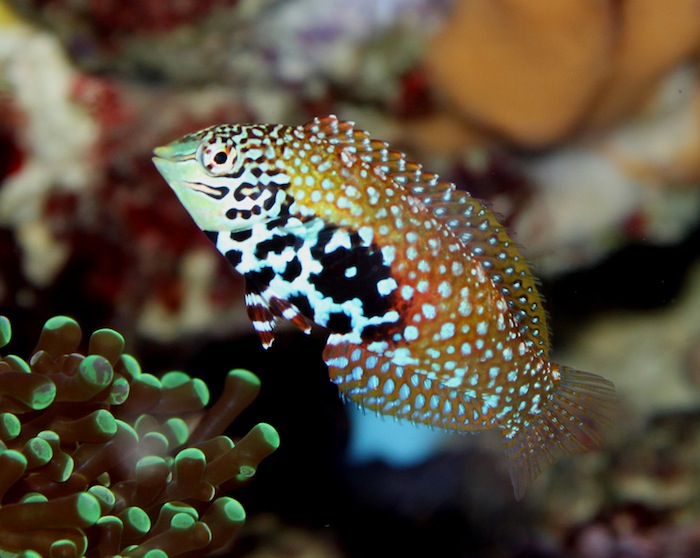 M. bipartitus showing color variation that is common in this family.

When looking at degrees of suitability we would commonly group the various species into the following two categories.

Typically as with many other families, the most beautiful members are, as usual, the rarest and most difficult with M. geoffroyi, M. negrosensis, and M. cyanoguttatus a case in point. If you do have the time, suitable system size, facilities to acclimatise and initially pamper one of these species through its early days to ensure long term success, the rewards gained in viewing pleasure and character are certainly worth it.