Thraustochytrids: The Most Important Coral Symbiont No One Knows About

There has been an overlooked yet vitally important organism living in our reef aquariums. I’d like to introduce to the hobby a group of very important critters that have been unknowingly growing for years.

This article will address what is perhaps the least known, yet vitally important coral symbiont. Zooxanthellae have long been the first organism that comes to mind when one references coral symbionts. While these are indeed very critical for the survival of photosynthetic coral, there are other organisms that are in some cases just as critical for coral survival.

We all know that coral have symbiotic organisms that live inside them. The collection of organisms including the coral is known as the holobiont, a dynamic community of bacteria, algae, fungi, and other microorganisms. We are very familiar with zooxanthellae, the dinoflagellate algae, which help provide much of the coral’s nutrients in the case of photosynthetic coral. However, we have been neglecting another important symbiont–the fungus like group of protists called Thraustochytrids from the family Thraustochytriidae. There are symbiotic, commensal, and parasitic species, but for the purposes of this article I will be talking about commensal and symbiotic species only. 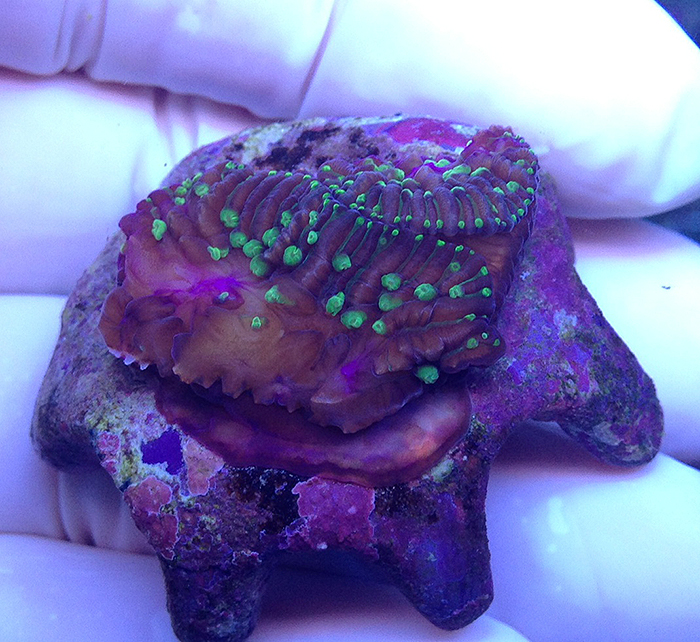 Example of a Project X Fungia. Fungia are associated with large populations of Thraustochytrids. I utilize this partnership to create unique varieties of growth.

Thraustochytrids are found in many environments worldwide, including oceans and estuaries. They perform vital nutrient cycling functions in sediments, as well as in, on, and around organisms such as coral. It was long thought these protists were some type of fungi, however more recent studies have shown they are genetically distinct from fungi, and are now grouped in with chromists, which include kelp, mildew, and diatoms. Thraustochytrids tend to like a more nutrient poor environment in culture as compared to some other microorganisms, which may indicate their needs in the natural environments, and our home aquariums. This could be one of the reasons that most coral fair poorly in high nutrient aquariums, and why some coral lose their vivid fluorescence (more on that below.) In higher nutrient aquariums these beneficial Thraustochytrids may be outcompeted in the coral mucous by other, less helpful species of bacteria and protists.

Thraustochytrids have been found to be early settling organisms (within days). Studies have also shown that surfaces which had Thraustos present were more readily colonized by barnacles. Could this indicate that along with certain bacterial biofilms and coralline algae, coral larvae may settle more readily on surfaces where certain species of Thraustos are present? If so, this could have potential applications for reef restoration efforts.

It is known that Thraustos are also more abundant on coral in cooler temperatures, as well as more abundant on massive and encrusting coral, as compared to branching species. Given the importance of Thraustochytrids in providing nutrients to coral, perhaps the overall lower average number of Thraustos and the severe lack of them at higher temperatures, helps lead to bleaching. This could, in part, explain the higher rate of bleaching seen in branching coral. 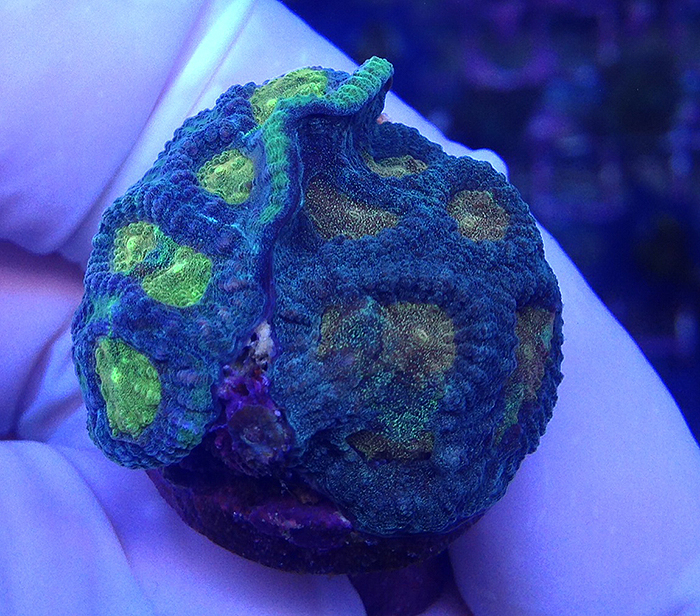 In this picture you can see two varieties of Favia that after grafting, have influenced each other’s color. Favia have been found with large amounts of symbiotic Thraustochytrids.

Thraustochytrids are very interesting organisms to science and industry. Thraustos produce a large amount of fatty acids including HUFA, PUFA, MUFA, and DHA. They are being explored commercially for food additives and jet fuel among other products. So in a sense, corals are growing jet fuel in their mucous!

Not surprisingly, with all the essential nutrients they make, these organism are also very, very important for the health, survival and value of the coral we keep. Several studies have found greater than 90% of the organisms living in the mucous of the coral sampled are from Thraustochytrids. That is a very significant number, and underlines the importance of the mucous coat and its micro-organism balance in regards to the health of the coral. Coral produce mucous which has some sugars that feed the Thraustos, which then produce copious fatty acids that the coral then eat. Also the mucous layer is often the coral’s first line of defense, especially from bacterial infection, or brown jelly.

Thraustos can be found either within the corals cells, with fungus like protrusions emanating from the coral like miniature porcupines, or living amongst the mucous coating of the coral. In the mucous the Thraustos provide nutrients for the coral and protection from against harmful bacteria and microorganisms. The intracellular Thraustos produce extensions, from specialized organelles called bothrosomes, which reach out from the coral cells, much like mycorrhiza fungus in plant roots. In plants, mycorrhiza live within the plants roots, and absorb nutrients from the surrounding soil, especially those that the plant cannot take up by itself. It is believed that Thraustos serve the same function in this instance, providing more surface area for nutrient uptake, and absorbing nutrients that the coral cells themselves are not able to absorb directly.

One element that Thraustos are known to utilize in some quantity is sulfur. Sulfur, along with nitrogen, phosphorous, and potassium, is one of the most important elements to life. Sulfur is present in the make up of all proteins and plants and animals cannot grow without sulfur.

In our aquariums, sulfur is provided by water changes, feeding, and some additives, however there are examples of deliberate sulfur dosing leading to better outcomes for coral health.

In the 50s and 60s suppliers would ship Manicina rose coral from the Caribbean along with Butterfly fish they sold, in order to keep the fish fed. The key to keeping the rose coral alive was to put rock sulfur in the aquarium or marine system. This is consistent with the findings of several papers, that corals associated closely with the ocean floor in sand or rubble, often had high percentages of Thraustochytrids.

Rose coral are often found growing in the sand associated with seagrass. As those with deep sand beds know, if you disturb the sand in the deeper layers you may catch a whiff of the rotten egg smelling sulfur dioxide. Sulfur is in every protein, and proteins make the stuff of life. The live sand bed is full of life, therefore full of sulfur, among other elements. With the coral’s close association with the nutrient rich substrate, the Thraustochytrids have a perfect place to set up shop. The coral provides the main limiting nutrient, carbon, in the form of glucose and other sugars (originally produced by the corals other symbiont, zooxanthellae), to the Thraustochytrids, who then utilize sulfur and other elements from their surroundings to grow and produce fatty acids and vitamins, which the coral then consume continually throughout the day.

Perhaps in the future we will have a ready supply of commercial products designed to deliver sulfur and other critical nutrients to the Thraustochytrids, and perhaps rewarding us with greater success with more species of coral. 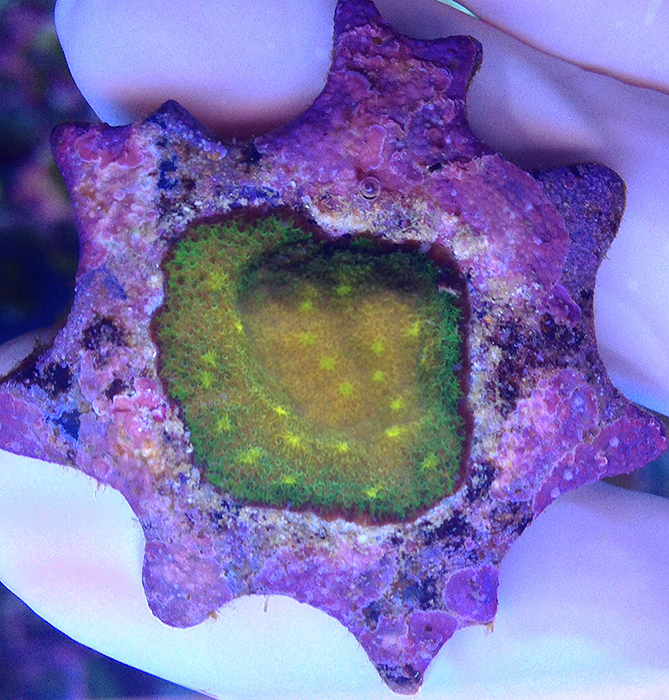 Example of a Psammacora with a green “rainbow” ring. Some of the “Sunset” or “Rainbow” varieties of coral exhibit transitional color along the edge of the colony. These colors being predominantly green, which may be higher populations of Thrasuatochytrids growing closer to the substrate.

One of the most exciting potentialities with Thraustochytrids is their influence on coral color. Color is the single most important factor regarding the value of coral in the market place. Brown coral are not highly sought after, add some color to the mix, and the coral is more desirable, and particular colors in certain coral can increase the value as much as ten fold.

We know in the hobby various factors that can influence coral color. Proper light intensity of the correct spectrum is required, as well as low nitrates and phosphates, and high enough levels of other elements such as calcium, potassium, iron, and proper alkalinity. We all know that zooxanthellae influence color, they are pigmented brown and their absence leads to coral bleaching. Coral themselves also produce fluorescence proteins that add to the brown color pallet provided by the zooxanthellae. These proteins provide much of the rainbow of hues we are familiar with in coral.

There has been some current work on Thraustochytrids, in as of yet unpublished experiments where natural fluorescence has been found in some Thraustochytrids associated with coral. They have found green and sliver proteins in Thraustos, and it’s possible in the future researchers will discover Thraustos are producing other colors. I strongly suspect that there is an orange fluorescent protein producing strain as well.

If it is indeed the case that Thraustos produce their own fluorescent proteins, then this could be a significant factor in the development of color in aquarium coral. Many reef aquarists have witnessed “jumping colors” in our reef aquariums. Zooxanthellae swapping is known to happen in nature, and in aquariums. However all zooxanthellae is brown, so the clade or strain of zooxanthellae alone should not change color, unless there is feedback between the coral and zooxanthellae regarding what fluorescent proteins the coral makes. This is indeed a possibility and should not be discounted. Thraustochytrids producing their own fluorescence and colonizing nearby coral in our aquariums is also a highly plausible, and simpler explanation for this color change. 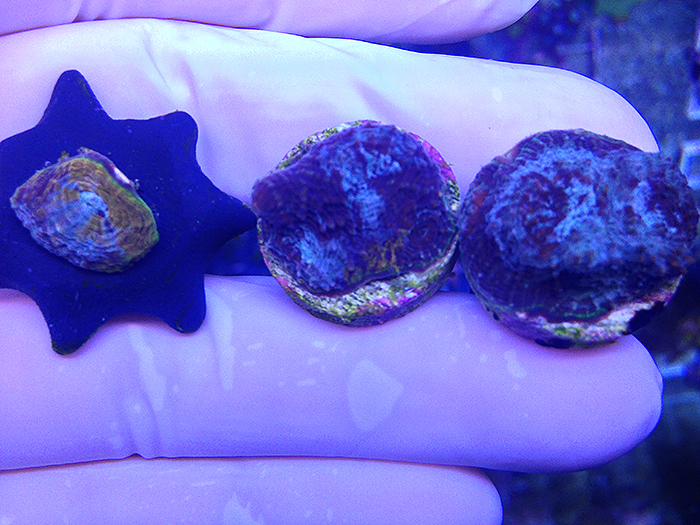 These three frags are from the same colony. Some areas of the colony had higher percentages of orange and bright green. While frags devoid of bright colors were able to pick them up from other frag kept close by. Acanasthrea have been show to have large Thraustochytrid populations. It is possible that the bright green and orange fluorescent proteins are produced by symbiotic Thraustochytrids, thus explaining the transmissible nature of the color.

In our aquaculture systems at ReefGen, I have been cultivating several varieties of coral with this potential in mind and have been seeing very interesting results. I have noticed several shades of green and orange cultivate among and between individual Acanthastrea echinata, and not surprisingly this was especially common on the edge of the colony exposed to less light and in close contact to surrounding substrate. I have been able to cultivate larger percentages of desirable color in these coral, and I will keep using my knowledge of Thraustochytrids to further my success.

I plan to keep researching further these fascinating protists, and I hope in the future that everyone in the hobby who can say Zooxanthellae, can also pronounce Thraustochytrid.