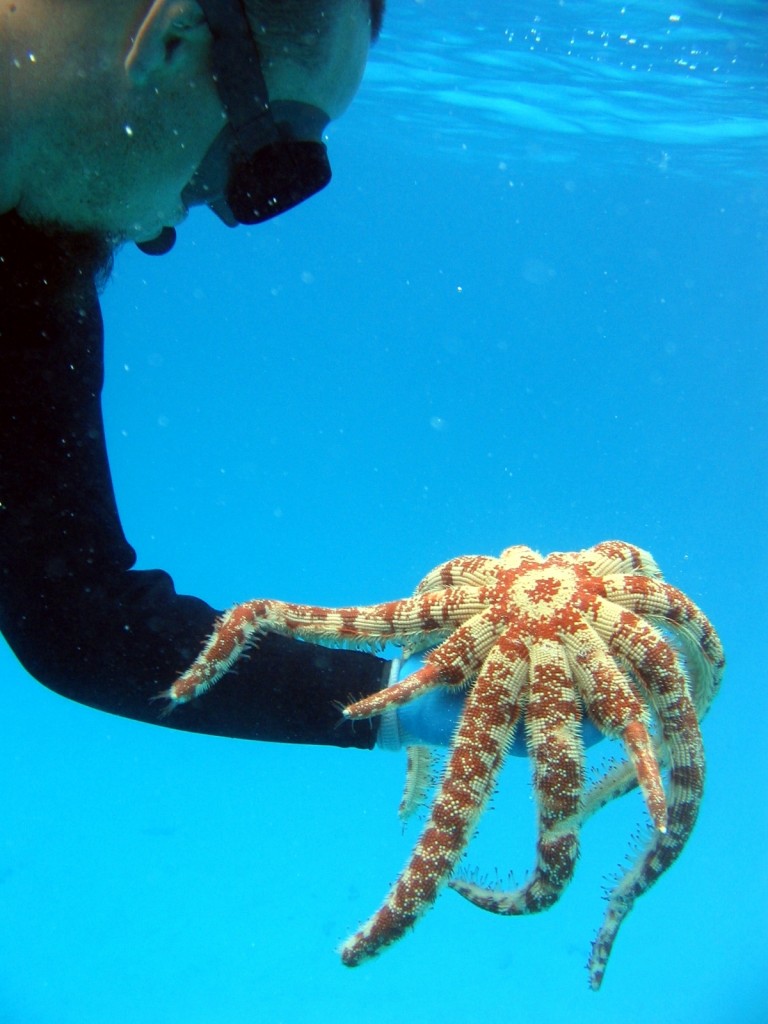 There are dozens of genera of sea star found around coral reef habitats, yet little of this biodiversity makes its way into the aquarium hobby. But, while only a handful of species find themselves regularly exported, every now and then something a bit out of the ordinary does show up, as seen in the recent collection of a truly rare and spectacular species from the Philippines—the Magnificent Star Luidia magnifica. 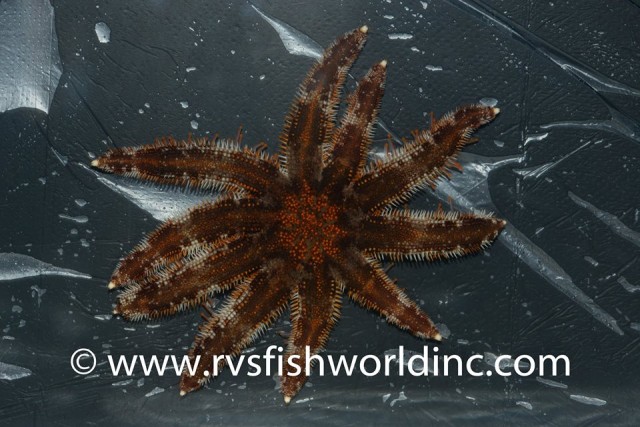 Luidia sea stars are seldom encountered in aquarium exports, though they are often quite abundant in the wild. The genus bears a confusing similarity to Archaster typicus, a small species commonly sold as the “sand-sifting sea star” (and often misidentified as Astropecten polyacanthus). Both show similar morphological adaptations for a life lived in shallow sandy habitats—a flattened body and cryptic coloration—but the two are actually quite distantly related.

Luidia belongs to the Order Paxillosida, distinctive for the spiny structures (termed paxillae) that give them a granular texture and serve to protect their delicate gills from sediment when buried. The order is also unusual for lacking suckers on their tube feet (i.e. these can’t crawl up the sides of an aquarium), an apparent adaptation for their fossorial lifestyle. And, for good measure, this group of stars lacks an anus, becuase, who needs one, really?. Archaster, on the other hand, is actually far more closely related to common aquarium stars like Linkia, Fromia and Protoreaster, all placed in the distantly related Order Valvatida. 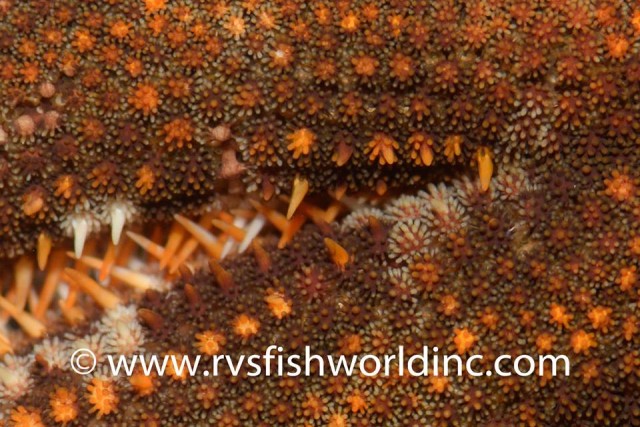 The Family Luidiidae is comprised of around 50 species, all placed in the genus Luidia, and occurs in tropical and temperate ecosystems around the world, generally being found in open expanses of sand or mud. One of the more common species found near Indo-Pacific reefs is L. maculata, a large star with 8-9 arms covered in dark blotches. Others in the genus show a more traditional appearance, possessing just five arms. 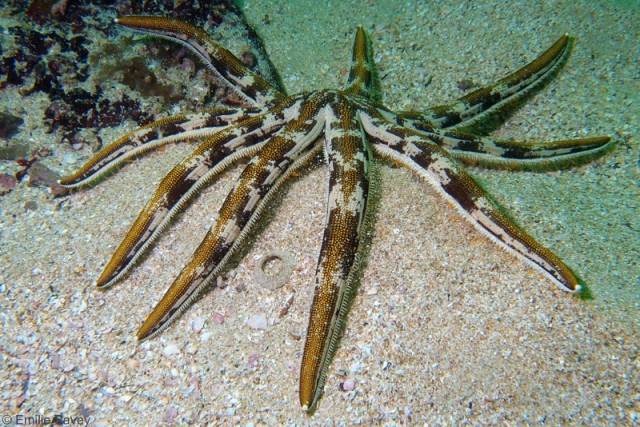 Luidia magnifica is one of the rarest and most impressive members. Known only from the Philippines and Hawaii at moderate depths, it is instantly recognizable in having 10 (or sometimes 11) arms, with bright orange tube feet on the underside and an intricate patterning of orange and brown paxillae dorsally. Capable of reaching an impressive 33 inches in diameter, this is also one of the largest sea stars in the world. The aquarium specimen illustrated in this post, which measured in at just six inches across, is obviously a long way from full grown, and, given its current size and resemblance to Archaster, it would be easy to assume this is just another harmless “sand-sifting” species.

On the contrary, Luidia are voracious predators and reputed to be the speediest of sea stars (clocking in at around 50mm/sec). Compared to the diet of Archaster (which is mostly comprised of muddy sediments and any associated infauna), Luidia is far more predaceous, actively consuming bivalves and other echinoderms, such as brittle stars, burrowing urchins and even other sea stars. THIS IS NOT A SAND-SIFTING SEA STAR! The closest comparison is to the well-known Sunflower Star of the Pacific coastline of North America, which reaches a similarly large size and hunts for its prey in an equally rapacious manner.

Compare the morphology between Luidia (left) and the common aquarium “sand-sifting sea star” Archaster (right). The latter has a series of rectangular ossicles (=superomarginal plates) along the dorsal edges. Credit: Ria Tan

Rather than extending their stomach to feed externally (as is customary), sea stars in the Order Paxillosida must swallow their prey whole—it should go without saying that a full grown L. magnifica would make a poor choice for most reef aquariums. Even a small specimen, like the one exported by RVS Fishworld, is ill-suited for any aquarium with benthic invertebrates in it. But, this species would make for a fascinating addition to a fish-only system devoid of the sort of echinodermivorous fishes (pufferfishes, triggerfishes, etc) which might consider it a tasty snack. 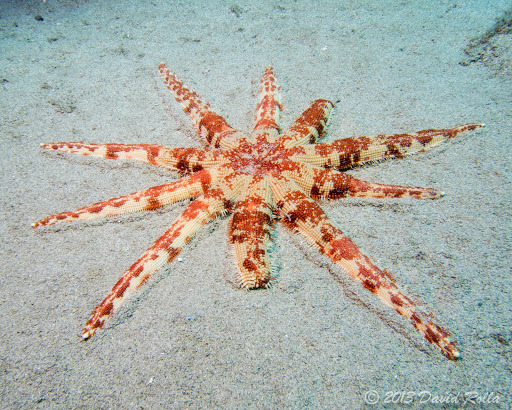 It’s important to remember that sea stars (particularly the larger species) are long-lived organisms, with a potential lifespan of multiple decades, so careful consideration should be taken when considering the longterm husbandry needs of a species like the Magnificent Star. An active carnivore like this requires regular (i.e. semi-daily) feedings of meaty foods, such as whole bivalves, shrimp, crabs, chopped fish and so on, but, otherwise, there isn’t likely to be any great challenge in growing this species to its full size. Obviously, such a large creature will necessitate an equally large aquarium, though the main concern here is in maintaining a reasonably low nitrate level and stable pH rather rather than providing a certain footprint for Luidia to amble about. Could a full-grown L. magnifica be kept in a 55 gallon aquarium… probably… though something triple that size is probably more appropriate. 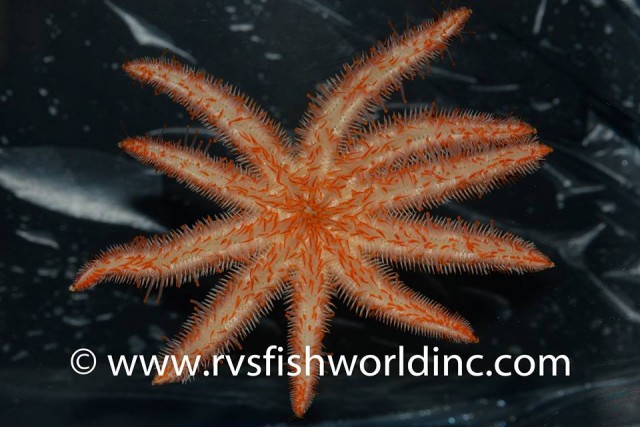 Given the rarity at which this species is encountered in the wild, coupled with its current low demand in the aquarium hobby, this will probably never be a sea star commonly found at your local fish store. But, if you’re looking for a murderous echinoderm large enough to walk on a leash, keep an eye out for Luidia magnifica. 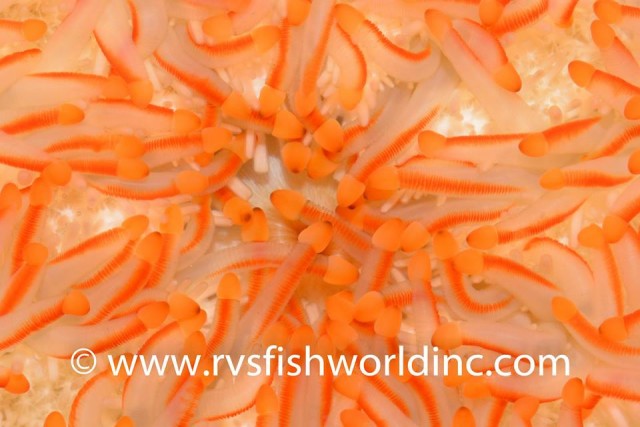