Major Taxonomic Changes For The Zooxanthellae

“Taxonomic rankings above the level of species are ultimately arbitrary constructs—useful only insofar as they convey meaningful information about the relationships among organisms.”

These are the pithy words punctuating a landmark paper on coral reef taxonomy. Writing in the journal Current Biology, researchers have at long last given a coherent nomenclature to the many disparate lineages of symbiotic dinoflagellates (i.e. the “zooxanthellae”) associated with corals, clams, and other reef organisms.

Symbiodinium was first scientifically described in 1962 for the symbiont associated with the Upside-down Jellies (Cassiopeia), and over the years this name would be applied to any morphologically similar alga. Examples can be found occurring in every ordinal branch of the anthozoan tree—stony and soft corals, tube and sea anemones, corallimorphs, zoantharians, and even among the black corals—but you’ll also see them in giant clams, acoel flatworms, sponges, soritid forams, and ciliates.

However, the original description states quite clearly that this genus was not intended to be a “taxonomic scheme for all zooxanthellae; it is merely to find a suitable position for the algal cells obtained from Cassiopeia.” Researchers began examining this group by culturing them outside their hosts, and it was soon determined that they were biochemically quite varied, each responding uniquely to any number of environmental variables (e.g. light, temperature, salinity, pollutants).

In 1980, it was shown that the group was equally varied in its genetics, and, in the years since, an informal naming system was developed for the hundreds of estimated species that had been discovered. Morphological distinctions proved to be elusive, and so these algae were instead labeled as to the evolutionary branch they were closest to. The commonest and most varied were those in Clade C. Many from Clade D proved to be exceptionally thermotolerant and found to proliferate during bleaching events. Certain clades appear to have a favorite host or might abound in certain biogeographical regions, but this classification is inherently unwieldy.

The solution to this might seem straightforward—just name the individual clades—but this is complicated by the limited morphological distinction between them. Only those in Clade C are readily diagnosed, as they lack a structure called the “elongate apical vesicle” or “acrobase”. Naming a group of organisms based solely on genetic distinctions has proven to be highly controversial, especially at the species level, where ambiguous naming practices can create all sorts of issues when it comes to environmental conservation.

The problem of applying this methodology above the species-level is more esoteric. What does it mean to be a “genus” or a “family”? These levels of classification imply a certain level of evolutionary isolation, but how do we determine when this is warranted and who gets to make this decision? At times, taxonomy can be an excessively conservative field of study, resulting in situations like we’ve seen with Symbiodinium, wherein hundreds of species with an evolutionary history stretching back tens of millions of years have been awkwardly lumped together. The confusion surrounding these enormously important algae has the potential to impede our ability to study and communicate about them, which is why their newly devised classification is such an important breakthrough. 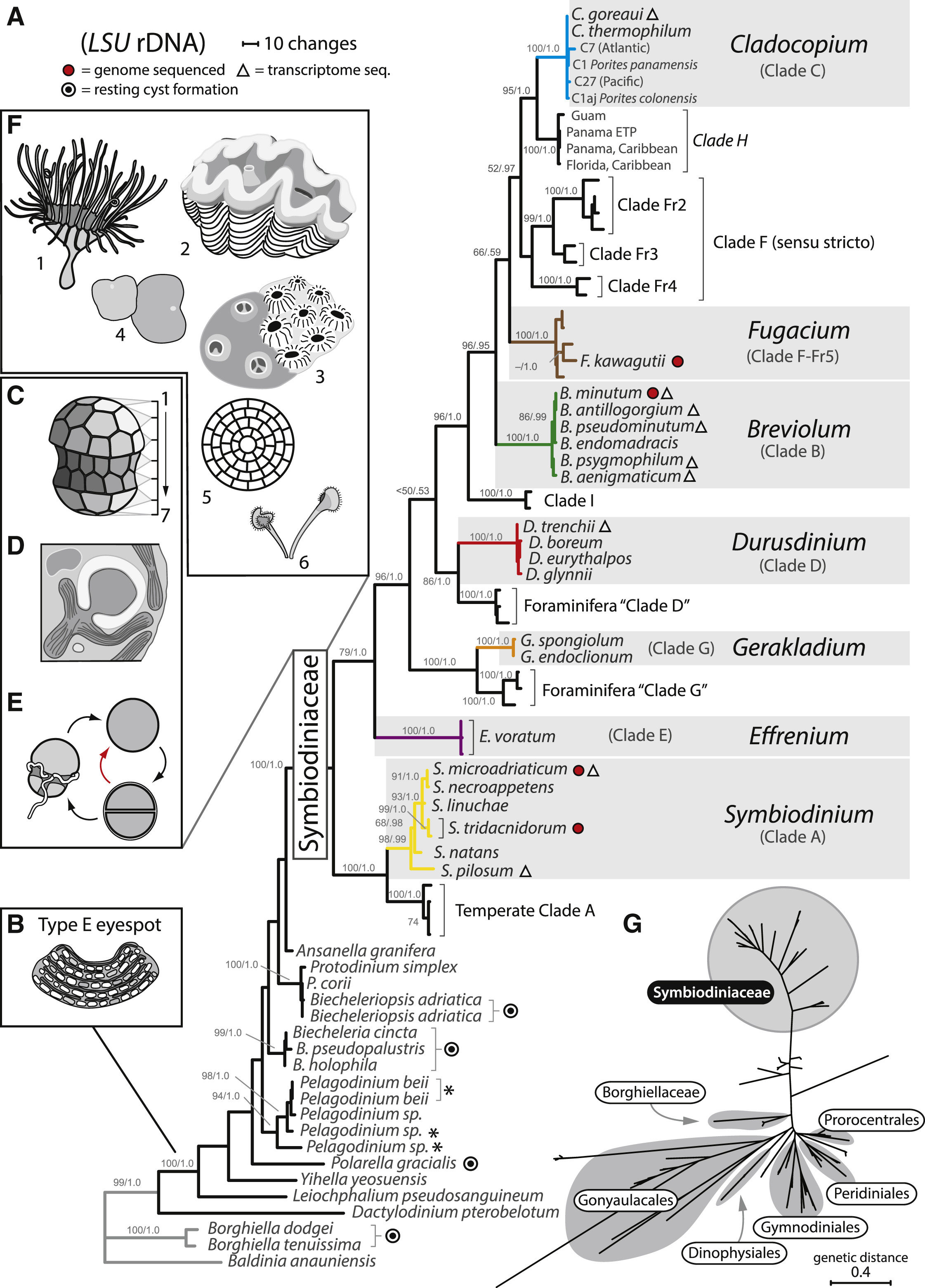 Symbiodinium still exists and is now restricted to those in the former Clade A, and its type species has been changed from S. microadriaticum (the species described from Cassiopeia) to S. natans. Though the initial description of S. microadriaticum was quite detailed, it is apparently deemed inadequate by modern phycological standards. S. natans, on the other hand, originates from netted specimens collected in the Canary Islands and grown in culture. Whether or not it is truly free-living or associates with a host remains unknown.

The newly established genera follow a convenient naming scheme, with the letter used to identify their evolutionary clade being used as the first letter of their new genus. Thus, Clade B is now known as Breviolum, which translates as “short, small ones”, owing to the small size of these species. They are abundant in Caribbean corals, while some of the basal species are reported from hosts in high latitudes.

Clade C is the most diverse in terms of its species-level diversity and the range of hosts that are utilized. These are now Cladocopium, meaning “plentiful branch”, in reference to this biodiversity. Clade D includes many species noted for being resistant to bleaching, and these are particularly abundant in coral reefs of the Persian Gulf, which are some of the hottest on the planet. This stress tolerance is alluded to in its new name, Durusdinium, meaning “tough”. Effrenium voratum is the only known species in Clade E. It lives in subtropical and temperate climes and is thought to be completely free-living, using its “tubule peduncle” to graze on bacteria. Its new name is, poetically enough, translated as “living unrestrained”.

Fugacium is applied specifically to one of the four subclades of Clade F, represented by the coral-associated F. kawagatii and other undescribed species known from forams and in free-living cultures. F. kawagatii was originally isolated from Hawaiian Montipora and subsequently found in Acropora, and a recent study of its genome showed that it lacked the genes responsible for producing the UV-protectant molecules known as Mycosporine-like Amino Acids (MAA). Instead, they rely on the ability of their host corals to make these photoprotectants. The genus name translates as “ephemeral”, as the various free-living species are said to be collected in low-abundance and are hypothesized to be transient parts of their ecosystems, perhaps being naturally short-lived.

Lastly, Clade G, now Gerakladium, is described as a rarely encountered genus known from the clionaid excavating sponges and the antipatharian black corals—a coral group not normally thought of as having zooxanthellate species. This is one of the “oldest” of these lineages, and the name reflects this, meaning “old branch”. Though note that both Symbiodinium and Effrenium are thought to have diverged even earlier than this, as reflected in the above phylogenetic tree.

What you’ll also see in that tree are several other unnamed branches. Clade H houses dinoflagellates found in Caribbean forams of the genus Sorites, none of which have been given species names, thus making it impossible to name the genus. A similar story exists for the three unnamed lineages in Clade F, each of which is expected to warrant recognition as its own genus owing to the genetic distance between them. And there are several others. In total, we now know of 15 distinct evolutionary lineages among the family Symbiodinaceae, but only seven are presently named.

And along with these new names comes a major new discovery for the group’s origins. By reexamining how they calibrated their phylogenetic reconstructions, it was determined that the last common ancestor of these dinoflagellates appeared far earlier than had previously been suggested. Earlier estimates put this in either the Palaeocene or Eocene, the epochs just after the end of the mesozoic, which marked not only the disappearance of the dinosaurs, but also around 80% of the known coral fauna.

This seemed like a reasonable cause for the emergence of such a successful group of photosymbionts, as the massive die-off would have created new niches to fill, but then what of all the corals that had existed before this? Reef-building scleractinians have a fossil record that stretches as far back as the Triassic (and possibly earlier still), and they presumably had the same metabolic requirement for a symbiodinacean-like organism. By updating some of the variables (phylogenetic, geographic, paleontological) used to arrive on these dates, a new hypothesis has been put forward, pushing their origin back by roughly 100 million years! Now, our best understanding is that Symbiodinium and its algal cousins emerged in the Jurassic, alongside a period of rampant diversification among the stony corals.