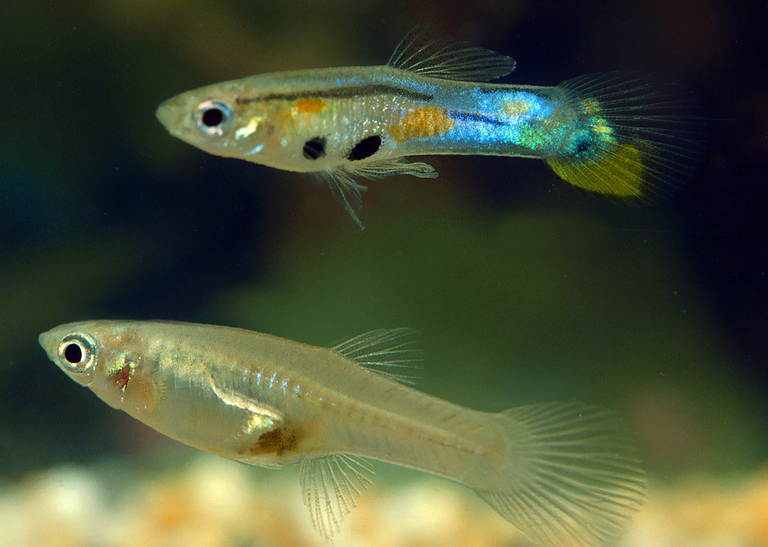 Male guppies have it hard.


From the Macquarie University:

Sexual harassment in the fish world—male guppies suffer most

Male guppies pay a high cost for their sexual harassment of female guppies – including much higher mortality rates – a new study from Macquarie University has found.

Sexual harassment in guppies, or unwanted male attention, is a product of males attempting to mate as many times as possible due to the low energy cost of sperm production.

In the study published in the journal Ethology, males spent more than 45 per cent of their day chasing females, and their mortality rate was more than three times higher when housed with females compared to being housed with males.

In contrast to the males, females seemed to show very little costs of constant male attention other than a reduction in social behaviour (schooling).

The females’ foraging behaviour, growth and the number of babies they produced were much the same when housed in groups with and without males.

“Sexual harassment is common and widespread in the animal kingdom, and researchers have traditionally looked at sexual harassment from the female’s perspective. A number of studies have shown that females suffering from harassment have less time to spend on other activities such as foraging and expend valuable energy avoiding unwanted male attention. But seldom do we pay much attention to the potential costs to males,” said Associate Professor Culum Brown.

Female guppies tend to be ‘choosy’ and want to mate less often owing to the high cost of egg production.

“We were surprised when we found so few effects of sexual harassment on females. We followed these fish for six months – a long time in the life of a guppy – and we did not detect many differences in their behaviour, growth or the number of babies they produced. We suspect that nature has a way of reducing the costs of harassment to females, especially in those species where it is a constant fact of life,” said lead author Michelle Jerry.

“Previous studies have been focused on the females who are constantly being chased, and we lost sight of the fact that chasing females for mating is really hard work. In hindsight, perhaps it is not all that surprising that males, particularly large males, ultimately pay a big cost for all that ‘action’,” says Associate Professor Brown, head of the fish lab at Macquarie.

Guppies are small fish native to Trinidad but have been introduced to streams in northern Australia. The males are brightly coloured and spend a significant portion of their lives chasing and displaying to females. Females are constantly pregnant and give birth to live young.