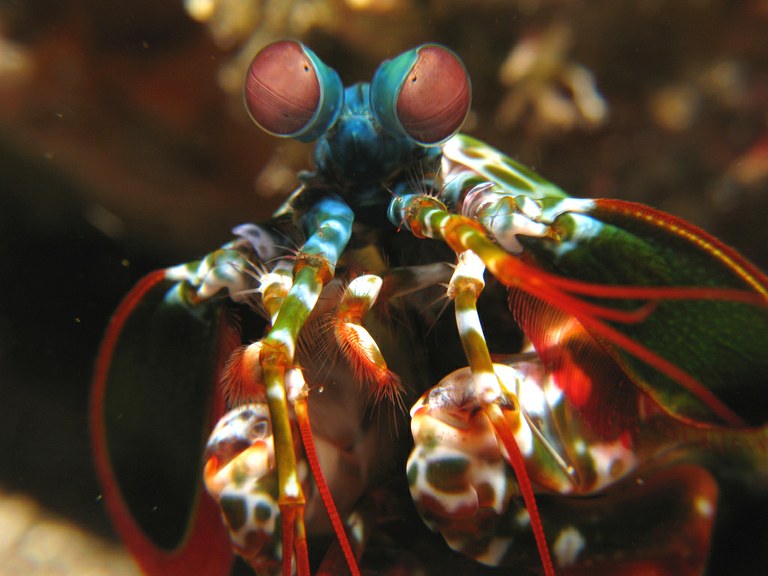 
Mantis shrimp, order Stomatopoda, actually come in two flavors: spearers and smashers. Spearers as the name implies, spear their prey with a spear-shaped claw. Smashers, on the other hand, smash their prey with a claw resembling a club.  These clubs travel faster than a 22-caliber bullet and withstand +50,000 repeat clubbings over the lifetime of the mantis shrimp.  That is one tough claw!  What are these claws made from that allow them to withstand repeat beatings without fracturing and breaking?

Weaver, Milliron, Kisailus and others now understand how the club works and they reported their findings this week in the journal Science.

They discovered the club is made up of multiple zones with very different material properties.  The outer portion of the club (the surface that directly impacts the prey item) is made from a material very similar to our bones (called hydroxyapatite).  These cylindrical crystals are oriented perpendicular to the surface which adds strength to the impacting surface. The zone directly under this bone-like material is made from chitin, which is what the mantis’ shell is made from and act like additional shock absorbers and dissipate the impact further.  Finally, the club is covered with more chitin fibers helping hold the club together.

The reason why this is so intriguing to materials engineers is the applications potential. Better impact resistance could lead to anything from next generation automobiles to etter body armor.  Body armor improvements are Kisailus’ current focus as body armor adds up to 30 pounds to a person’s weight. Their goal is to make body armor that is 1/3 the weight and the same thickness as current body armor.

As an example of what a mantis shrimp can do with its claws, watch as one destroys a clam shell: