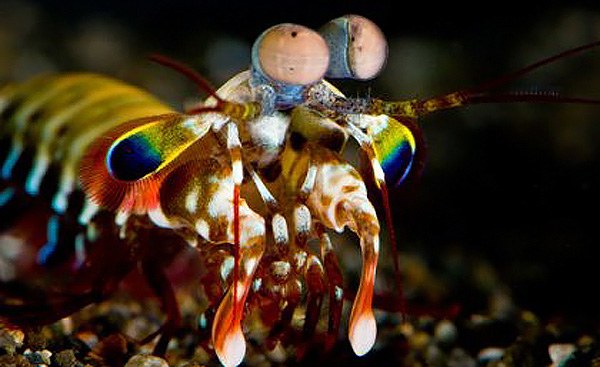 
From the University of Queensland

Mantis shrimp eyes are inspiring the design of new cameras that can detect a variety of cancers and visualise brain activity.

University of Queensland research has found that the shrimp’s compound eyes are superbly tuned to detect polarised light, providing a streamlined framework for technology to mimic.

“Humans can’t see this, but a mantis shrimp could walk up to it and hit it,” he said.

“We see colour with hues and shades, and objects that contrast – a red apple in a green tree for example – but our research is revealing a number of animals that use polarised light to detect and discriminate between objects.

“The camera that we’ve developed in close collaboration with US and UK scientists shoots video and could provide immediate feedback on detecting cancer and monitoring the activity of exposed nerve cells.

“It converts the invisible messages into colours that our visual system is comfortable with.”

“Polarised sun-glasses are the most common technology we use every day, to reduce glare from water and wet roads,” he said.

“They work because reflected light from these surfaces is polarised one way and the glasses are polarised the other.

“Even with polarising sunnies, the level of sensitivity needed to see neurons fire and reveal cancerous tissue is right at our current limit.

“Nature has coming up with elegant and efficient design principles, so we are combining the mantis shrimp’s millions of years of evolution – nature’s engineering – with our relatively few years of work with the technology.”

Theoretically, the research could lead to the redesign of smartphone cameras, allowing people to self-monitor for cancers and reduce the burden on health systems, Professor Marshall said.

“The combined team is a good example of how interdisciplinary collaboration in science – between visual neuroscience, physics and electro-optical engineering – can provide really productive new approaches,” Professor Marshall said.

“My expertise is in finding and describing the design components of the visual systems in nature and then recognising where the engineers may use these natural innovations.”

The Australian Research Council, the Asian Office of Aerospace Research and Development and the US Airforce Office of Scientific Research are funding the work.

The research, Bio-Inspired Polarization Imaging Sensors: From Circuits and Optics to Signal Processing Algorithms and Biomedical Applications, is published in IEEE.