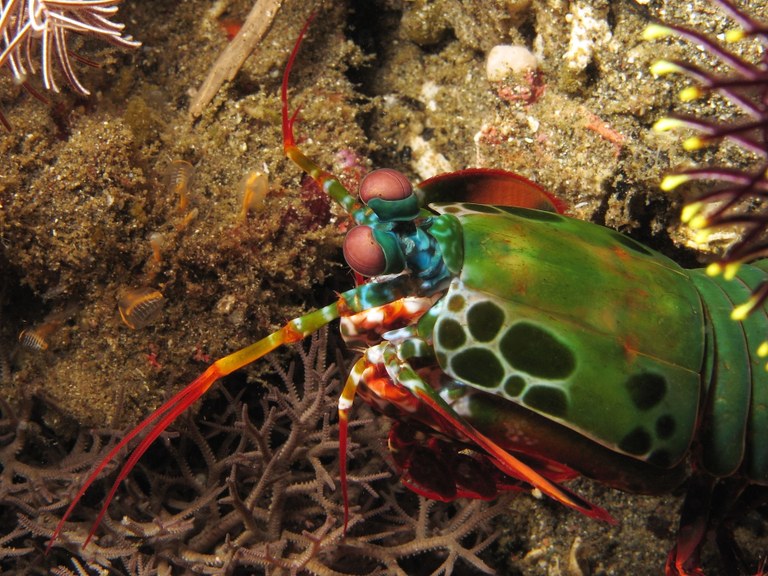 From the viewpoint of natural selection, monogamy might be considered a dead end. Species should be more successful when individuals mate with as many partners as possible, leading to a greater number of offspring with more genetic diversity. But researchers at the University of California (UC), Berkeley, are turning to an odd example—the mantis shrimp—to dig for deeper reasons for why some animals mate with one partner for life.

Social monogamy, where one lives and shares resources with a single partner for an extended period of time, is rare in nature. So why did it evolve at all?

“Probably most commonly discussed is a need for biparental care,” says Dr. Molly Wright at UC Berkeley, who studies the evolution of animal behavior. She’s referring to the idea that in socially monogamous animals, both sexes tend to take care of the young. Even though such partnerships tend to produce fewer or less genetically diverse offspring, these offspring have a better chance of surviving to maturity because both mom and dad are caring for them.

Although this trade-off makes sense, there’s one problem. Scientists have only found evidence for it in a narrow range of species, mainly in birds and mammals.

Mantis shrimps, an ancient lineage of crustaceans, are decidedly neither birds nor mammals. Also known as ‘stomatopods’, they have been largely studied for their amazing eyes, considered to be the most complex among animals, and their claws, which deliver the fastest punch in the animal kingdom. Their punches are actually so fast that they create cavitation bubbles in the water, which produce light and heat upon collapse.

The charismatic mantis shrimps have even garnered their own popular “True Facts” video on YouTube and an internet cartoon.

However, Wright was more interested in the true fact that some species of mantis shrimps practice social monogamy. She noticed something odd while studying them for her PhD in the coral reefs of French Polynesia:

“We saw that stomatopods were living at higher densities farther away from coral heads, and that wasn’t what we were expecting.” Wright expected to see more burrows near the coral, where the small fish and invertebrates that mantis shrimp feed on are abundant.

The unexpected finding that mantis shrimp seemed to prefer being far away from their food source prompted Wright to note that the corals were also where the larger fishes that eat mantis shrimps are found. Avoiding predators may be especially important for socially monogamous mantis shrimp species, because unlike some of their promiscuous relatives, they have a less armored shell.

“Our surprising data made me wonder what role predation was playing in shaping social monogamy and mating systems in general,” Wright says.

Wright tested two competing ideas to figure out if avoiding predation might have been the driving force behind the evolution of monogamy. If biparental care evolved early in the monogamous mantis shrimps, either at the same time or slightly before the evolution of social monogamy, then the classic hypothesis of a need for biparental care would apply to mantis shrimps. On the other hand, if social monogamy co-evolved with a sedentary lifestyle characterized by sit-and-wait predation, it would suggest monogamy is tied to the mantis shrimp avoiding becoming prey.

To test these competing ideas, Wright mapped life history traits onto an evolutionary history of mantis shrimps. Her results strongly went against the classic hypothesis, since she found that a sedentary, sit-and-wait lifestyle went hand-in-hand with social monogamy, but biparental evolved after social monogamy.

She reasons that after the evolution of a sedentary lifestyle, mantis shrimps would have been most vulnerable to predators when they ventured out to find a mate.

The solution? Settle down in the suburbs away from the hustle and bustle of the reef.

Similar to bachelors and bachelorettes growing tired of the loud music at the bar scene, it seems mantis shrimps may have opted for living a longer life, albeit with only a single mate.

Although Wright admits, “I generally try to be careful about what I say about human mating systems,” one can’t help but draw a parallel between marriage and a sedentary lifestyle in our species as well, and Wright hopes that her research will ultimately clarify the evolution of mating systems across animals.

Wright presented this research at the annual conference of the Society for Integrative and Comparative Biology in West Palm Beach, Florida.

[via Society for Integrative and Comparative Biology (SICB)]