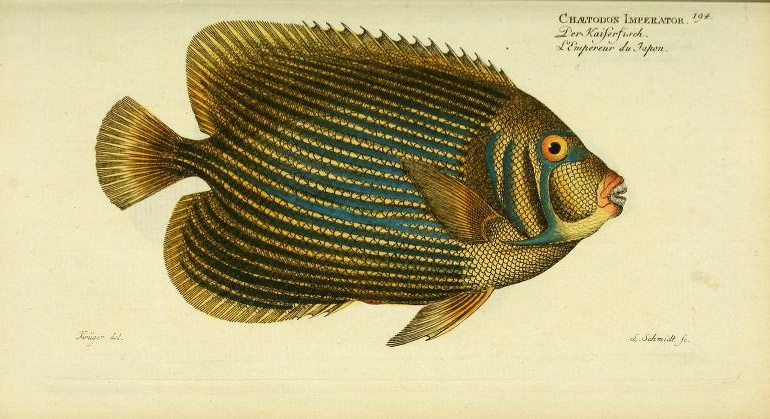 Bloch was the first to scientifically describe and illustrate the familiar Imperator Angelfish.

The study of coral reef fishes is a relatively recent field within ichthyology. The earliest scientific works, by naturalists such as Artedi, Linnaeus and Forsskål, consisted of little more than a series of terse morphological descriptions, completely lacking any accompanying illustrations. For the average reader interested in these exotic new species, a vivid imagination or access to museum specimens was required to have any idea what these taxa might have looked like in life. 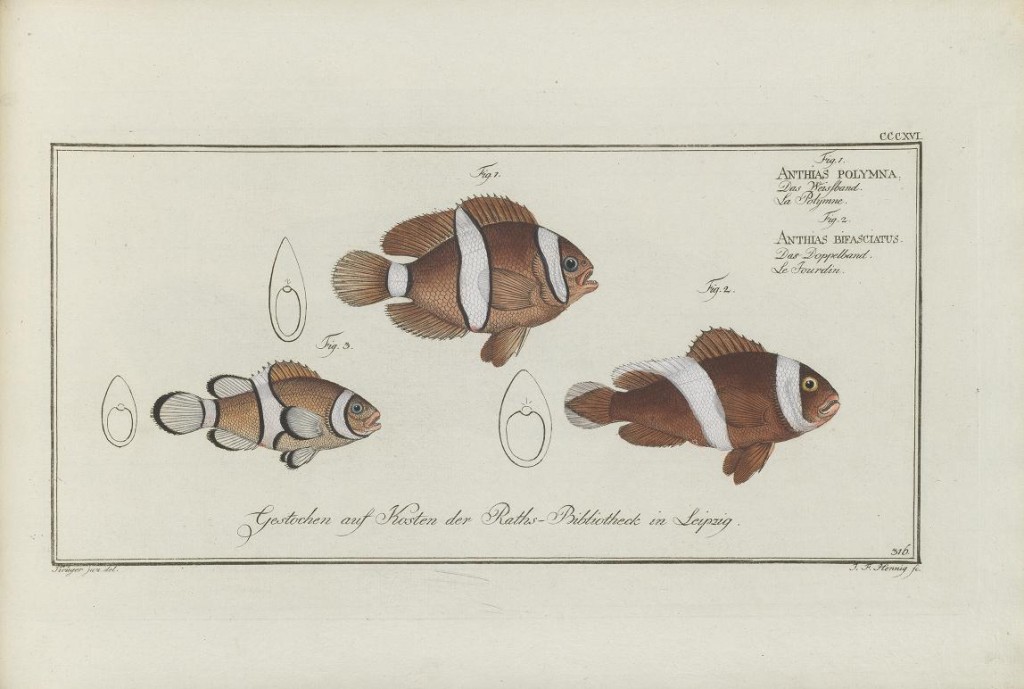 Note how these clownfishes are classified as “Anthias”. Early scientific names often had a completely different meaning than the current usage.

One of the first compendiums to be fully illustrated was the work of 18th-century German doctor and naturalist Marcus Elieser Bloch. His Allgemeine Naturgeschichte der Fische (General Natural History of Fishes) , published in volumes from 1782-1795, described 176 new species, many of which are common and familiar aquarium species. Bloch was a keen observer of the natural world, but, like other early taxonomists, he had a weak understanding for how to coherently organize the bewildering diversity of life found on the reefs. 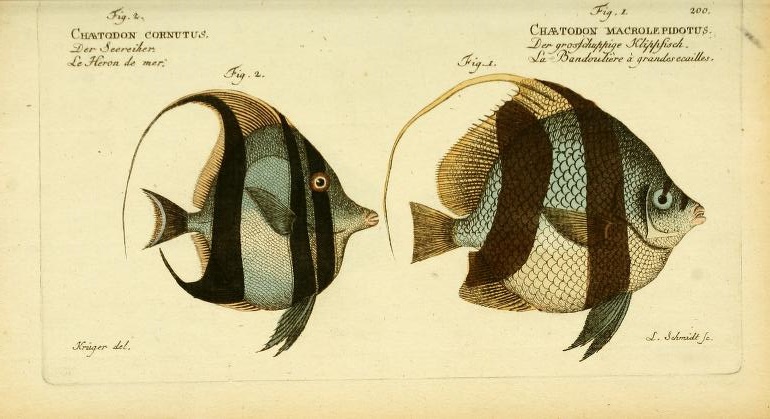 The superficial similarities of the Moorish Idol (Zanclus cornutus) and the Schooling Bannerfish (Heniochus acuminatus) clearly fooled Bloch, who placed both into his broad concept of “Chaetodon”.

Many familiar scientific names are used broadly to group what we now know to be distantly related fishes. A name like Chaetodon might refer to a butterflyfish (as it does today), but it could also refer to an angelfish… or a batfish… or a rabbitfish… or a damselfish… or a moorish idol… or a surgeonfish… or a scat… or even a pompano! 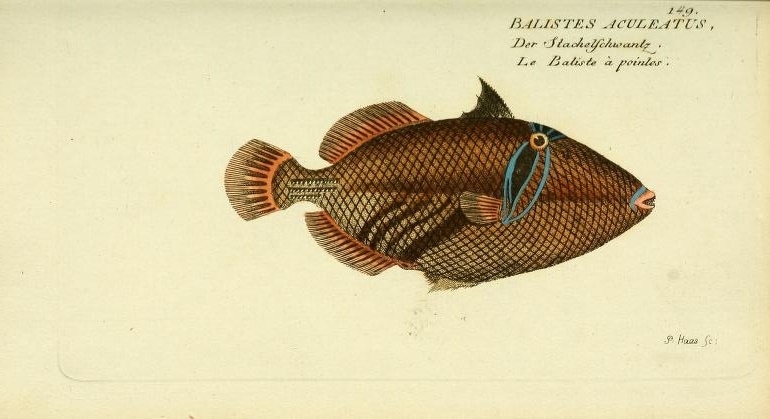 This is likely the first image of a Picasso Triggerfish, which had been described by Linnaeus a few decades earlier in 1758.

Looking through Bloch’s treatise provides us a glimpse into our earliest efforts to understand and organize the diversity of life swimming around coral reefs. While his inchoate efforts at zoological classification may not have stood the test of time, the beautiful illustrations Bloch commissioned for his publication are some of the first accurate reproductions ever printed. In recognition of his considerable efforts, the Ringtail Surgeonfish (Acanthurus blochii) was named in his honor… though he probably would have called it Chaetodon blochii, amirite? 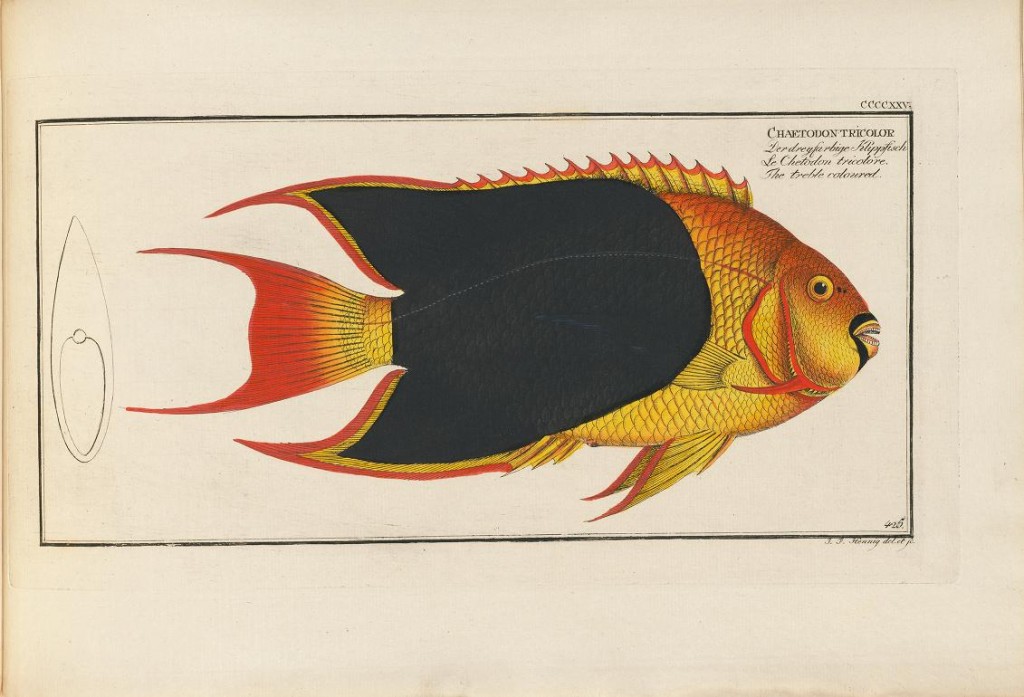 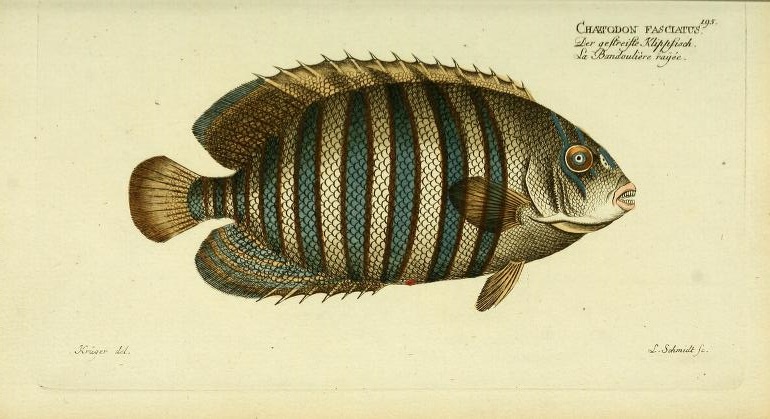 Regal Angelfish (Pygoplites diacanthus), seen as “Chaetodon fasciatus”. This species was originally described by Boddaert in 1772 as Chaetodon diacanthus, unbeknownst to Bloch. If the Indian Ocean population is ever recognized as a distinct species, it neither of these names can be used for it, and there are no other synonyms in the literature. 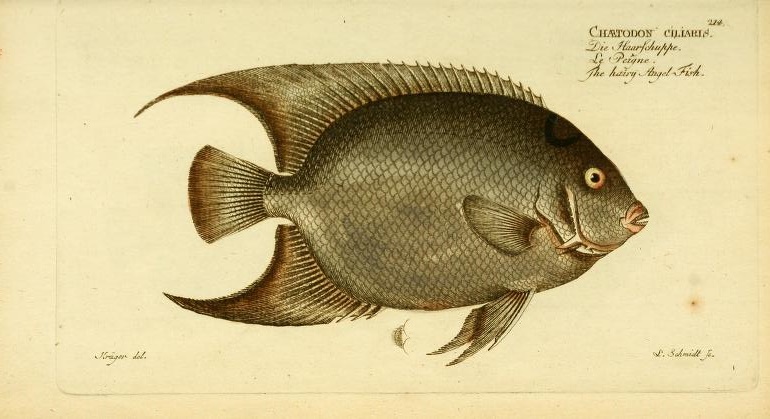 This Queen Angelfish (Holacanthus ciliaris) seems to have been illustrated from a preserved specimen. 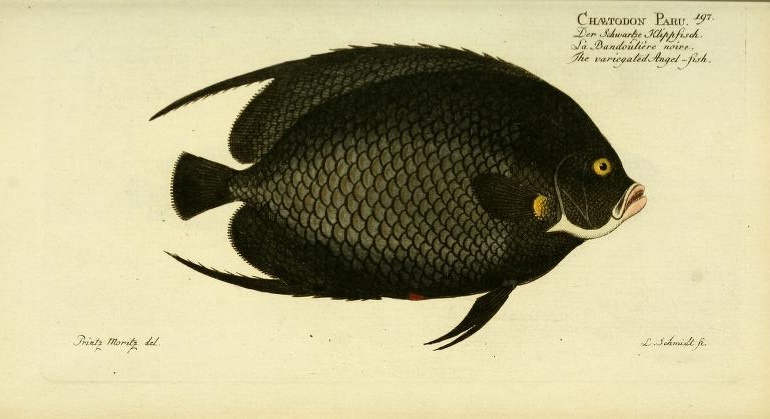 French Angelfish (Pomacanthus paru) is credited to Bloch, as he is the first to depict it in any descriptive sense. The name actually originated in the early work of Forsskål , but without any description of the actual fish. 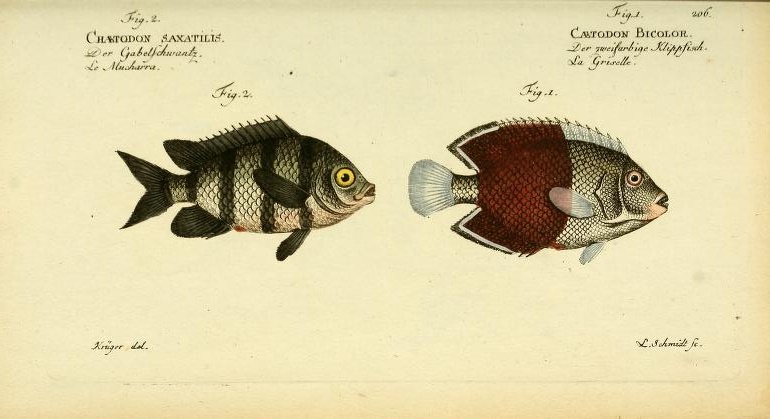 A Seargent Major (Abudefduf saxatilis) and a Bicolor Angelfish (Centropyge bicolor). Note how the colors of the latter are washed out, presumably from preservation in alcohol. 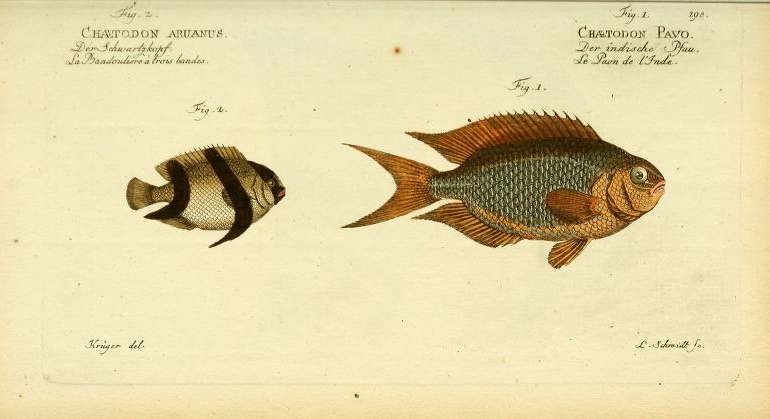 Bloch was the first to describe the beatuiful Sapphire or Peacock Damselfish (Pomacentrus pavo), but it has clearly already lost its color in alcohol. His illustration of Three-stripe Damselfish (Dascyllus aruanus) is a little off, as this fish has a higher body profile. 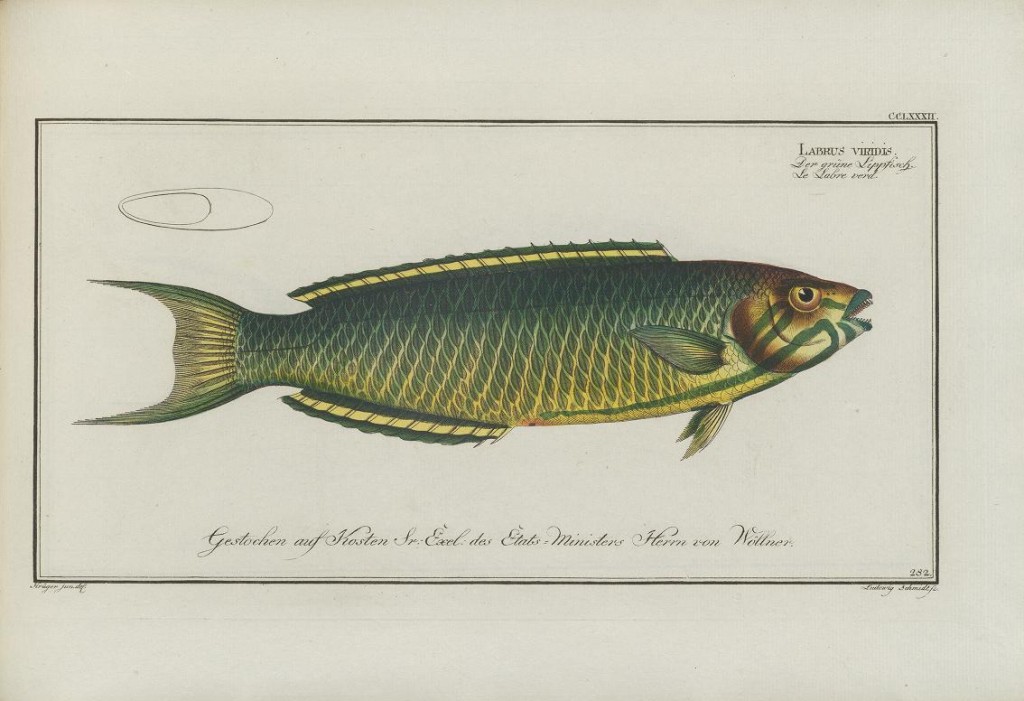 This is a rather dully illustrated Lunare Wrasse (Thalassoma lunare). Here Bloch classifies it as “Labrus viridis”, which Linnaeus had already used for an entirely different Mediterranean wrasse. 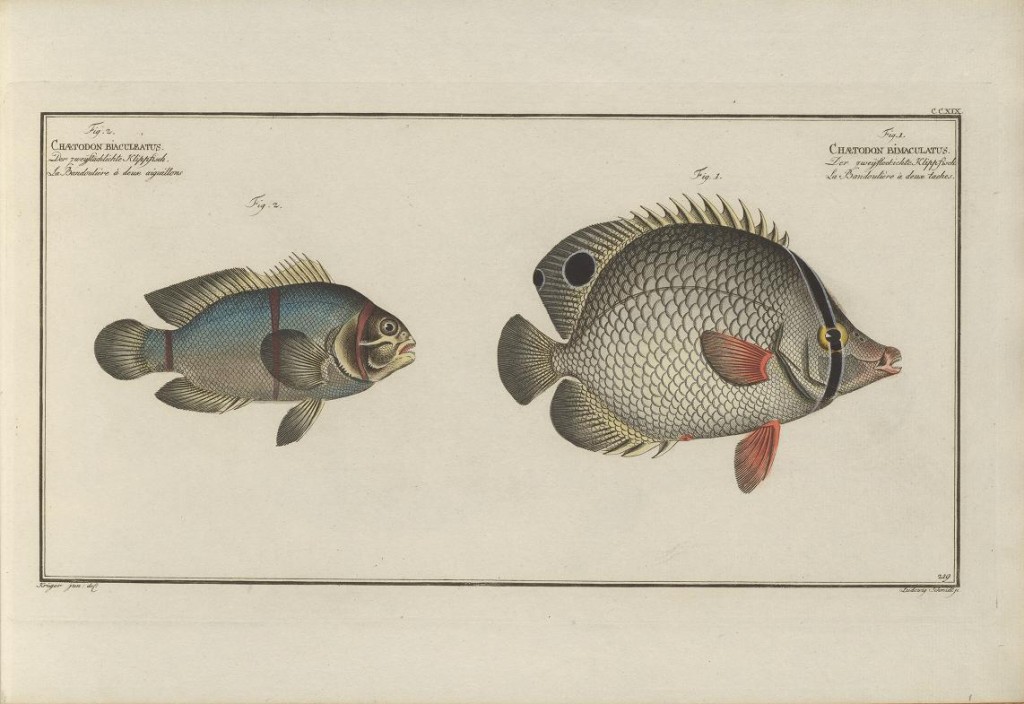 Bloch didn’t quite capture the chromatic splendor of a living Maroon Clownfish (“Premnas” biaculeatus) here, though he still gets credit for describing it first. The fish on the right is the West Atlantic Chaetodon ocellatus, which Bloch did not describe first. 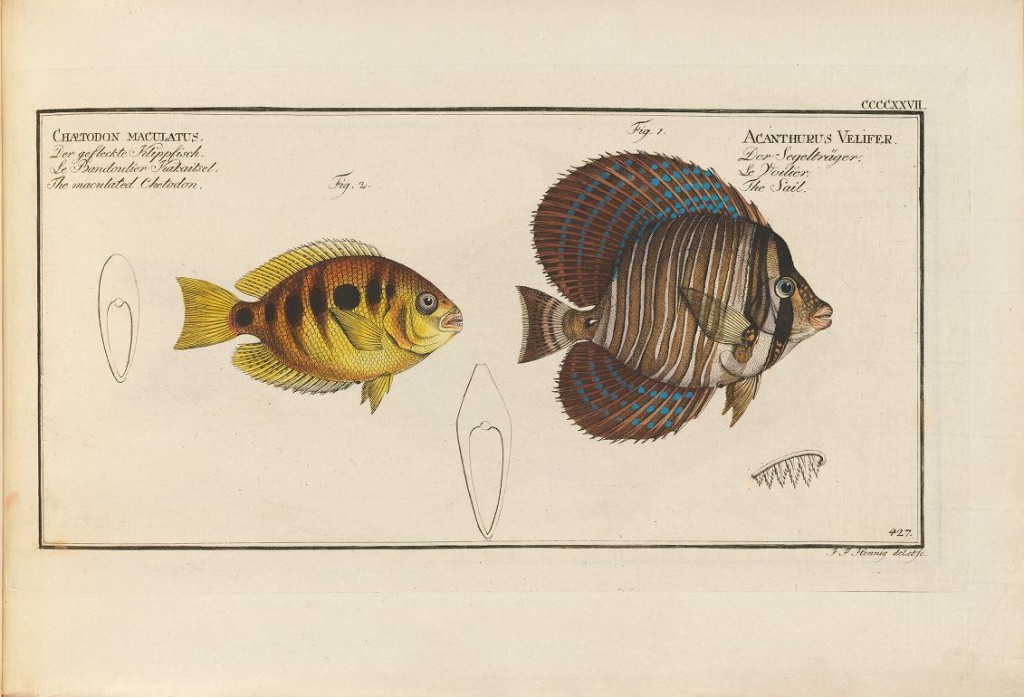 That’s a brackish water cichlid on the left (Pseudetroplus maculatus), which Bloch described, and the Sailfin Tang on the right is from India and is the type specimen for velifer, but, strangely, this is the name now used for the Pacific species. The specimen illustrated by Bloch is what we now call Zebrasoma desjardinii, though this species name was described after Bloch’s “velifer”. Clearly more taxonomic work is needed to sort this out. 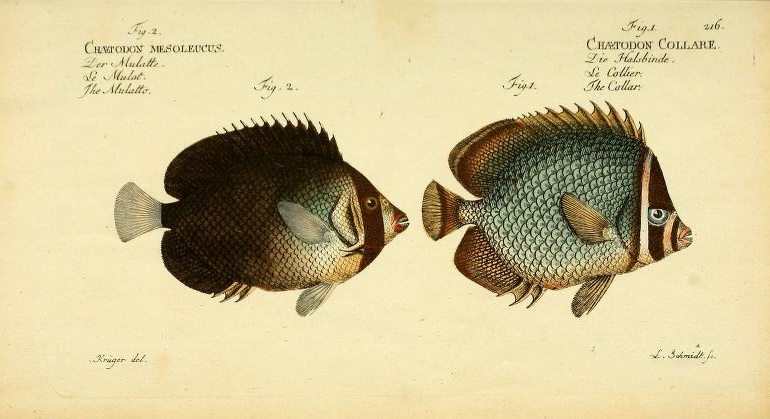 The Singapore or Vermiculated Angelfish (Chaetodontoplus mesoleucus) and the Collared Butterflyfish (Chaetodon collare), both described here by Bloch. Note his amusing common names for these, the “Mulatto” and the “Collar”, respectively. 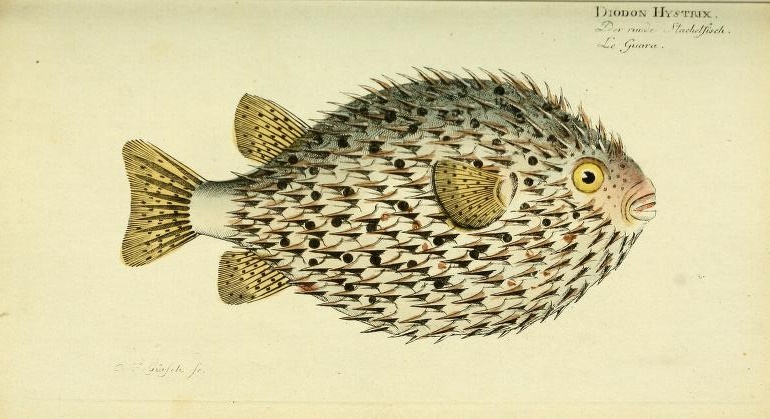 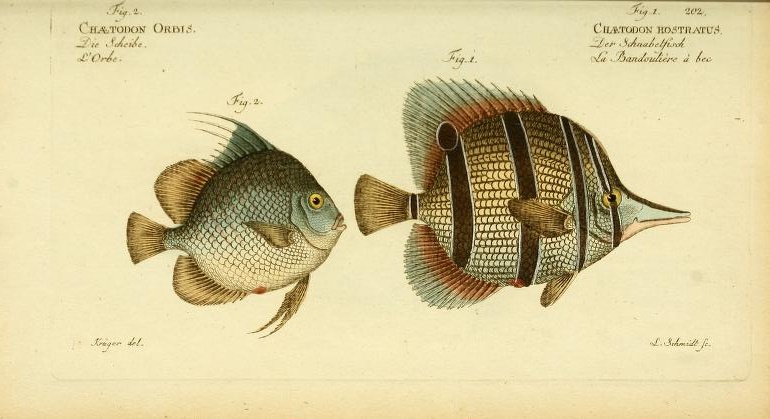 The Orbfish (Ephippus orbis) on the left was described by Bloch, the Copperband Butterflyfish (Chelmon rostratus) on the right was Linnaeus’ work. 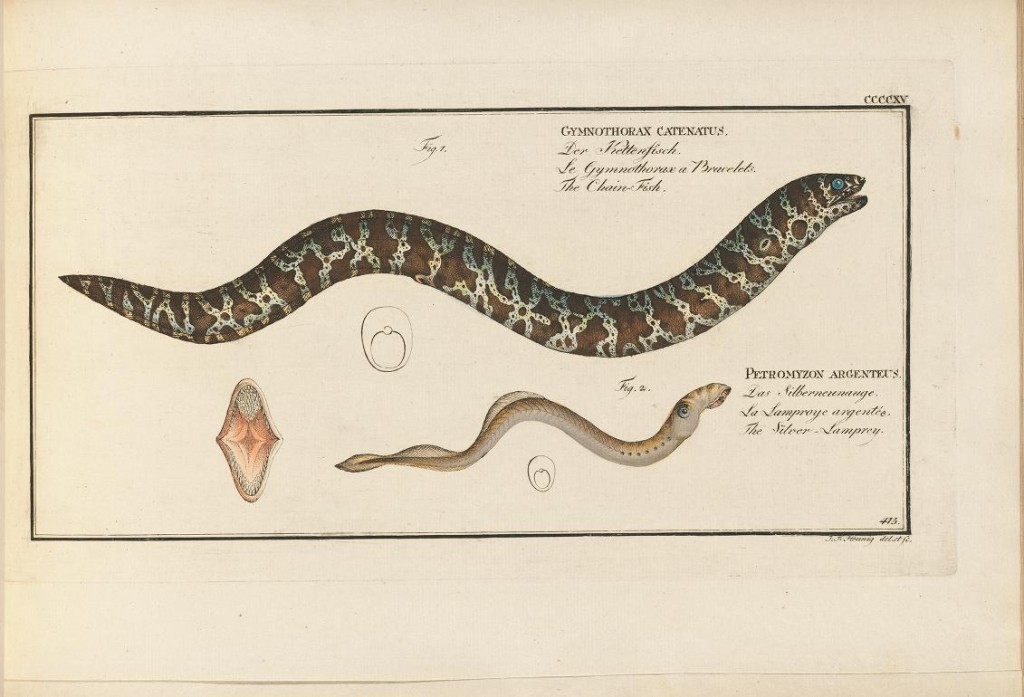 A Chainlink Moray (Echidna catenata), described by Bloch, seen alongside another eel-like fish, a lamprey. 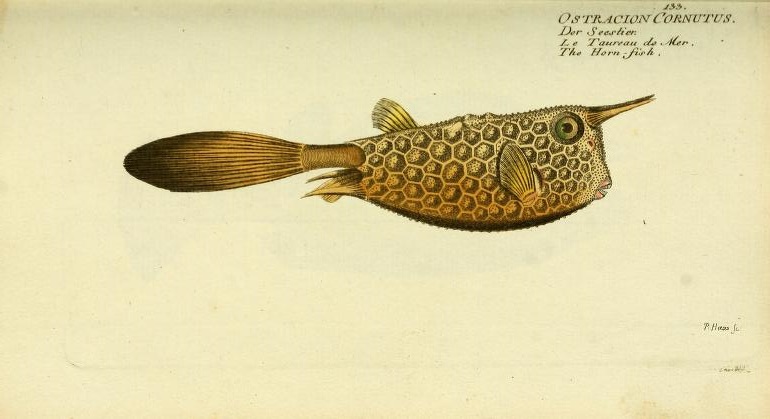 Long-horned Cowfish (Lactoria cornutus). As bizarre in the 1700’s as it is today. I like Bloch’s common name of “Horn-fish” 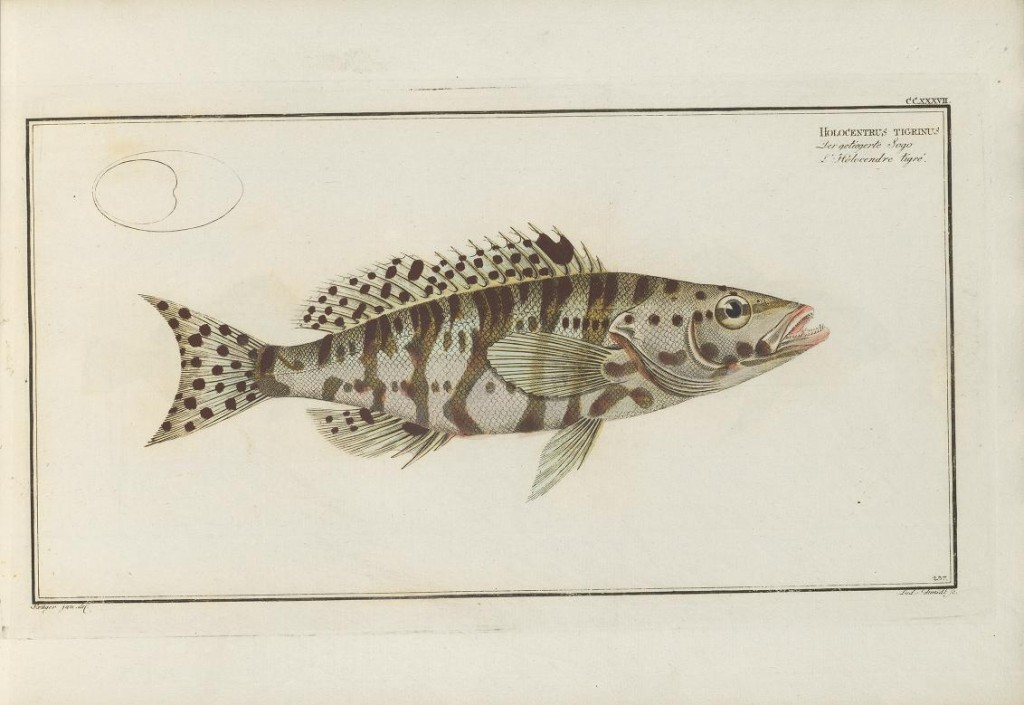 This is the Harlequin Basslet (Serranus tigrinus) of the West Atlantic. Bloch uses the name Holocentrus for it, which we now restrict to certain Squirrelfishes. Taxonomy has come a long way. 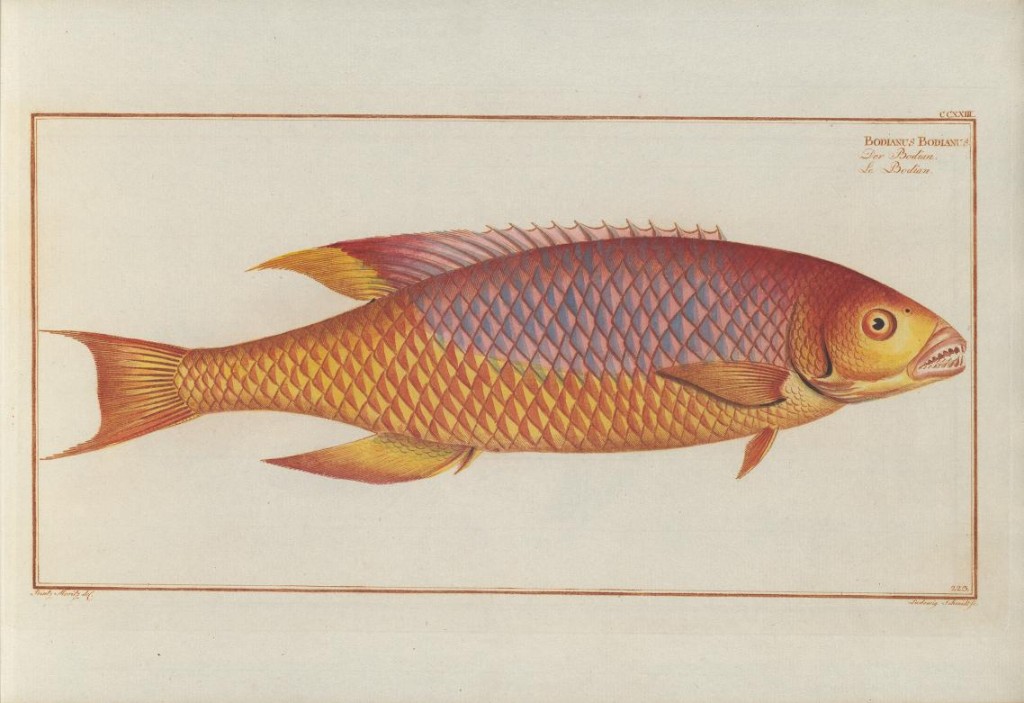 Here Bloch describes the genus Bodianus, using it for the Spanish Hogfish (Bodianus rufus). Interestingly, Linnaeus had already described this species as “Labrus rufus”, so Bloch only gets credit for establishing the genus, not the species. 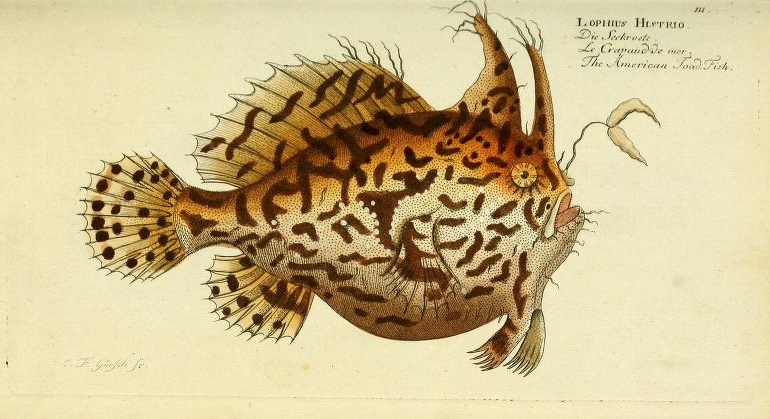 How can you not love this illustration of the Sargassum Anglerfish (Histrio histrio). 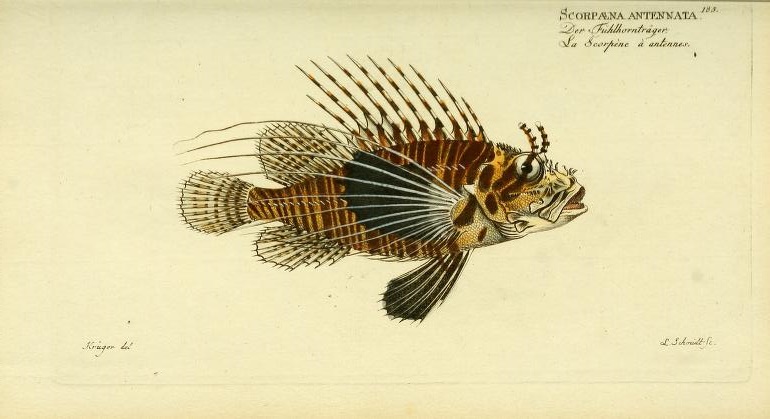 Bloch was first to describe the Antennata Lionfish (Pterois antennata). 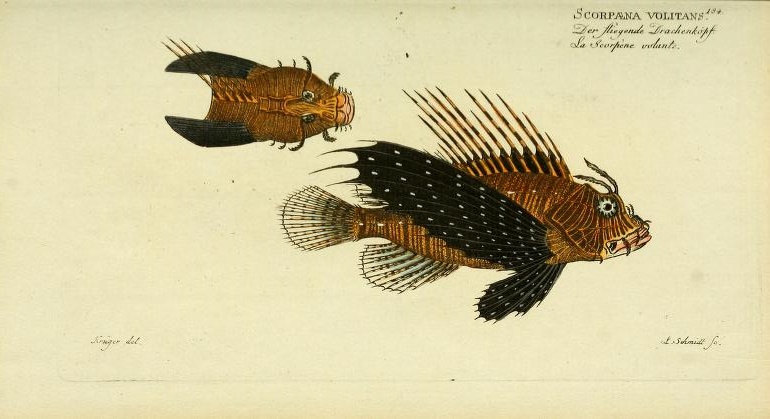 This is likely Pterois miles, the Indian Ocean counterpart to the Volitans Lionfish.