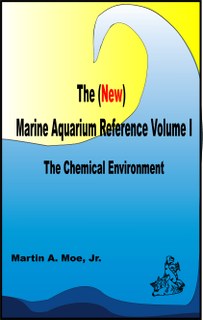 
Martin Moe, Jr. is the pioneering marine biologist and fish aquaculturist that largely shaped the marine aquarium hobby (and particularly marine ornamental breeding) into what it is today.  His watershed books in the early to late 1980s to early 1990s helped elevate our hobby from casual pastime to a modern science-based avocation.

Moe has written many books and articles (including  articles for Advanced Aquarist).  His two most notable publications are The Marine Aquarium Handbook (the all-time bestselling saltwater aquarium book covering beginner topics all the way to breeding) and The Marine Aquarium Reference: Systems and Invertebrates (the bible of advanced marine aquarists everywhere for the greater part of two decades). Both books contained huge amounts of detailed information yet are extremely easy and delightful to read (even read front to back like a novel).

Moe will release the expanded and updated edition of The (New) Marine Aquarium Reference as a five volume ebook series, with the first volume The Chemical Environment available to download now for only $5.99.  To give you an idea how much new information the new volume (and series) will contain:

According to Smashword (where you can purchase Volume 1: The Chemical Environment), “The other four volumes are Volume II: The Physical and Biological Environment, Volume III: Elements of Marine Aquarium Systems, Techniques and Technology, Volume IV: Marine Aquarium Systems, Foods and Feeding, and Volume V: Marine Invertebrates, The Organization of Life in the Sea. These additional volumes should be available by 2015.”