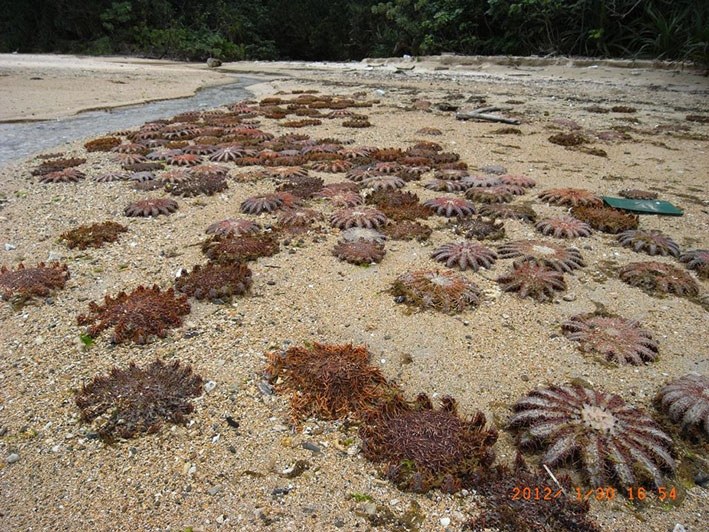 
Crown-of-thorns starfish (Acanthaster planci) are fierce predators of coral reefs – especially of their favorite meal: scleractinian (stony) corals like Acropora. As we reported previously, these starfish can eat up to 6 square meters (65 square feet) of coral cover each year per starfish. They can destroy a large chunk of the reef when their populations swell. But what happens to them when their food source runs out?

Researchers Suzuki, Kai and Yamashita reported this week in the scientific journal Coral Reefs about one event that can happen when their food source runs out: mass strandings of crown-of-thorns starfish.

They report that in January of 2012 in Urasoko Bay, Ishigaki Island (southern Japan), 806 crown-of-thorns starfish (Acanthaster planci) were found stranded on a 330 yard section of a beach (pictured above). The researchers observed that these crown-of-thorns starfish invaded the Acropora-rich reef around Urasoko Bay and then headed into the inner bay toward the end of 2011 in search of food. The researchers believe after the crown-of-thorns ran out of Acropora to gorge on,  they became emaciated and in their weakened condition congregated in the shallows at high tide. When the tide went out, they were stranded and subsequently died. This phenomenon was also reported twice in the local papers: once in February 2011 and another in August 2011.

Suzuki, Kai, and Yamashita noted that:

…these observations possibly provide an answer to the question of what happens to COTS when they have completely depleted their food, at least on reefs within lagoons and around islands. On other reefs with different morphologies and hydrodynamic settings, COTS die and disintegrate on or near the reef, as evidenced by the finding of COTS spicules in near-reef sediments.

Goes to show: Gluttony is truly a deadly sin.