Meet The New Groupers, Same As The Old Groupers

For the past decade, there has been some residual uncertainty when it came to the correct scientific names used for groupers. In 2007, Craig & Hastings published a seminal study investigating the phylogenetic relationships of the group and found a number of instances where our morphology based classification disagreed with the evolutionary picture painted by genetic data. Several small genera of reef-associated groupers—often those possessing some distinctive morphological trait—were found to represent specialized lineages within larger genera.

A fine example of this can be seen with the Slender Grouper, an interesting mimetic species seen on occasion in the aquarium trade. It has been known under the name Anyperodon leucogrammicus since 1895, and was separated based on 1) an elongated body and 2) the absence of palatine teeth. But genetics consistently placed it as a derived member of the highly diverse Epinephelus, and, as emphasized in a new study (Ma & Craig 2018), it actually isn’t any more elongated than some of the other members of that genus. All that is really unique about it is the missing palatine teeth (and perhaps the juvenile mimicry of labrids), and so it is formally reclassified as Epinephelus leucogrammicus.

But, interestingly, this isn’t the first time that this exact name change has been put forth. The original study from 2007 did just this, but that proposal largely fell on deaf ears. For many taxonomists, these sorts of nomenclatural changes are controversial when based solely on molecular data, so going onto wikipedia or fishbase or WoRMS or any other major website today will still show the old name. As the IUCN states, Anyperodon is “retained here until there is full agreement on this revision.” But what constitutes “full agreement”, and who gets to decide when that vague criterion has been met? These are important considerations given the economic significance of these fishes.

A similar change was made for the Panther Grouper (Cromileptes altivelis), a distinctive black-spotted reef fish that most aquarists have likely been tempted to purchase (don’t… they get big). This species differs in its unusual body shape, with a flattened head profile that abruptly rises towards the dorsal fin, giving a humpbacked appearance. But this little tweak to its shape is the only significant difference between it and all the other Epinephelus groupers, and, once again, it’s closest genetic relatives reveal it to be a derived member of that genus. So Cromileptes is no more.

Two of the more interesting changes relate to groupers that have independently evolved a semi-pelagic lifestyle, adopting a few morphological peculiarities in the process. One is the Oval Grouper (Triso dermopterus), which resolves among a group of drably colored species in the genus Hyporthodes (none of which have any standing in the aquarium trade).

The other example of this are the pair of species in Paranthias, which, despite the name, are of no close relation to the true anthias. These two species have long been recognized as distinct owing to their “deeply forked tail, high gill raker counts, and small teeth” along with their highly pelagic feeding ecology, but, again, we find that the genetic data does not support this. Paranthias appears instead as a specialized branch of Cephalopholis, known commonly as hinds. And we have further evidence of their close relatedness in the form of hybrids of these two, which at one time were recognized as a separate genus, Menephorus.

And there are plenty more changes that I’ll just briefly mention here. The rarely seen Masked Grouper (Gracila albomarginata) is one of the most beautiful members of this family, with purple and red juveniles that appear to mimic anthias. It was separated into its own genus by John Randall based on 1) a shorter head relative to the Cephalopholis hinds and 2) an emarginate caudal fin. However, it’s really only the semi-pelagic juveniles that have this latter feature and the head length falls within the range seen among other hinds, and so it now finds itself reclassified as a specialized Cephalopholis. The same holds true for the Redmouth Grouper (Aethaloperca rogaa), which was originally split off from the hinds based on minor differences in its shape. 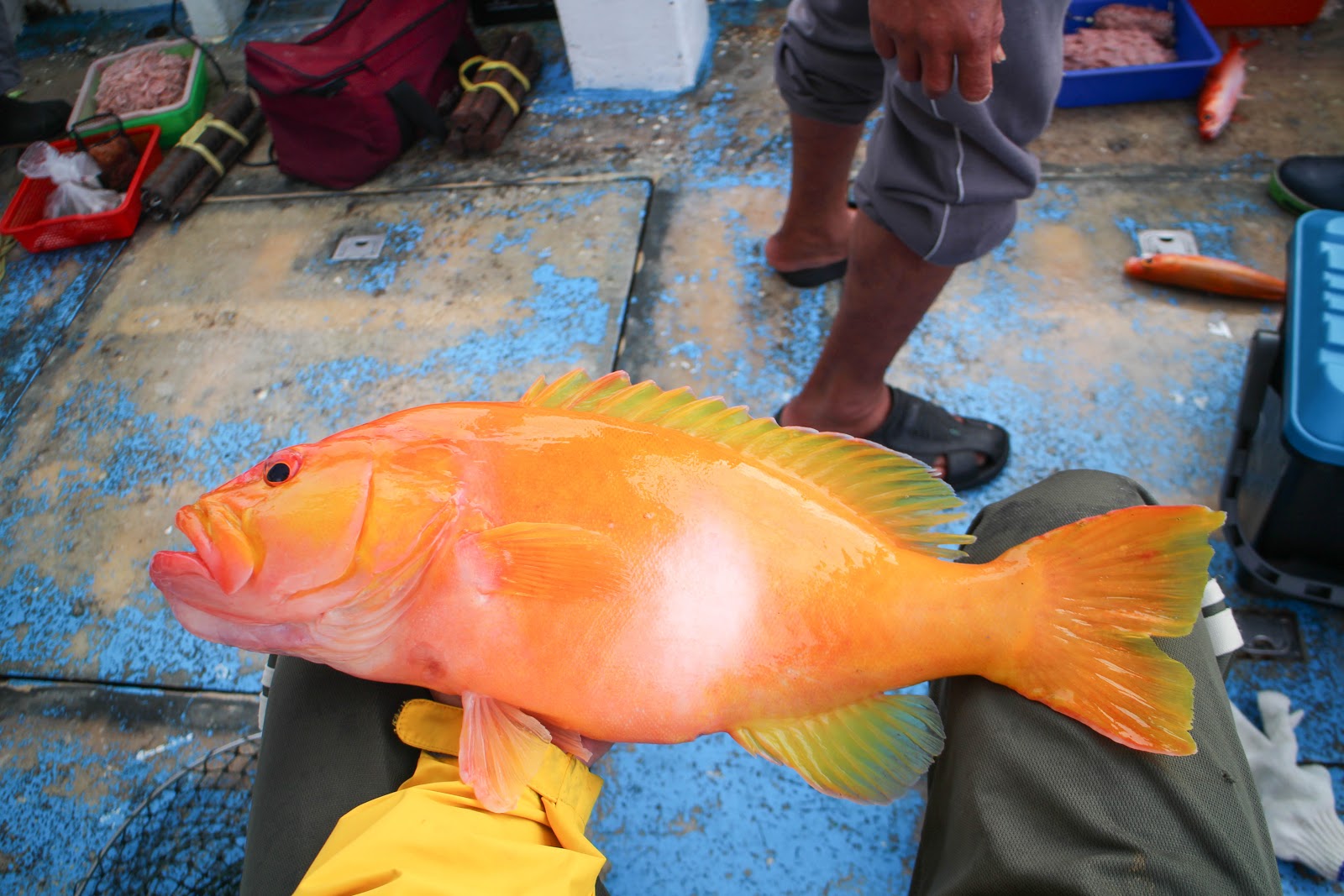 Lastly, the beautiful Golden Grouper (Saloptia powelli), a rariphotic species found primarily in the Central Pacific, has been moved into Plectropomus, a group known commonly as the coral groupers. The morphological differences separating these two—Saloptia had stiffer spines in its dorsal and anal fins and is missing enlarged canine teeth on the lower jaw—were considered relatively minor in comparison to their many similarities. But I’m not fully on board with this change. Unlike the previous examples we’ve looked at, these two are sister lineages (and fairly distant ones at that, based on the genetics), and they show some considerable ecological differences, with all of the Plectropomus found in shallow waters. A few of these species range deeper (up to 147 meters), but none are restricted to rariphotic depths and none have a coloration matching the bright gold of the Golden Grouper.

I’d have personally rather seen Saloptia left as is, and it’ll be interesting to see how the broader community of researchers reacts to this nomenclatural change. As we saw with the first attempt at reclassifying groupers, publishing a name change is not quite the same as having it accepted. But hopefully this time around, the majority of these are finally put into practice, as the evidence supporting them is really overwhelming at this point. There are a few more that I didn’t bother mentioning here, so, for those interested, be sure to check out the revision linked below.