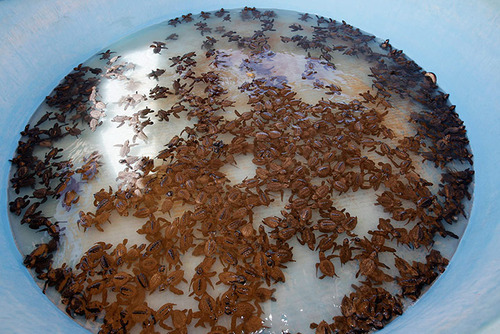 This is one of the vats used to hold and transport over 200 million baby olive ridley sea turtles to their release near Oaxaca, Mexico.  The program, instituted by the Mexican government, aims to restore the population of sea turtles that has been decimated by egg poachers over the years.  As everyone is aware, sea turtles nest on beaches and leave their eggs to hatch on their own, allowing poachers to simply dig up the eggs once the mother has left.  In addition, changes in the number of birds in the region has had a negative effect on the hatchlings as they are quickly consumed by birds as they make their way down the beach to the surf.  This is another great example of how a little know how and not too much money ($12m) can protect and even restore some of nature’s most wonderful creatures.