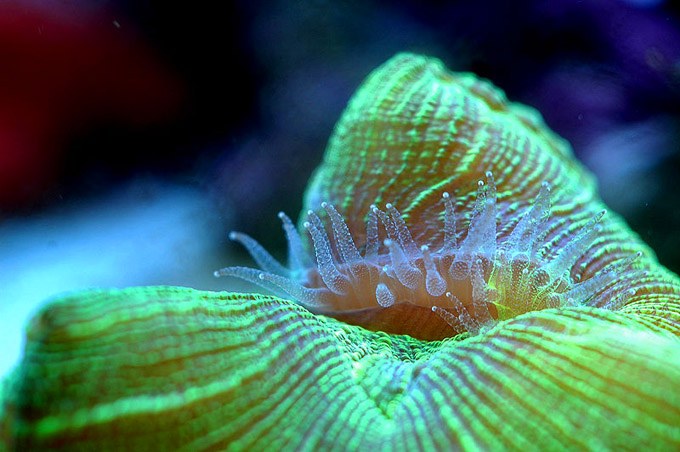 
Scientists have known for years that these symbiotic microorganisms serve up nitrogen to their coral hosts, but this new study sheds light on the dynamics of the process and reveals that the algae have the ability to store excess nitrogen, a capability that could help corals cope in their chronically low-nitrogen environment.

“It was a great surprise to find the nitrogen-rich crystals inside the algae,” says corresponding author Anders Meibom of the École Polytechnique Fédérale de Lausanne, Switzerland. “It all makes perfect sense now. The algae suck up the ammonium and nitrate like a sponge when the concentration of these molecules increases, then store this nitrogen as uric acid crystals for later use.”

Like all reef-forming corals, the species they studied, Pocillopora damicornis, is actually a symbiosis of two different organisms: the coral provides protection to a species of photosynthetic algae called dinoflagellates, which, in turn, provide sugars and nitrogen to the coral host. The symbiosis allows the coral to thrive in clear, tropical waters that are naturally nutrient-poor. In many places, however, coral reefs are suffering from an excess of nutrients – pollution from sewage and fertilizers that impacts the symbiotic relationship and the health of coral in unknown ways.

To better understand these exchanges of materials and to determine how an excess of nutrients might affect the balance, the researchers exposed pieces of coral to varying concentrations of isotopically-labeled nitrogen-rich compounds. Using the facilities at the Aquarium Tropicale Porte Dorée in Paris, France, the scientists applied a relatively new analytic technique called nano-scale secondary ion mass-spectrometry (NanoSIMS) to follow the path of the nitrogen. NanoSIMS enabled them to visualize and quantify the uptake, movement, and accumulation of this labeled nitrogen within the coral.

When supplied with nitrogen in the form of ammonium, nitrate or aspartic acid the dinoflagellates responded by rapidly storing the nitrogen as crystals of uric acid within its cells. But the dinoflagellates don’t hang onto the nitrogen for long. Starting at about six hours after exposure, the microbes begin translocating nitrogen-rich compounds to the coral host, where the nitrogen is used in specific cellular compartments all over the surface layers of the coral.

This storage and release process helps explain how these corals get through the ups and downs of nitrogen concentrations, says Meibom. “This gives the coral-algae symbiosis a very efficient way to deal with strong fluctuations in nitrogen availability,” writes Meibom. “When the nitrogen availability suddenly becomes high, the algae can take-up large amounts of nitrogen on a timescale of a few hours, store it into crystals inside the algae cells and then release this stored nitrogen for metabolic processes and growth when the nitrogen levels become normal again.”

To follow up on this work, Meibom says he and his colleagues are now studying how carbon-based nutrients are taken up and distributed in the same coral-algae symbiosis.