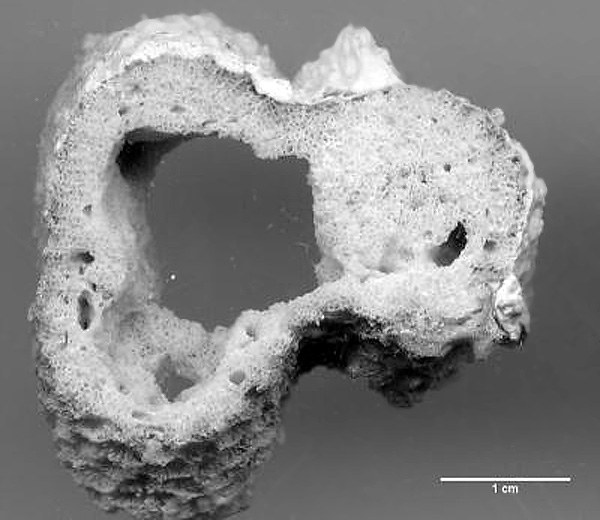 This is a coral sample that shows a large borehole created by a sponge. Sponges proliferate in reefs with high levels of pollution, according to a new study. Credit: M. Carreiro-Silva


The authors of the study have found that pollution and overfishing on reef systems have an ecological cascading effect — the proliferation of microbes, sponges, and worms — that further degrade corals, a discovery that underlines the complexity of reefs and possible solutions.

The study appears in the online edition of Marine Ecology Progress Series. The authors include M. Carreiro-Silva of the Center of IMAR of the University of Azores and Tim McClanahan of the Wildlife Conservation Society.

The paper examines how human activities can create unexpected complications in coral reef recovery and management. For instance, recent experimental studies by Carreiro-Silva and colleagues in Belize and Kenya demonstrated that a higher nutrient content in coral reefs associated with growing agriculture activity and urbanization increased the rate at which reefs eroded from microbes such as bacteria, fungi, and algae, as well as larger animals like sponges and worms. While the study cites previous work suggesting a faster erosion of reef calcium carbonate with high pollution levels, the experimental manipulations and use of reefs experiencing different levels of fishing and pollution strongly supports those previous conclusions.

An entirely new finding from this research is that worms are major eroders of reefs where fishing is heavy, while sponges play this same role in unfished reefs of the kind found in marine parks. This suggests that it is not only nutrients and pollution that are eroding the reef substratum. Marine consumers like fish and sea-urchins also appear to be influencing species that erode the reef substratum.

In heavily fished reefs, sea-urchins are the dominant grazers, and their grazing activity is so intense that only fast-growing early colonist species such as worms are able to grow inside the reef substratum. The lack of fish may also make these holes a safe haven for worms. In this scenario, worms then take over the role that sponges usually play.

“This change in the roles of worms and sponges shows how the affects of fishing can cascade down even into the hidden crevices of coral reefs,” said Dr. Carreiro-Silva of the Department of Oceanography and Fisheries at the University of the Azores in Portugal and the lead author of the study.

In areas impacted with high levels of runoff and drainage from land, such as some of the oldest marine parks in Kenya, researchers have found the highest levels of reef decay; in these instances, the increased pollution produces an abundance of sponges that live in and erode reef cavities.

Dr. Tim McClanahan, senior conservationist for the Wildlife Conservation Society and co-author of the study added: “This problem is outside of the usual control of park managers and shows the importance of maintaining clean waters if reefs are to grow and keep up with the rise in sea levels.”

The study authors are concerned about the cascading effects of pollution and overfishing on already stressed coral reef systems. Intensive erosion of carbonates has the potential to undermine reef growth and diminish reef structure over time, an increasing challenge as ocean temperatures and sea levels rise. The authors point out that reducing pollution, the influence of run-off, drainage of highlands and wetlands, and other sources of non-point pollution and land development in coastal areas are critical in conserving the ecological services provided by coral reefs.

Dr. Carreiro-Silva speculates that one unstudied but looming problem is the increased acidification of the ocean that will add to the growing intensity of impacts. Acidification created by increased emissions of carbon dioxide weakens coral skeletons and creates opportunities for species that like to live in hidden crevices and further dissolve the reef structure.

“Ultimately, the synergy between these different impacts may lead to the deterioration and eventual collapse of the reefs unless greater efforts are made to reduce the many sources of pollution and excessive use of coral reefs as fisheries,” she added.

via Wildlife Conservation Society (via EurekAlert!)