A recent study done by San Diego State University and published in the journal Nature Microbiology paints a bleak picture for reefs being blanketed by algae after a bleaching event. Dissolved organic compounds (DOC) are extremely prevalent on reefs, and it is microbes, along with lots of other reef inhabitants, that consume these DOC’s at a very high rate. Fleshy types of algae have actually been documented to release copious amounts of DOC’s at rates higher than any other reef inhabitant, and it is this interaction that the study paid close attention to. “Most of the energy in the ecosystem goes into the microbes,” said the study’s lead author, Andreas F. Haas, a biologist at SDSU. “It no longer supports the variety of reef organisms which make up a healthy system anymore.” The food web of a reef is millions of years old, and has evolved throughout the years to include every living organism in it, yet this new research tells us how the excess presence of algae can disrupt the entire metabolic process of the reef. 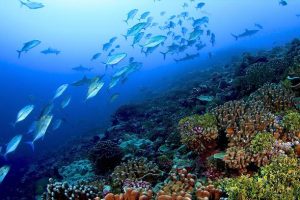 “Metagenomics shows us that microbes on algal-covered reefs are less efficient recyclers of carbon, short circuiting the transfer of organic matter to higher organisms like fish,” said co-author Craig Nelson of the Center for Microbial Oceanography at the University of Hawaii at Manoa.  Collecting more than 400 water samples from 60 coral reef sites across the Indian, Pacific and Atlantic oceans, Haas and her team found that reefs dominated by fleshy types of algae actually contain higher concentrations of harmful microbes, and through metagenomic sequencing they found the larger the microbial community, the higher the rate of harmful pathogen. “Algae always release more dissolved organic carbon than corals,” Haas adds, “but in the reefs with more algae you see less DOC.” As algae begins to take over just about every documented reef site in our natural world, “This well-documented study shows that human activities are affecting coral reefs in very subtle ways,” said David Garrison, program director in the National Science Foundation’s Division of Ocean Sciences, which funded the research. The relationship between these microbial community and coral still needs further research but this is a step in a new direction for the understanding of reef relationships. Read more here. (photo credit: Brian Zgliczynski)