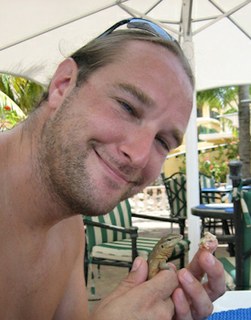 
For those of you unfamiliar with Mitch Carl, he currently holds a degree in Biology and is active with the SECORE (SExual COral REproduction,www.secore.org) project, which we blogged about in August.

A bit of back story on Mitch: he received his degree in Biology from the University of Nebraska at Omaha and upon completion was hired by Omaha’s Henry Doorly Zoo and Aquarium. Over the years, he worked his way up the ladder to eventually become the Curator of Aquatics, where he oversees the entire zoo’s aquatic collection and has recently completely renovated the zoo’s aquarium. As mentioned, he is now active with SECORE helping to better understand coral reproduction and to help save the endangered Acropora palmata of the Caribbean.

Remember, this is a “Richard Ross approved” speaker, so if you attended MACNA 2013 this year (which Rich MC’d, you know what kind of show Mitch has to top!  Get your tickets now while the $99 full-conference pass price is still in effect!