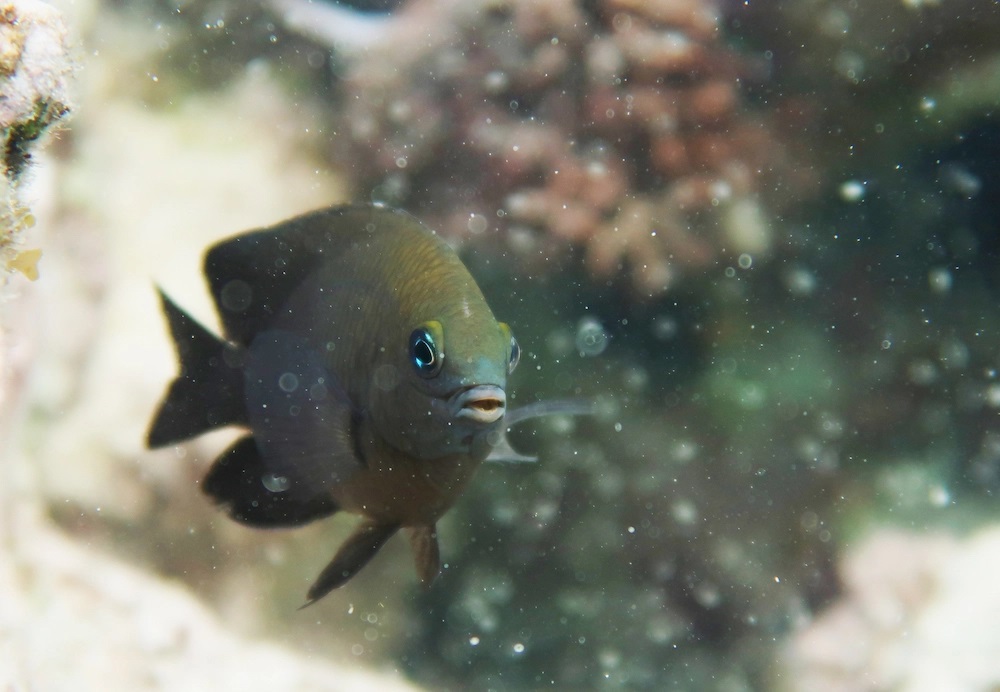 Back in 2013 research was published in two separate journals: Biology Letters and BMC Evolutionary Biology, that examined what would appear to be a type of farming practiced by several widely separated species of damselfish from Egypt to the Great Barrier Reef.  Unlike many species that consume plant material,  the damsels in the study tended to concentrate their grazing on one area, rather than roaming across the reef picking away at whatever they come across, a behavior typically seen in Tangs, for example.

The damsels’ grazing created a dense ‘turf’ of algae and one species of damsel was actively seen removing less desirable algal varieties from its ‘fields’.  Damsels were also seen vigorously defending their patches.  The research also discussed how the damsels’ crop would contain numerous other small organisms, from tiny crustaceans to bacteria, which greatly enhanced the nutritional value of what is known as ‘epithilic algal matrix’.

It gets a lot more interesting though!  In a paper published very recently, researchers looked at the behavior of Stagastes dienaceus, a Longfin Damsel from Belize.  They found that the damsel would actively chase away any creatures that came too close to its algal crop, but would ignore mysid shrimps.  The researchers suggest the mysids are fertilizing the algal crop and are therefore tolerated.

“The damselfish aggressively defend a patch of reef where they farm algae for food, against all but the mysid shrimps,” explained Rohan Brooker, the lead author, in a recent press release.

“Swarms of the mysid shrimp, who benefit from the protective refuge provided by damselfish, fertilize the algal farms with their waste, improving quality of the farmed algae, and in turn, the condition of the farmer, the damselfish.”

The team discusses whether this can be seen as a form of domestication, with the mysids using the fish to provide them with protection in return for their services.

Personally, it feels like a bit of a stretch to call this ‘domestication’, though the researchers mention various species of ants which appear to ‘farm’ aphids to consume their nutritious honeydew.  The ants will defend their ‘flocks’ from predators.

Perhaps this form of behavior is best considered an interesting form of mutualism with farming analogues?  If the mysids have somehow undergone deviation from their ‘wild’ relatives, then that would be closer perhaps.  Maybe more research will follow.

Journal reference: Domestication via the commensal pathway in a fish-invertebrate mutualism | Nature Communications