Inside Look at Neptune Trident

Neptune Systems has been teasing us for a while now and the hype over this release has been growing ever since its announcement at MACNA 2 years ago.
Check out our coverage of it when it was FIRST announced at NOLA MACNA in 2017.  They deservingly received an Afishionado /Reefs.com award for Best of Show at this MACNA.  Check out the video below to see my interview with Terence.

Fast forward to a few days ago on the launch day and as expected, Trident sold out instantly all over the country minutes after its 12am PST (3am EST!!!)  release and it’s been creating quite a splash in the reefing community. It’s so highly sought after, it can be bought for whopping $2-3000 on ebay and other various sale sites and platforms.  (yikes) 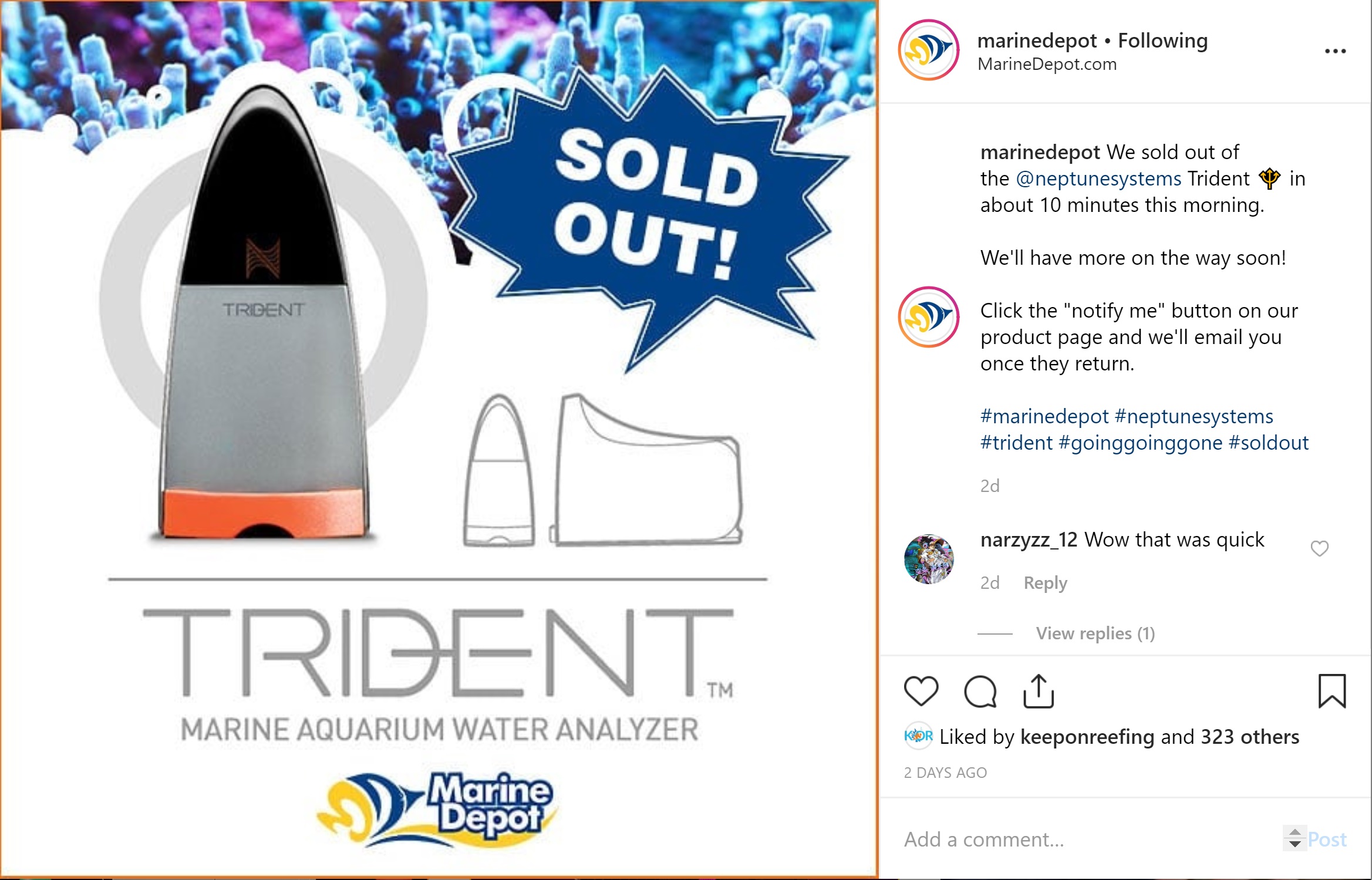 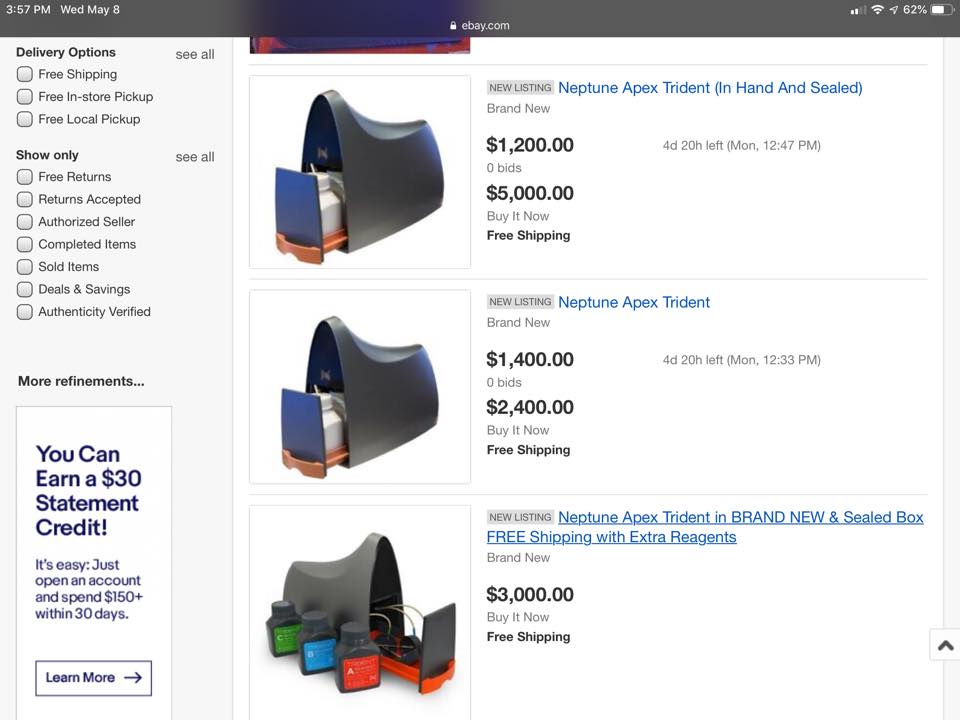 For those of you that has been living under a rock for last few years, Trident is neptune Systems’ long awaited, revolutionary automatic titration colorimeter tester that tests for calcium, alkalinity, and magnesium. It seamlessly integrates into the ever popular apex fusion, helping to dose necessary elements using their DOS system with Automatic Dosing Control (ADC) while giving us the usual notifications of warning if it ever gets too high or too low.  Why is this so revolutionary? Because it is first of its kind that tests the holy trinity of reef keeping (inside story here and I will get to that later) Ca, dKH, Mag in one machine with such precision while taking the human work/errors out of the equation to achieve even more consistency and greater success in our aquariums.

I have been following the creator of this unit, Jim Welsh’s work for many years now. In fact, when he unveiled and presented his first ever automated tester in our booth at MACNA 2016, it only tested dKH. It looked crude but it was functional and I told him that he had done something very special and this will revolutionize our industry. I still stand by this statement as countless innovations have come out since then to keep up with this machine. We had KH Guardian, KH Director, KH Lab, and Alkatronic to come to market, starting a wave of revolution in automated testing for our aquariums. But none of these products used the same tried and color titration method and of none of them tested anything more than just Alkalinity.  Jim’s product wasn’t ready for the consumer market yet. It had several big hurdles to overcome to make it into a commercially successful product. 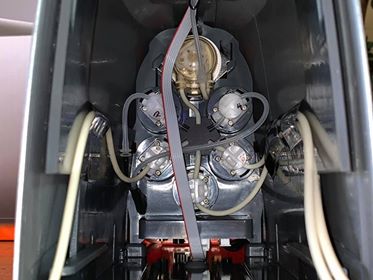 Although Jim pioneered the way for the alkalinity to be automatically tested, it was nowhere ready for the big time yet. Enter Curt Pansegrau and Terence Fugazzi of neptune Systems.

Terence stepped up at the podium at the APEXusers MACNA MeetUp in 2017 and explained it in detail.

Curt, the founder, president, and engineering brain of neptune Systems really did outstanding work achieving all of those goals. Looking inside the manifold in the unit (pic above) you can see some of the changes that they have made. With all the trial and error stories I’ve heard, the development of the Trident has been nothing short of amazing.  As much as I give credit to Jim for his innovation and genesis of this technology, I give Curt, and the rest of the neptune Systems engineering team, credit for making this vision into a reality.

Looking at Trident in numbers.

I have been fortunate enough to be part of first batch of NSI beta testers for this unit that provided feedback to work out all the kinks before it hit the market. Now that the NDA is lifted and I can share my experiences, besides having few calculation issue of calcium, (it was consistent but the number was off) I have not read or heard anything negative about the project from months of going through NSI forums. Utilizing this unit since February 9th, I can honestly say that it has been consistent, and a breeze to set up and use (I want to take a minute to acknowledge and say good job to Paul Jensen for creating such a great, dummy proof set up tutorial videos that you HAVE TO watch in order to setup the machine). My overall experience has been extremely pleasant and if you are already using apex controller system and can get yourself one, I would strongly recommend it. It was fascinating to see how the graph would tell me where my dKH was throughout the day, when it was being consumed, when it wasn’t being consumed, and how certain stress factors or changes in my aquarium effected my alkalinity and calcium consumptions. Being a visual person, I have always loved and appreciated how apex Fusion charts everything for me and this was no exception. I also liked that neptune Systems took their time to touch up on small details to show me how much reagents you have left as well as how much space you have left in your waste container.

Aftermath. Getting together withe creator of the unit after the release of the Trident.

Jim, Congrats on the successful launch of Trident!

Thank you! It really feels great to see it finally available.

What was the hardest thing you encountered in making this unit and how does it feel to see it so well received?

Achieving the necessary precision without having a pure water rinse available was probably the biggest challenge in developing the methods. I’m ridiculously pleased at how well it performed in the NSI testing, and early reviews by retail customers have been consistently enthusiastically positive. Happier reefing, everybody!

What was your reaction when neptune asked for holy trinity instead of just alkalinity?

I took it as an interesting challenge, and an obvious next step. I wasn’t surprised at the request at all. I had already toyed with the idea of doing Ca and Mg while developing the AMI, but deliberately put that research on the back burner during my race to get the AMI prototypes ready to bring to MACNA 2016.

I knew this was going to be special when I first laid my eyes on it at the reefs booth in MACNA 2016. ( I told Jim this as well in person)
Nearly had me off my chair when it was announced year later with the holy trinity. When I congratulated Curt on covering the holy trinity of reef keeping, he looked at me with a smile and told me that it was the project name before it was announced as trident.

Yes. The internal name was the HTD: Holy Trinity Device.

Nice. Old school name was an nice touch. (To me at least. It took me back to the long long long time ago to the days of Reef Central)

Any final words for us Jim?

It has been an immense pleasure working with Curt, Terence, and the neptune Systems team over the last two and a half years to bring Trident to you. It has been one of the most positive and functional teamwork experiences I’ve ever had. I only hope I have the good fortune to be able to work with them on another project in the future.

Huge thanks to Jim for the quick informal interview and I hope you guys enjoyed my take on the neptune Systems’ Trident.
Happy reefing!