The Chagos Archipelago is comprised of a small isolated group of coral atolls located to the south of the Maldives in the Indian Ocean and is home to the world’s largest protected marine reserve. A curious blend of species occurs here, with some belonging to the nearby Maldives, some from the Western Indian Ocean and some (e.g. Acanthurus nigricans) wafting over from Christmas Island to the east. There are also a small number of endemic or nearly endemic species, such as the endangered Chagos Brain Coral (Ctenella chagius) and the Chagos Clownfish (Amphiprion chagosensis), a species which has seemingly never been collected for aquarists. Remarkably little is known about this fish and few photographs exist, but there are some tantalizing clues suggesting that a second clownfish has been hiding in plain sight this whole time. 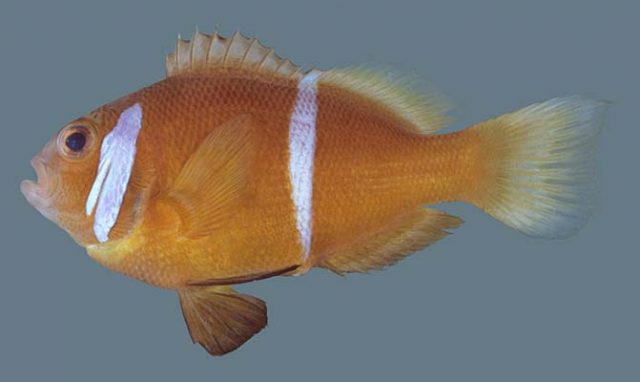 First, some background information. Amphiprion chagosensis, along with the Blackfoot Clownfish (A. nigripes) from the Maldives, are both likely to belong to the skunk clownfish group. Of course, neither of these possesses the white dorsal stripe that gives the group its skunk-like qualities, but there are two important facts that support this assertion: 1) Without them, there would be an obvious void left in the range of this group, which otherwise stretches from Africa to Melanesia. Widespread groups of coral reef fishes are seemingly never so completely and arbitrarily absent from a particular region in this manner. 2) There is a strong host preference for a single species of anemone, Heteractis magnifica, with few instances of them having been found in other hosts. (The only exception to this is A. sandaracinos, which has speciated sympatrically in the West Pacific by switching to Stichodactyla carpet anemones.

The importance of host anemone preference is critical to the point I’ll make about this fish. Only at Chagos do we find a purported member of this group regularly hosting in more than one species. Thus far, it has been documented from Heteractis magnifica, as we would expect, but also from the Bubbletip Anemone (Entacmaea quadricolor), the Long-tentacle Anemone (Condylactis doreensis) and Stichodactyla mertensii. And, in conjunction with this, specimens found outside their expected host tend to look different, having brighter colors and considerably wider stripes.

To understand what’s going on here, we need to detour a bit and discuss another widespread Indo-Pacific species group, which is currently recognized as a single taxon—Clark’s Clownfish (Amphiprion clarkii). As I’ve previously opined, there are probably more than a dozen distinct species or subspecies in need of recognition, each differing in its geography and in certain subtleties of the coloration. In the Indian Ocean, we find populations of this fish along the Arabian coastline, another at the Maldives, and a third in the Andaman Sea, but, oddly, this seemingly ubiquitous fish has never once been recorded at Chagos. Also germane to my point is that this group takes a very different ecological approach relative to most others in the genus, occupying a broader range of host species than any other clownfish. 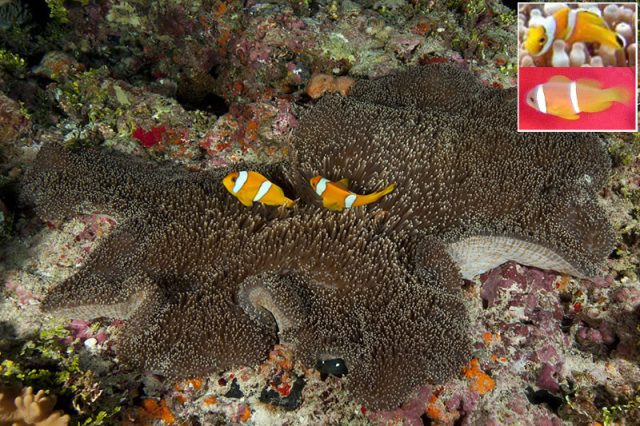 So let’s return back to Chagos and its enigmatic clownfish. The true Amphiprion chagosensis is a dingy fish (sometimes nearly black), with thin stripes (the first of which may be broken dorsally) and often with dark, nigripes-esque ventral fins. It is only known from Heteractis magnifica. But another species is also found here, which is nearly identical in appearance and which has been the source of much confusion. It can be recognized for having a vibrantly orange hue and far thicker stripes that always conjoin dorsally. Furthermore, it occupies at least four species of host anemone (and likely others) and juveniles have a white horizontal stripe along the margin of the dorsal fin rays (lacking in A. chagosensis). Given what we know about the genus, it appears clear that this is another unrecognized species related to Amphiprion clarkii that has mostly gone unnoticed. The only apparent record of it is a previous misidentification that suggested there was a population of the Red Sea endemic A. bicinctus found at Chagos. This, of course, makes little sense biogeographically, as no other Red Sea species has ever been shown to have such a bizarrely discontinuous distribution and, almost certainly, this is merely a case of mistaken identity—the two do look quite alike.

The similarities of the Chagos Clarki Clownfish and the true Chagos Skunk Clownfish are quite remarkable and hint at the possibility that the two have regularly hybridized to arrive upon their shared phenotypic similarities. Such a fate makes sense given the relative isolation and presumably low population levels these two have shared at Chagos. These are likely to be two of the rarest clownfishes in the world, and, undoubtedly, there is a fascinating evolutionary story yet waiting to be told. At the present time, the marinelife of Chagos is completely off limits to aquarists, but hopefully someday an exception can be made so that a captive breeding effort for the vibrantly colored Amphiprion cf clarki can be started. With its combination of beauty and rarity, this is surely one of the most desirable clownfishes in existence. 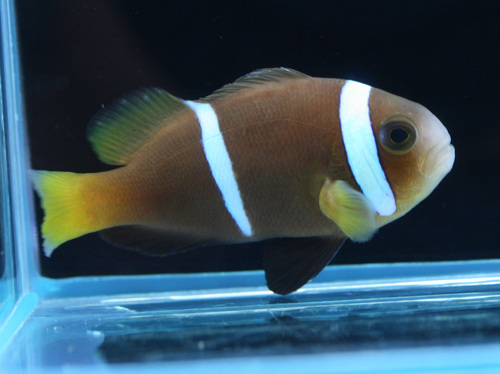 This unusual specimen appears to be the true Amphiprion chagosensis and was most likely a waif collected in the Maldives for the aquarium trade. Credit:B-box Marine