For the evolutionary biologist, there are certain species of reef fish which are inherently more fascinating and enigmatic than the rest—those which possess a mystery defying easy explanation. For me, near the top of this list is the Convict Tang Acanthurus triostegus (AKA the Black-barred Surgeonfish), a somewhat mundane fish which aquarists tend to overlook. The species is one of the most geographically widespread and abundant members of its genus, with populations stretching from South Africa to Costa Rica. Throughout its vast range, its most remarkable trait may very well be just how unremarkable it is. Specimens from Kenya and Japan and Tahiti and Mexico all look, more or less, identical; however, there is at least one small corner of the globe where this fish is undeniably different… Hawaii. 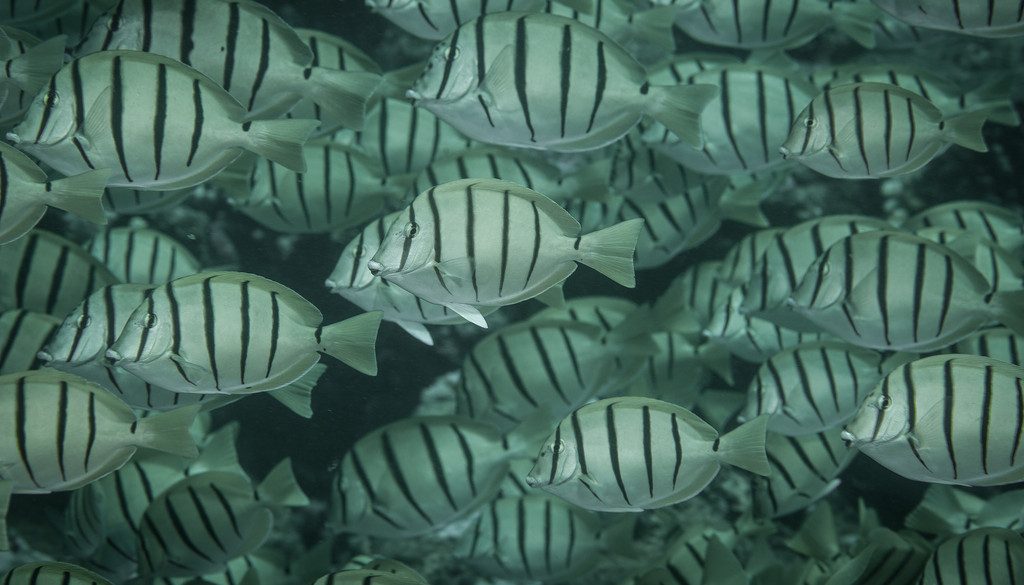 To understand the Convict Tang, we need to explore it from several different angles: genetics, morphology, and coloration. Fortunately, this species naturally occurs in vast schools, so it becomes rather easy to see the subtle phenotypic variations from a given region by simply staring at a few photos. The most visually apparent traits to look at are the black bars present on the top of the head, below the pectoral fin, and near the base of the caudal fin. Additional variation can be seen in the relative width of the black bars, but this appears to be related more to behavioral or environmental factors than to geography. 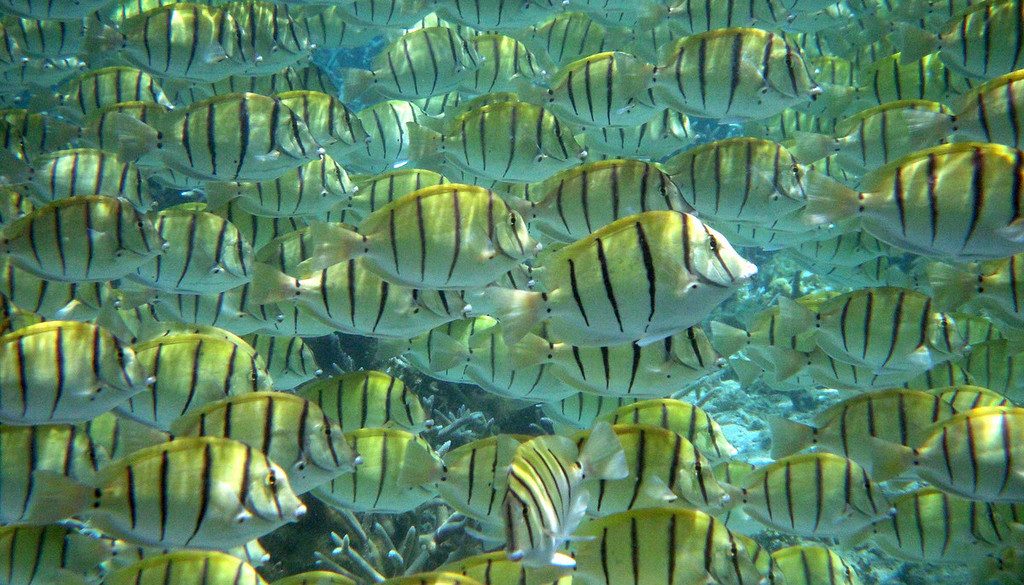 The distinctiveness of the Hawaiian population has been recognized since the 1870’s, when it was formally described as A. sandvicensis; the nomenclature is in reference to an older name for Hawaii—the Sandwich Islands. A quick glance reveals three diagnostic features that serve to separate this fish from others in the Indo-Pacific: 1) The top of the head is patterned with several faint blotches, rather than a medial stripe. 2) The pectoral fin has an posteriorly oblique black line beneath it, rather than a spot or short dash. 3) The broken bar on the caudal peduncle is formed only from a short dorsal marking. Elsewhere in the Indo-Pacific, this last feature is rather variable across and within regions, ranging from a mostly complete bar to those with only small dots present dorsally and ventrally. However, it’s only in Hawaii where the population is dominated by the dorsally marked variation of this bar, with only rare exceptions violating the rule here and elsewhere. 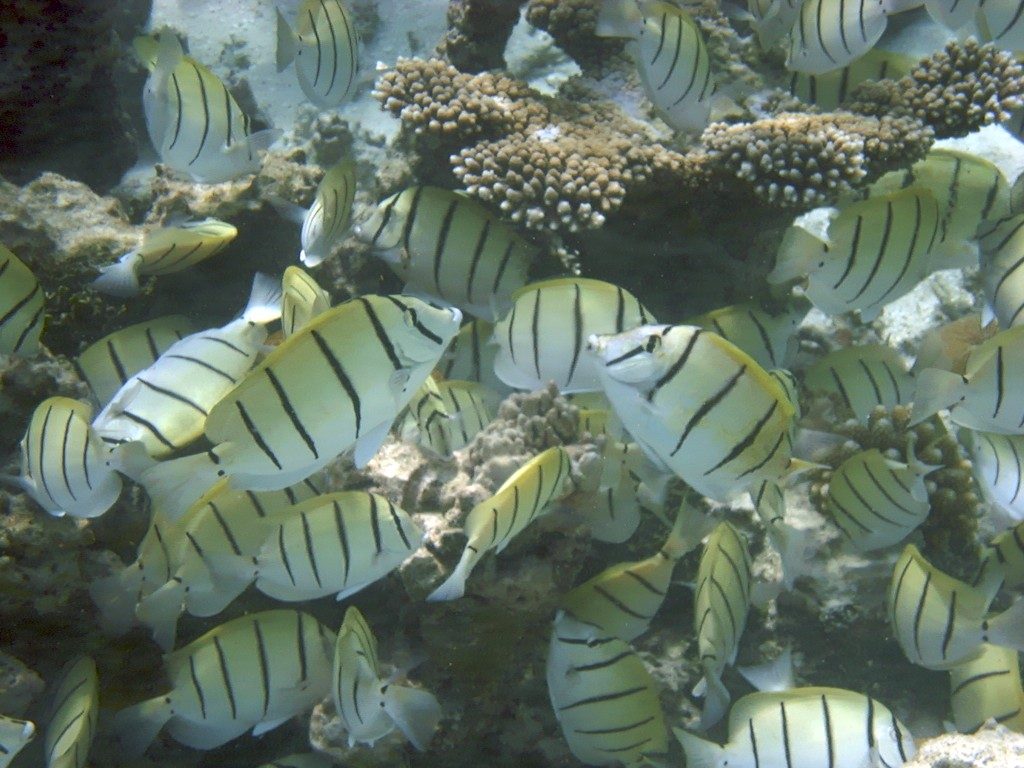 In addition to these external traits, there’s also some evidence of a morphological distinction. The data for this comes from John Randall’s revision of the genus published way back in 1956. In it, he gives detailed counts of the variation in dorsal and anal fin rays from across its geographic distribution. These data indicate that the Hawaiian population has a modally greater number of rays in both fins: 24 vs. 23 and 21 vs. 20, respectively. Of course, since these are modal (i.e. frequency) counts, there is naturally a great deal of overlap and exceptions can be expected. Whether there are other subtle differences remains to be seen, though Dr. Anthony Gill has suggested to me that there is some unpublished morphological data out there supporting regional diversity within A. triostegus. 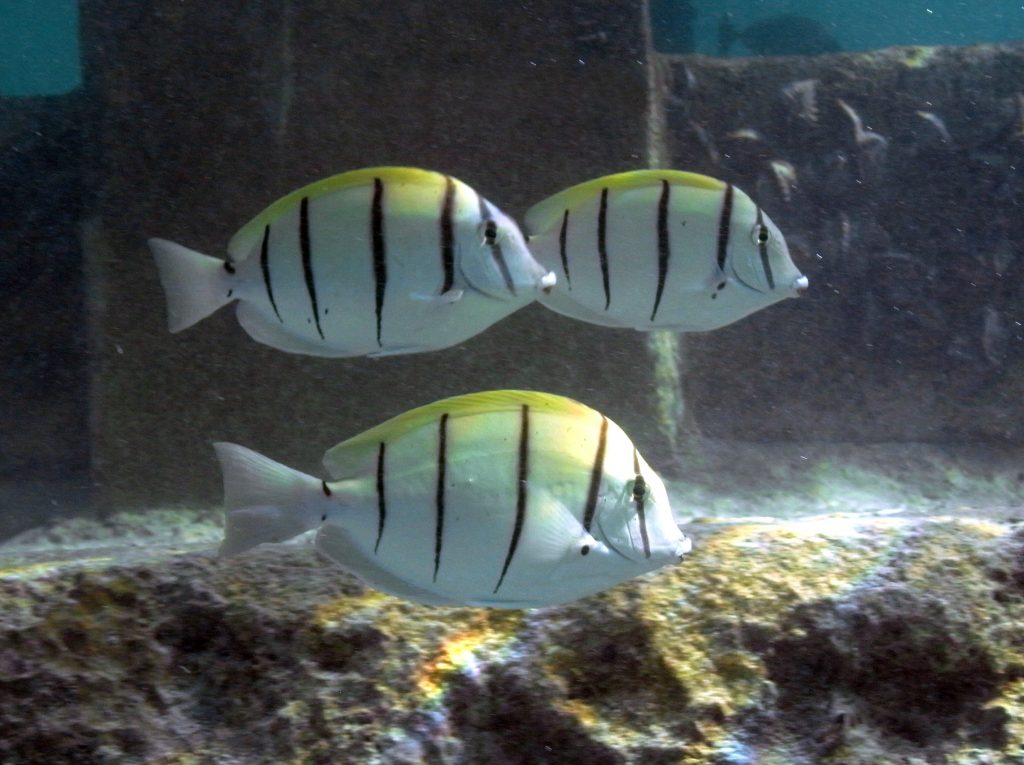 Acanthurus triostegus from Wakatobi, Sulawesi. The type locality for this species is an unnamed location in the “Indies” (i.e. Indonesia). Credit: Harry’s Dive Shop

Now, I would feel confident enough claiming A. sandvicensis as a distinct species based only on what we’ve discussed thus far, but the case becomes even stronger when we delve into the genetics of this beast. There is fortunately a wealth of available data out there which allows us to compare it across its range using a couple different genes: mitochondrial CO1 and ATPase. The latter gene shows there to be a deep genetic divide (~3%) separating specimens from Hawaii and nearby Johnston Atoll from all others in the Indo-Pacific (which, in turn, show little difference from one another). For the CO1 gene, the so-called “DNA Barcode” used widely in species-level determinations, we unfortunately don’t have any data from Hawaii, but we do have data from across the Indo-Pacific that again shows a single tightly clustered clade. This suggests, just as we saw in the morphology and color patterns, that there is little evidence for regional speciation in the Convict Tang outside of Hawaii. 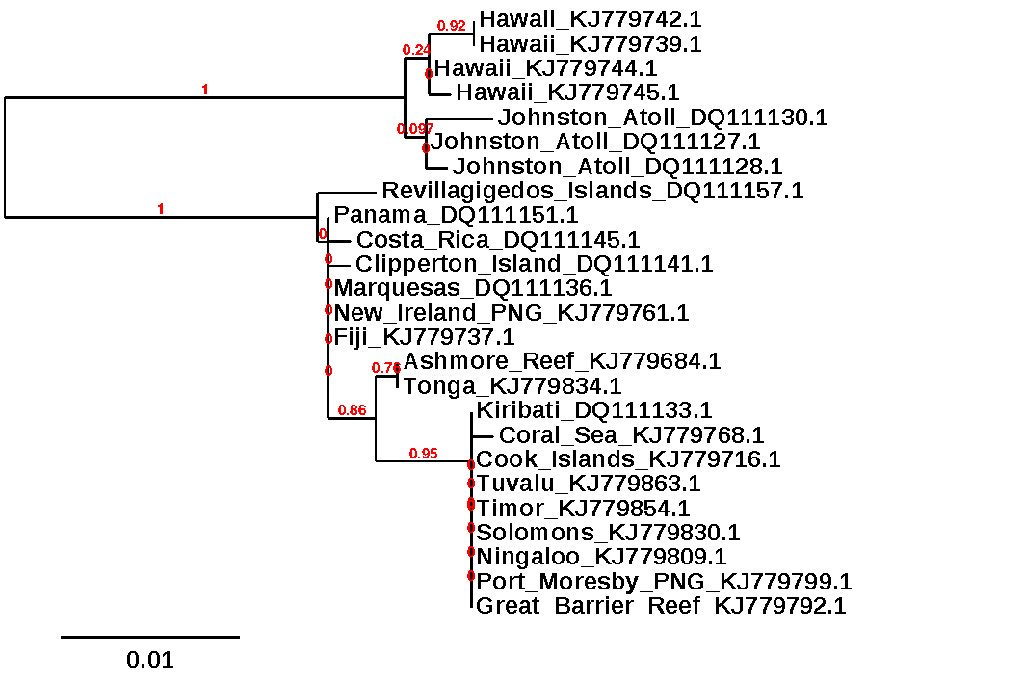 ML phylogeny of Convict Tangs using ATPase 6 & 8, data from GenBank. This is a simplified tree based on a larger data set.

Since John Randall’s revision of Acanthurus more than sixty years ago, the unique Hawaiian population has generally been regarded as a subspecies—a taxonomic designation that’s rarely applied to coral reef organisms. In truth, the difference between classifying something as a “subspecies” or as a full “species” is mostly semantics. Both terms indicate an evolutionary distinctiveness, but the subspecies label implies a close relationship and usually a geographic pattern to the organism’s speciation. But it is important that our classification be consistent across groups. For instance, is the Hawaiian Convict Tang (which, remember, differs notably in its genetics from the true A. triostegus) any less of a “species” than a fish like Pseudojuloides edwardi (which is nearly identical in its CO1 gene to the widespread P. severnsi)? Ultimately, there are real-world consequences when it comes to how the scientific community recognizes this sort of biodiversity, as it can directly impact conservation efforts. [For another example of this, see my earlier discussion of Northwestern Australia’s unique anemonefish.] 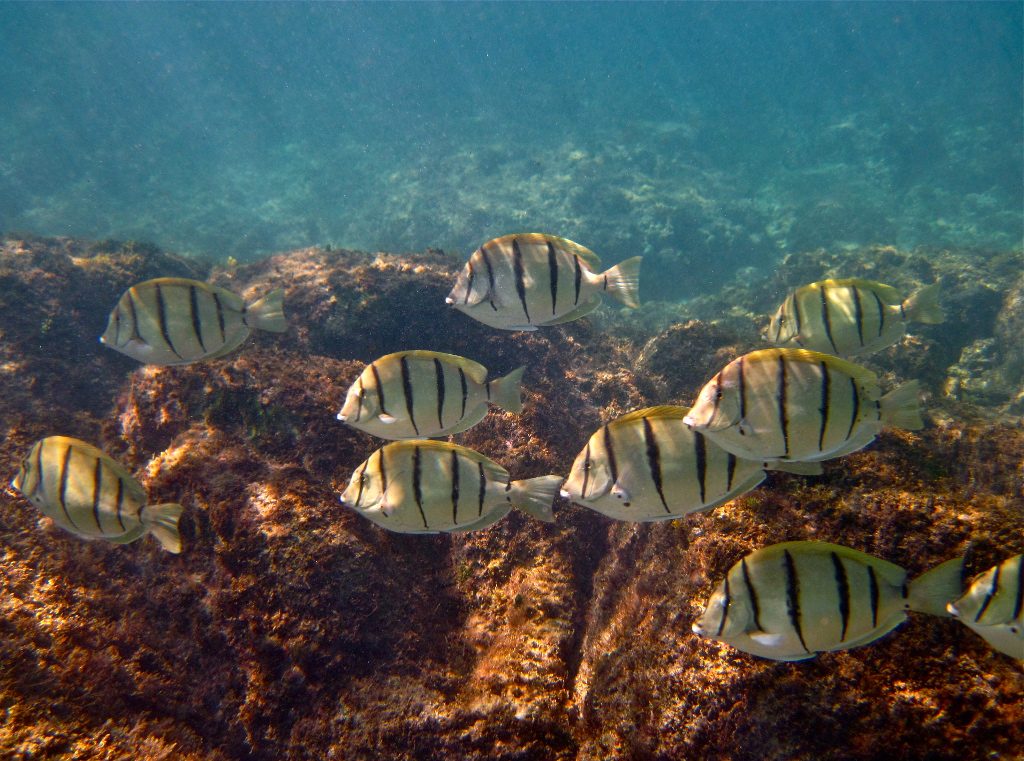 When we take into account the obvious visual differences in the Hawaiian Convict Tang, the apparent morphological distinctiveness, and the considerable genetic divide separating it from other Indo-Pacific populations, it becomes clear that this fish meets all the criteria for being recognized as a unique species. But the real question is why has this one region produced its own variation when many other equally isolated areas have seemingly failed to do so. Why is there no obvious split between the Indian and Pacific Ocean populations? How do the Convict Tangs in the Eastern Pacific remain so genetically cohesive with those further west? As I said at the beginning of this discussion, there are certain fishes that are undeniably more enigmatic in their origins than others, and the Hawaiian Convict Tang (A. sandvicensis, if you will) is most certainly one of them. 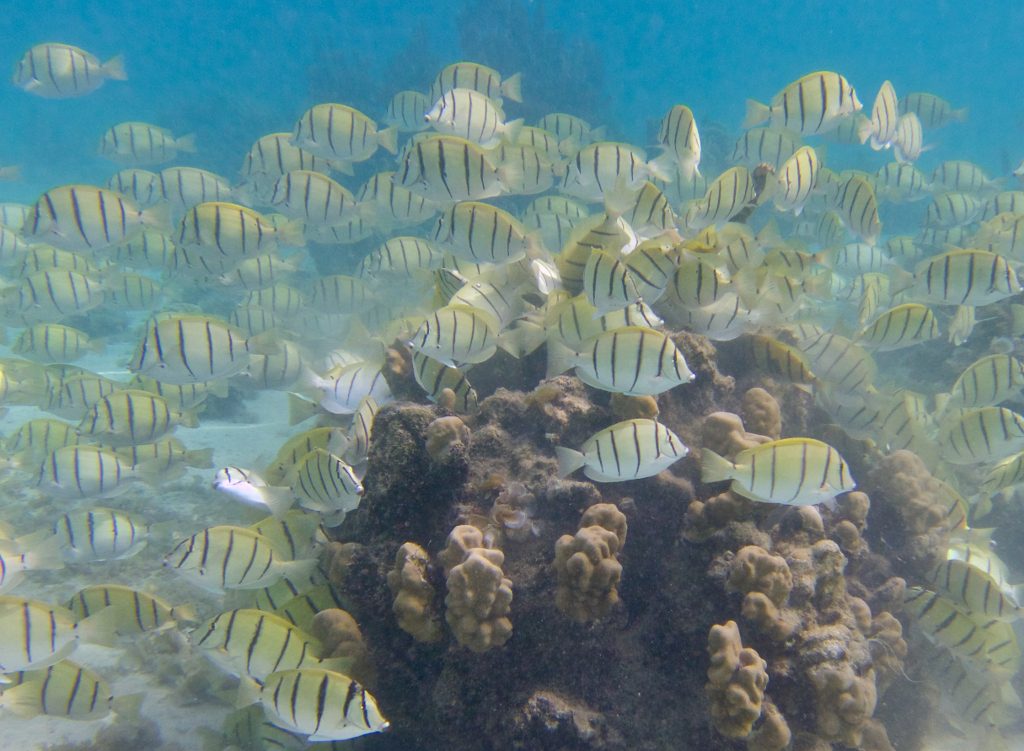