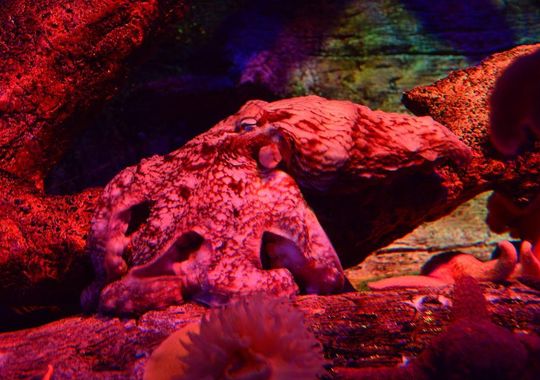 The Sea Life Michigan Aquarium is currently conducting on online poll to name its Enteroctopus dofleini, or Giant Pacific Octopus. The 14 month old female octopus arrived at the Aquarium last December and has remained unnamed. She weighs around 12 pounds, but is not yet fully grown. Giant Pacific Octopus, hence the name, can vary greatly in size, but get up to 30 pounds in weight, on average. The Guinness Book of World Records list the largest of the species at 300 pounds and a 33 ft arm span!! But more importantly, every Giant Pacific Octopus (GPO) should have an awesome name!! And now you can participate in what name this GPO shall have by going here and logging in your vote. The sky’s not the limit with regards to names, the aquarium has already narrowed it down to four choices, in which you can pick what you think is the best one. The contenders are:Ursula, Octesha, Lola and Morrigan. Quite an interesting assortment of names. Spoiler alert, at the time I voted, Lola was in the lead with 43% of all votes.This was just above Ursula, holding strong with 42%, Octesha had 8% and Morrigan had just 6% of the votes. The aquarium is also giving away four tickets to the aquarium through a Facebook contest, if you are close to Auburn Hills, Michigan. The voting will continue until this Friday, and then the polls will be closed. The name will be announced on Monday. I’m personally rooting for Lola myself. MORE