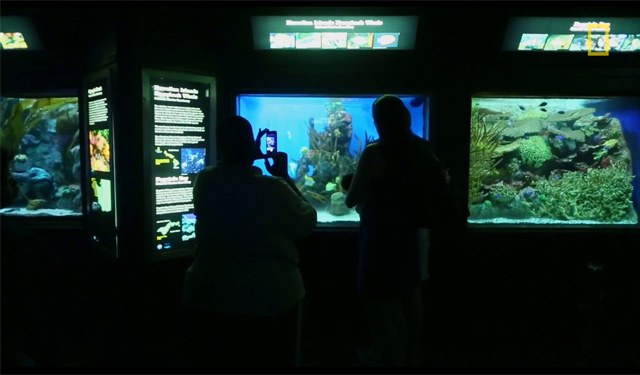 DC National Aquarium exhibits such as these coral reef biotopes now only exists in memories.


The DC National Aquarium is the first AZA accredited aquarium to close (through no fault of its own).  It’s a very small aquarium by modern standards; its exhibits housed only 2,500 animals compared to the 35,000 at Monterey Bay Aquarium.  Still, the closing of any public aquarium is no small feat as National Geographic’s video captures.  Imagine the work (and sadness) when you tear down your home aquarium, then magnify that by 1000%.

The aquarium staff had to account for every one of the aquariums inhabitants, from netting a giant Pacific octopus to wrangling alligators to diving into tanks for tiny gobies and starfish.  And then there is the difficult task of finding homes for all the animals.  Of the 2,500 specimens, about 1,700 was accepted by DC’s sister aquarium, the National Aquarium at Baltimore.  Some animals like the juvenile American alligators were returned to their native waters.  But some animals are still in need of a permanent home.

Advanced Aquarist wishes the entire aquarium staff the best of luck as they will soon move on to new ventures.  For now, much of the staff remains to oversee the care of the remaining animals in need of homes.  It’s this dedication that make public aquariums special places.  Says the Director of Operations, Dave Lin: “Reversing some of the blood, sweat, and tears we’ve put into this facility is a little on the sad side. […] We’re still trying to do everything with as much pride as we can.  I know the feeling is shared throughout all the staff that if somebody’s going to shut this place down, we want it to be us. We don’t want to trust somebody else to do it.”

The aquarium’s board members may still consider a return to Washington DC, but (re)starting any public aquarium requires substantial funding – something that may prove difficult in today’s economic climate.