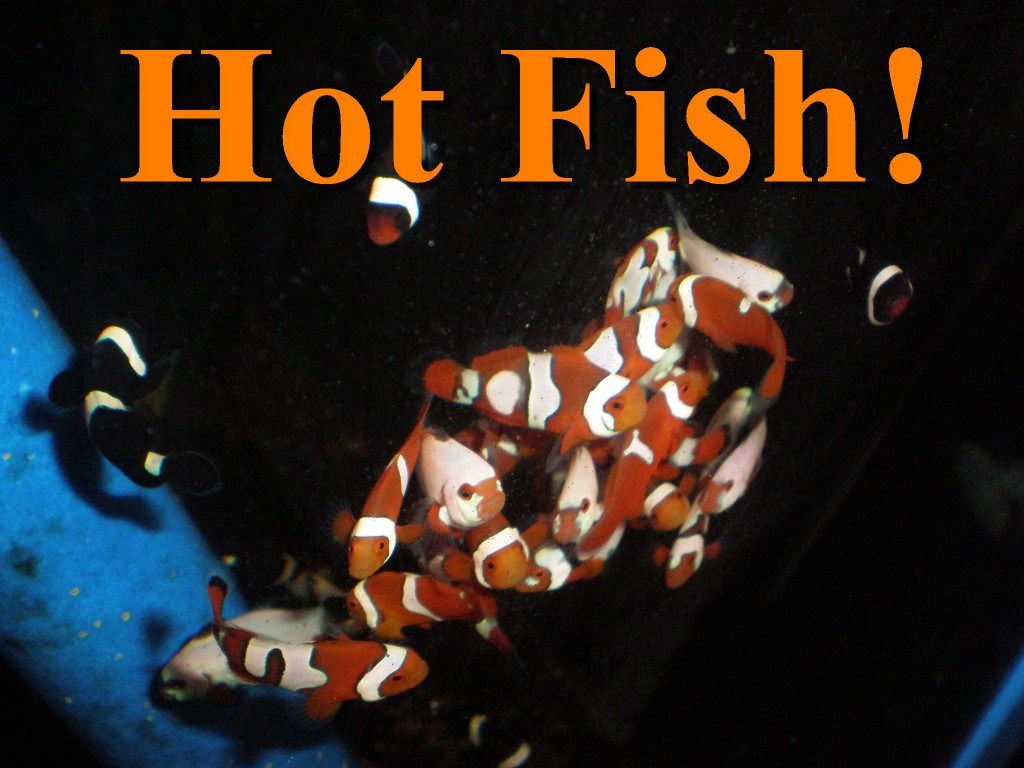 As many of you know, I breed several species of marine fishes. It is a worthwhile endeavour that I truly love.  This past week I was faced with a problem that nearly destroyed five months of hard work. I’m sharing this in hopes that others can learn from my experience.

My grow-out system is comprised of four 20 gallon tanks plumbed into a 55 gallon sump. The sump consists of a filter sock over a container of bio-balls, a protein skimmer, heater, and a section of live rock. Fairly simple overall, but effective for my needs. 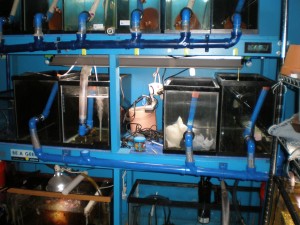 My grow out system is shown here on the middle level, sump is on the bottom right. This was before the system was running.

Last week we had two very hot days, around 90°F. The nights were warm too. I have a feeling the high ambient temperatures compounded the problem that I will describe.

I feed my broodstock and juveniles four times per day, every four hours. It was during the midnight feeding when I noticed some odd behavior in my juveniles. At the same time I touched the water and to my horror the water was hot! At that point I took a closer look at the fish and I could see that some of them were dead, others were showing clear signs of distress.

I immediately unplugged and removed the heater. It was hot, indicating that it was on even though it was set at 82°F. I then checked the thermometer… it read over 90°F! The combination of a few hot days and a faulty heater had caused an extreme rise in water temp. What to do next was my main concern.

The first thing I did was to add a gallon of cold fresh water that had been treated with ClorAmX to top things off. I then made up ten gallons of cold saltwater. Fish-only systems are more forgiving when it comes to water quality so I don’t use RO/DI water. Besides, I was in a hurry!

I then drained five gallons out of each of the two grow-out tanks that were of highest concern and replaced it with the cold saltwater. By “highest concern” I mean the tank with the small A. ocellaris juveniles I had transfered the week before and the tank with a large batch of Picassos.

I also turned all lights off, removed the tank covers, placed a large floor fan near the sump, two smaller fans blowing across the tops of the tanks, and one in the window to draw in cooler air from the outside.

Still not satisfied that that would do the trick, I placed bags of ice into each tank and into the return section of the sump. I know that temperature shouldn’t be dropped too quickly but at this point I really felt that I needed to cool things as quickly as possible. Now all I could do was wait and hope for the best.

While I was nervously waiting for things to cool down I was able to chat with fellow breeder, David Durr, on Facebook who lives on the West coast and was still awake. I explained the situation and he agreed that I had done the right things. Thank goodness for the internet and chat features! It sure helps to chat with someone when things like this happen.

By 3am the temp had been lowered to around 85°F so I figured I might as well get some sleep. Needless to say I didn’t sleep well but I did get some rest.

When I woke the next morning I went straight to the fishroom, expecting the worst, but hoping for the best. To my delight I still had fish swimming around. Temperature was back to normal so I turned the lights on to assess the casualties. The fish that were most affected were the smallest A. ocellaris juveniles. I lost about a dozen of them. The rest of the larger juveniles all seemed fine and I found no casualties. I did have 3 damselfish in the sump that didn’t make it, I assume that the temperature was probably the hottest in that area.

I should note that my broodstock system is the same configuration as the grow out system but plumbed separately, not connected. I did a lot of research when I planned my systems and chose to plumb them separately for this exact reason. If both systems had been plumbed together I might have lost some of my broodstock as well.

So, what did I learn from this experience?

I’m still monitoring all of the juveniles to make sure that there are no long term effects from the stress. They seem fine several days later so I’m hopeful that they will not be affected by this event. As a preventative measure I’ve increased the amount of fresh garlic in their diet.

I hate to lose any fish. The loss of life bothers me more than the loss of money so only losing a dozen out of about 300 wasn’t that bad in the big picture, it could have been a lot worse! That being said, losing the batch of Picassos, that includes over a dozen Platinums, would have been a major loss both in money and time invested in them.

To end on a happy note, here are some photos that I just took. 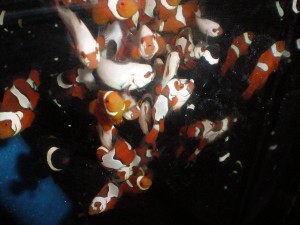 Not the best photo but these are the Picasso and Darwin offspring today. 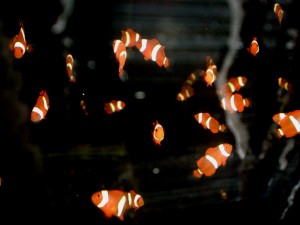