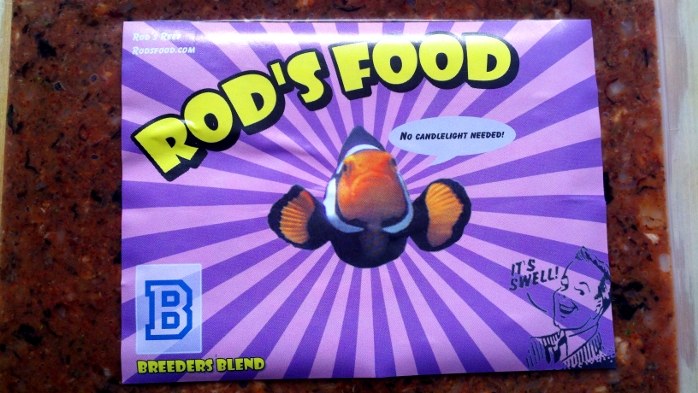 
One of the most important things you can do for your mated pair of fish – apart from setting up the proper environment and water quality to induce spawning – is the proper food. Breeders Blend is the next product in Rod’s Food product line, and it takes aim at breeders needing a different blend to help condition their spawning broodstock.

After learning about the new food blend being offered by Rod on the Marine Breeding Initiative forum, I took some time to talk to Rod himself about the new blend as I wanted to learn more about what this new food would mean to marine breeders.

Rod Bueher, owner of Rod’s Food, has been breeding fish for years. He was one of the early pioneers in breeding Banggai Cardinalfish (Pterapogon kauderni) in the mid-90’s, and this is when he started making his own frozen food blend.  The Original Blend traces its roots to these early days of fish breeding and was the first product offered by Rod.

“Breeders Blend started as a joke. Every pair of fish I have ever owned has spawned, and all within a few short weeks of me acquiring them. Once another breeder was here and knowing that there were four pair here that weren’t here a month ago, and seeing that they were all attending to their clutch of eggs, asked ‘What’s your secret?!?!’ I grinned and said ‘Its all in the food.’ His reply was ‘You should market a breeders blend!’ My friend that does a lot of my graphics was also [listening to] the conversation. A week later, my friend handed me a jump drive with some new web design and he threw a Breeders Blend tag in [with the work]. We laughed. I tossed the drive in the drawer. Being a procrastinator, when the time came to publish a new site, I was in a rush, and handed the artwork to the back end web people, forgetting that the Breeders Blend [graphic] was there. Soon the questions were flying in.”

“We decided to market the Breeders Blend as the ‘the ultimate conditioning diet’ and that is what we tried to create.”

Rod states:  “[Breeders Blend is] not intended as a sole diet, but just as a conditioning diet for spawning fish. My recommendations will be to start using the Breeders Blend around the time the current batch of eggs is hatching (give or take a day or two depending on spawning frequency) and discontinuing when the next spawn occurs (or within about a week). Although I doubt [it will be] necessary, we will have warnings [on the packaging that the Blend is] to be used only as a conditioner to avoid any liver issues cause by high fat content.”

New Breeders Blend should be available at the end of May, 2011.  Use the handy store locator on Rod’s Food website to find a store near you.

New Foods on the Horizon

Rod is also planning to release new foods in his product line, starting with a frozen larval / juvenile food reportedly similar to Coral Blend.  There is also plans for powdered / pelletized diets.

Incidentally, if you are interested in breeding fish, I’d highly recommend you check out both the Marine Breeding Initiative forum as well as Matthew Wittenrich’s book The Complete Illustrated Breeder’s Guide to Marine Aquarium Fishes (aff), which we reviewed May 2010.