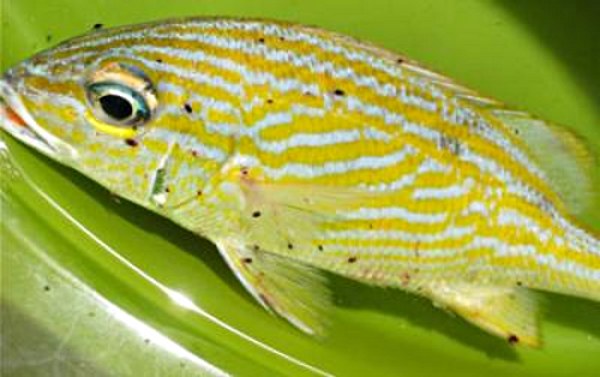 This is a Caribbean fish known as the French grunt that is infested with gnathiids. Photo by Elizabeth Brill.


President Barack Obama has one. Comedian Stephen Colbert has one. Elvis Presley has one. Even computer software magnate Bill Gates has one. And now, Bob Marley–the late popular Jamaican singer and guitarist–also has one. So what is it that each of these luminaries have? The answer: they each have a biological species that has been named after them.

All of the life stages of Gnathia marleyi are described by Sikkel and his research team in the June 6th issue of Zootaxia. This research was partly funded by the National Science Foundation (NSF).

Sikkel said, “I named this species, which is truly a natural wonder, after Marley because of my respect and admiration for Marley’s music. Plus, this species is as uniquely Caribbean as was Marley.

Gnathia marleyi is a new species within the gnathiid family, and the first new species to be described in the Caribbean in more than two decades.

By concealing themselves within coral rubble, sea sponge or algae, juvenile Gnathia marleyi are able to launch surprise attacks on fish and then infest them. Sikkel explained that adult gnathiids do not feed at all. “We believe that adults subsist for two to three weeks on the last feedings they had as juveniles and then die, hopefully after they have reproduced.”

“Gnathiids, in general, are the most common external parasites found on coral reefs and are ecologically similar to land-based blood-sucking ticks or disease-carrying mosquitoes,” Sikkel said. “Gnathiids live on the ocean floor from pole to pole, and from shallow reefs to the abyss–and everywhere between. They are also the most important food item for cleaner fishes and thus key to understanding marine cleaning symbioses.”

Sikkel explained that his research group is interested in the combined ecological effects of fishing pressure and reef degradation. “We suspect that coral degradation leads to more available habitat for external parasites to ‘launch attacks’ on host fishes,” he said. “And as the number of potential host fish decreases, each remaining host will become more heavily parasitized.”

“Our current work is focused on how changes in coral reef environments, such as coral bleaching, influences interactions between hosts and parasites,” said Sikkel. “We’re including in our studies any effects on cleaning organisms that remove parasites from hosts.”

About 80 percent of all organisms found on coral reefs are parasites. The gnathiid isopods are among the most ecologically important of them, according to biologists, because many diseases afflicting desirable fish are either caused by, or are transmitted by gnathiids. In addition, the immune system of fish also depends on the overall health of coral reefs, which are known as the “rainforests of the sea” because of their vast biodiversity.

At the end of the day, it comes down to simple oceanic economics: the more parasites there are, the fewer fish there are–at least until the parasites run out of hosts to infect. And fewer fish in the sea can cause significant losses to the populations that depend on them.

Studying the effects of changes in sea-bottom communities associated with coral and sponge diseases and their interactions among other species will advance knowledge of blood-borne pathogens. Sikkel suspects that Gnathia marleyi may be a vector in transmission of these diseases.

Sikkel says his team’s current funding through NSF’s Ecology and Evolution of Infectious Diseases (EEID) initiative and Biological Oceanography is enabling the team to study precisely which species of Caribbean reef fish harbor these blood parasites. “We are determining the role of Gnathia marleyi, which will help us understand the impacts of changes in coral reef habitat on the transmission of a fish disease called haemogregarines–a type of fish malaria that may weaken their immune systems through a reduction in certain blood cells.”

“Disease ecology is a rapidly maturing field in marine science,” said Michael Lesser, a program director in NSF’s Biological Oceanography Program. “To advance this field, scientists must identify which organisms are the main players in disease transmission in oceans.”

Lesser continued: “With so much marine diversity yet to be described, parasitic species don’t always get the attention they deserve. But Sikkell and his team have taken an important step by helping to analyze the ecological effects of a parasite on Caribbean coral reef fish populations by describing this previously unknown species.”

Sikkel initially discovered Gnathia marleyi about 10 years ago in the U.S. Virgin Islands where it is relatively common–so common, in fact, that Sikkel had assumed for years that the species had previously been described. Nevertheless, compelled by a hunch, Sikkel ultimately sent a specimen of the species to Nico J. Smit of North-West University in South Africa, a member of Sikkel’s research team, who confirmed that the species had, in fact, previously been overlooked by taxonomists. With the help of Whitney Sears, one of Sikkel’s students, the research team raised the isopod from its juvenile stage through adulthood, a laborious task that was necessary because most taxonomy descriptions of gnathiids are based on adult males, which usually differ in appearance and other ways from juvenile gnathiids.

Specimens of Gnathia marleyi will be housed indefinitely at the American Museum of Natural History in New York City. “We are currently discussing with AMNH the possibility of creating an exhibit featuring this species that could be viewed by the public,” said Sikkel.

Sikkel’s research team includes Charon Farquharson of the University of Johannesburg in South Africa and Smit.

And by the way, if you are wondering, President Obama has a lichen named after him; Colbert has a beetle; Gates has a flower fly, and Elvis has a wasp.