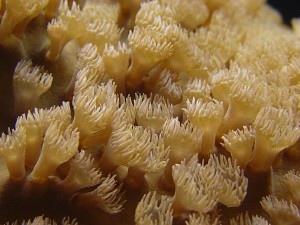 Global warming and ocean acidification are two aspects that are quickly reshaping what we know as the coral reefs, and with these factors moving in quickly, scientists are wondering where the optimum coral areas of the oceans will be in the future. A new study published recently in Global Change Biology by Dr Elena Couce, Professor Andy Ridgwell and Dr Erica Hendy uses computer models to predict where the coral reefs may be in the future with regards to these two stressors.

Dr Couce said: “Just as we have to take into account many factors when deciding where to live and juggle the trade-offs such as proximity to a city centre or the desire for a garden, whether a coral reef can establish or not depends on conflicting stressors. Global warming is stronger at the equator and drives corals away into higher latitudes, whereas acidification is stronger close to the poles and pushes coral habitat towards the equator.”

Dr Hendy said: “We also found that some areas where conditions are currently borderline for corals, such as the eastern Pacific Ocean, could remain as they are or even become more suitable. This was unexpected and has important implications for coral management, as it suggests that these areas are not necessarily a ‘lost cause’.”

Coral reefs are among the most sensitive and bio-diverse of ecosystems which will make them a key factor in observing changes in the health of the oceans during the future.

Dr Couce continued: “By 2070 we predict that the Western Pacific, including the area known as the ‘Coral Triangle’, the bridge between Asia and Australia, will become much less suitable for corals. This is concerning because the Coral Triangle is a biodiversity hotspot containing over 70 per cent of known coral species. Conditions in the Great Barrier Reef in Australia will also get worse, although less rapidly, since it is farther away from the equator.”

Professor Ridgwell added: “Suitability for corals gets better at the limits of the current coral reef distribution. But a possible move into higher latitudes will also be difficult. Range expansion is constrained by availability of shallow water areas with adequate light penetration for coral larvae to settle and form new reefs.” Eurekalert