There are somewhere around 33,000 species of fish known to science, but our system for classifying this immense biodiversity is in a constant state of flux. For the non-taxonomists out there, it can be a challenge to keep up with all these changes, and, making matters even worse, no two sources ever seem to agree on all the details. Thankfully, an authoritative new study has recently been published (Betancur et al. 2017) which helps to clarify many of these issues. So, sit down and relax as we explore the shifting landscape of fish phylogenetics. 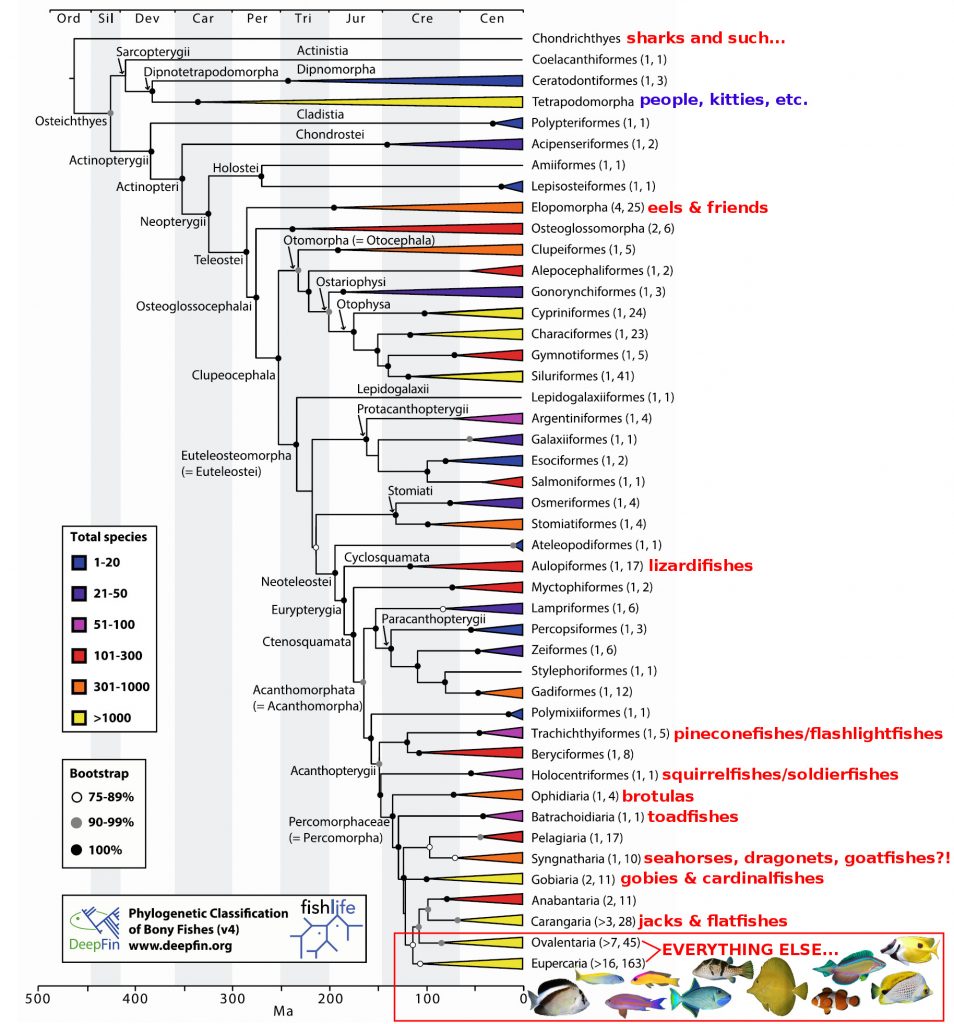 Now, before beginning this discussion, it must be emphasized that it is beyond the scope of this humble blog post to summarize all the nitty gritty entailed in covering such a complex topic as fish evolution. So, instead, I shall endeavor to highlight only those groups of most direct concern to marine aquarists. As we’ll soon see, the vast majority of fish families found in the aquarium trade come from a relatively small branch of the larger fish tree of life… but it just so happens that this small branch is exceedingly diverse. This is actually a fairly common theme when it comes to evolution in general. Nature tends to experiment early on with a wide range of bodyplans until one proves to be particularly innovative and successful (e.g. perciform fishes, holometabolous insects, eutherian mammals, etc.), after which it quickly flowers into a dominant lineage.

With fish, most of the earliest clades to appear have a relatively limited presence in coral reef ecosystems. The big exception here is, of course, the cartilaginous sharks and rays, who seemed to have stumbled upon a highly successful way of life quite early on in the history of life on earth. But once we move over to the ray-finned fishes (Superclass Actinopterygii), the earliest branches are filled with species-poor groups—bichirs, gars, sturgeons, arowanas, etc. The lone exception here is the Elopomorpha, wherein we find the true eels of the Order Anguilliformes (e.g. Moray Eels, Snake Eels, Garden Eels, and many others not associated with reefs). These all have the gossamer leptocephalus larva, as do their other elopomorph relatives.

Moving up the tree, we soon find ourselves bypassing some vast swaths of fish biodiversity. Groups familiar to freshwater aquarists, like catfishes, barbs and tetras, all form one huge lineage known as Ostariophysa, but, aside from a handful of reef-associated catfishes, most of these have nothing to do with marine ecosystems. And we’ll zip on by past salmon and pike and cod and dories (among other obscure clades), stopping only briefly to say hello to the lizardfishes of the Order Aulopiformes. Lizardfishes tend not to be appreciated all that much by aquarists, but they’re fairly common members of the reef fish community and are clearly quite unique when seen from an evolutionary perspective.

One of the more familiar of the higher-level fish clades is Acanthopterygii, which includes most of the fishes with spines in their fins—the name literally means “spined fin”. Just about every reef fish that isn’t a shark, ray, eel or lizardfish is going to fall into this gigantic group, which would seem to imply that having spined finnage is a pretty fruitful way of life. But even here we see a wide range in their relative abundance. Many of the earliest lineages to diverge are dominated by deepwater species with comparably few members in shallow tropical habitats. Pineconfishes and flashlightfishes represent the Order Trachyicthyiformes… squirrelfishes and soldierfishes are the familiar examples of the Order Holocentriformes… brotulas are secretive reef fishes from the Order Ophidiiformes, a group which abounds in the briny deep… and then there’s the humble toadfish (Batrachoidiformes).

These latter two groups, along with all the other remaining reef fishes, fall under the umbrella of the Percomorphacea (formerly known as the Percomorpha, and not to be confused with the Eupercaria (= Percomorpharia), the Perciformes, or the Percoidei). The perch-like fishes are a notoriously confusing group, and it’s no small feat to learn to differentiate among this excessively homophonous nomenclature. This is where Betancur et al 2017 is particularly useful, collating together in one concise reference all of the many taxonomic terms which tend to be so easily forgotten or misapplied.

Many of the major percomorphacean clades are quite controversial, particularly among morphologists, as there are often few, if any, obvious traits which serve to unite these hypothesized groups. For instance, what does a seahorse, a goatfish and a tuna have in common? According to the DNA, there must be something which has been overlooked. On the other hand, the union of gobies and cardinalfishes had been proposed from several anatomical traits prior to the inclusion of supporting genetic data. The Carangaria, however, was not. This motley crew includes large, predatory reef fishes like jacks and trevallies, as well as the various billfishes (e.g. marlin, sailfish) and benthic flatfishes. These are all said to possess a low number of vertebrae, but more study is needed to determine what else in their anatomy might be shared.

Finally, at the very end of this discussion, we get to the truly dominant reef fish groups, which seem to have first diversified somewhere around 100 million years ago. Included here are wrasses (and parrotfishes), surgeonfishes, angelfishes and butterflyfishes, damselfishes, blennies, dottybacks, pufferfishes, triggerfishes, and many others. The groups which typically lay demersal eggs (and which, in turn, tend to be the easiest to breed in captivity) fall under the Ovalentaria, while those whose eggs drift off into the plankton represent the Eupercaria.

It’s somewhat remarkable when we consider how old and speciose fishes are as a whole, that so much reef life should be concentrated into such a seemingly small sliver of biodiversity. Why did the Eupercaria and Ovalentaria flourish, while the Elopomorphs gave us little more than eels? These esoteric questions may not weigh heavily on the mind of most aquarists, but they are fundamental to understanding the life in our oceans. For anyone with even the most passing interest in fish biodiversity, I cannot recommend strongly enough taking a quick moment to explore the exquisite minutia of Betancur et al. 2017.