Walking Corals (Heteropsammia & Heterocyathus) are well-known for the bizarre symbiotic relationship they share with sipunculan worms—the coral makes a secure home for the worm and the worm helps out by dragging the coral around, righting its scleractinian host if it happens to get flipped over. But it seems these worms have some stiff competition in Japan, where a new species of hermit crab has been discovered making use of these same corals in place of the more traditional snail shell.

Diogenes heteropsammicola is a  handsome red and white species, with a pair of feathered appendages used for filtering food from the swift currents in which it lives. A number of specimens were collected in the Oshima Strait of Japan at depths of 60-80 meters, and the species had been previously reported from a shallower bay in Japan at just 30 meters. 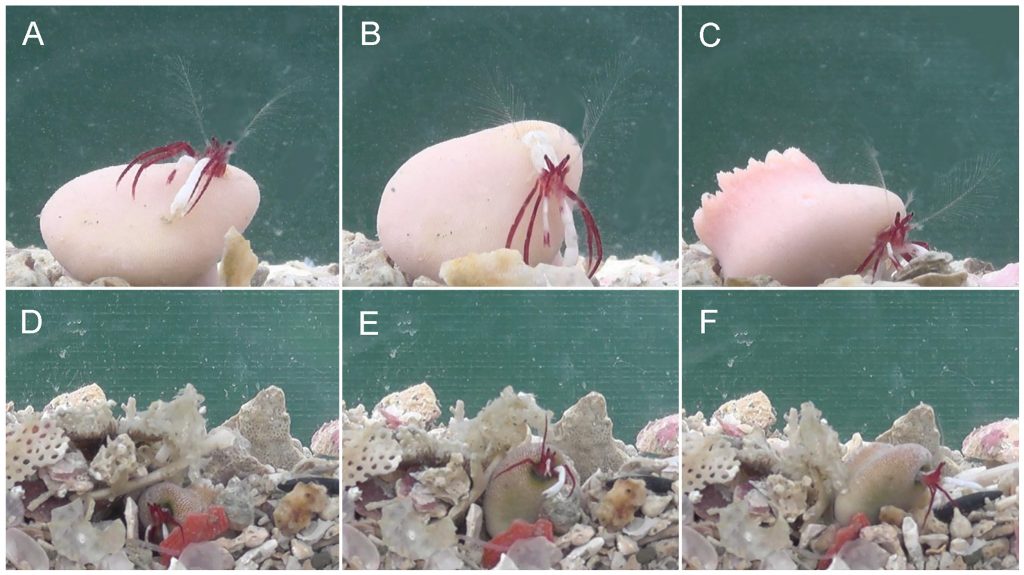 A–C, sequence of behaviors to recover from an overturned to upright position in which the hermit crab leans out of the overturned coral (A), grasps the bottom with its ambulatory legs and left cheliped (B), and turns the coral upright using the pleon (C); D–F, sequence of behaviors to overcome burial in sediment, whereby the buried hermit crab (D) pushes away the sediment using its chelipeds and ambulatory legs (E), and then crawls away (F).

But despite there being plenty of vacated gastropod shells in its habitat, this hermit crab has so far only been encountered living within walking corals. It’s body is apparently quite specialized for this, lacking the curved abdomen that its shell-dwelling cousins use to slip in and out of their coiled homes. And, just as with the sipunculans which it displaces, D. heteropsammicola lovingly tends to its host’s well-being, lending a hand when it gets buried or tipped over.

The population of walking corals at Oshima was found to contain a roughly even ratio of worms and crabs, which would seem to indicate that there isn’t any huge difference for the coral when it comes to what happens to be dwelling within it, crab or worm. But given the relative abundance of these hermits, why is it that we’ve yet to find them elsewhere in the Pacific where these corals occur? And how do these crabs end up living within the coral in the first place? Do they start off inhabiting a gastropod shell, only to transfer over to an unoccupied coral when they reach an adequate size? Or maybe they are fiendish murderers, dispatching with the sipunculan and stealing its dendrophylliid dwelling? There’s clearly much yet to be learned here.