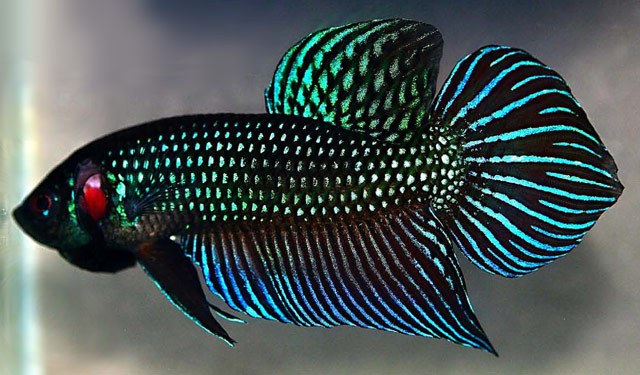 A photograph of the newly discovered Betta mahachaiensis displaying aggression.


The new species, named Betta mahachaiensis, was discovered by a team of biologists led by Chanon Kowaspupat of the Institute for Innovative Learning, Mahidol University in Thailand.  Their full description of the species is found in the lastest issue of Zootaxa and is Open Access, meaning anyone can read the paper for free.

Chanon describes the new fish as “distinguishable from other members of the B. splendens group in having an iridescent green/bluish-green appearance on the brown-to-black body background. The opercular membrane [bony flap covering the gills] has brown-to-black colour without red streaks or patches. The opercle has two parallel iridescent green or bluish-green vertical bars. Its dorsal, caudal, and anal fin rays are brown to black, contrasting with the iridescent green or bluish-green of the interradial membrane. Black transverse bars are present on at least the proximal twothirds of the dorsal fin, but not on the caudal fin. The colour of the pelvic fins is brown to black with an iridescent green/ bluish-green front margin and a white tip. Females possess similar characters but are less colourful than males.”

As mentioned, the new fish is part of the B. splendens and measures 1.4 inches in length, which is similar to other bettas.  It also inhabits brackish water areas in nipa palm swamps with a salinity ranging from 1.1 to 10.6 ppt and pH ranging from 6.87–7.80.

Interestingly enough, it appears as though this fish has been bred for over 10 years by local breeders before formal description by biologists.