Pelicier’s Wrasse (Halichoeres pelicieri) is a rarely seen species in the aquarium trade, known only from moderately deep waters around Mauritius and Reunion in the Indian Ocean. Since its description in 1982, few images of this fish have surfaced and fewer still of what a male specimen might look like, leaving some to question how best to distinguish it from another similar species in the region, the Goldstripe Wrasse (H. zeylonicus). 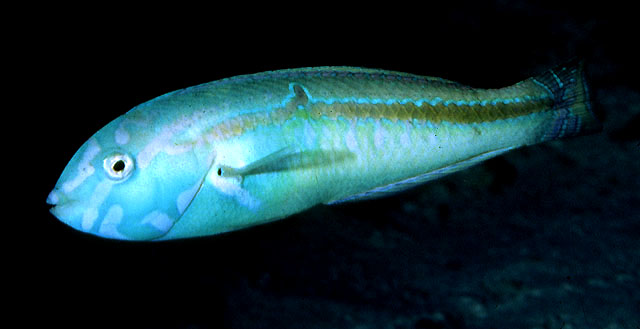 This has naturally led to confusion. In the recent description of H. gurrobyi, author Dr. Benjamin Victor stated, “There has been some confusion between [initial phase] H. pelicieri and H. zeylonicus in the southwestern Indian Ocean: indeed, there are reports of H. pelicieri from the African coast, but those are presently considered misidentifications of H. zeylonicus… It is also not entirely resolved what the diagnostic differences are for the [terminal phase] of H. pelicieri vs. H. zeylonicus.” With these lovely new videos of a beefy male, shared by Ornamental Marine World (the Mauritius-based aquarium collectors who discovered H. gurrobyi), we now have some clear diagnostic traits to compare. 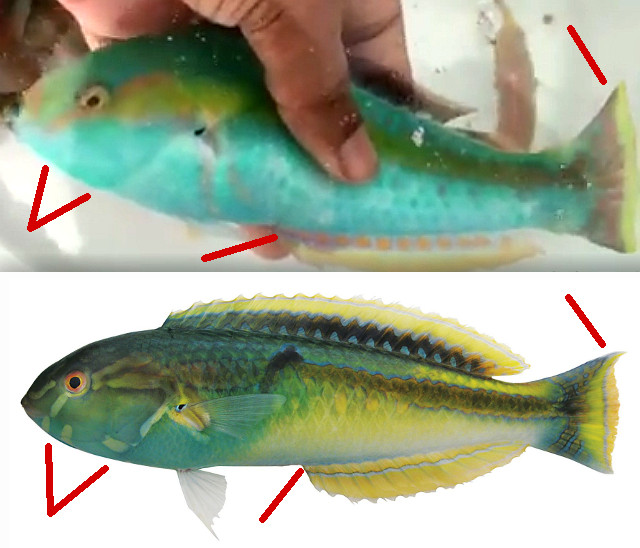 As I’ve illustrated in the diagram above, three features serve to distinguish these fishes. 1) The ventral colors of the head is mostly unpatterned in H. pelicieri, while H. zeylonicus possesses three small yellow markings that tend to turn purple in certain specimens. 2) The caudal fin has a thick yellow posterior margin, while in H. zeylonicus there is a more complex pattern consisting of a curved yellow subterminal stripe, a thin blue line margining it posteriorly and a medial orange margin. 3) The basal marking of the anal fin are a series of orange spots in H. pelicieri, versus a thick yellow stripe in H. zeylonicus. 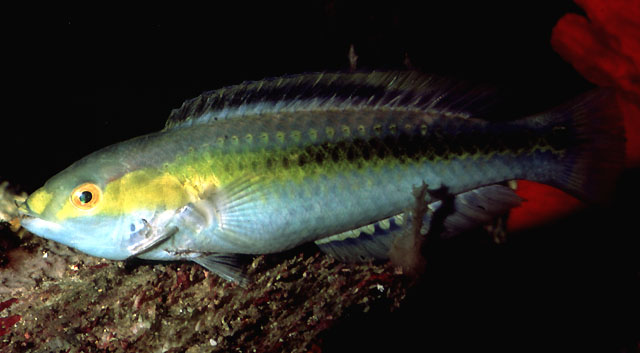 There are likely other features which also allow for ready separation of these two, but more specimens are needed to confirm how variable they may be. Most specimens of the Goldstripe Wrasse appear to develop a distinctive black spot in the middle of their body, but smaller individuals might not always show this and unusually dark specimens may have this obfuscated. The dark dorsal fin of H. pelicieri is possibly diagnostic as well, but, again, dark H. zeylonicus are known. Hopefully we’ll be seeing more of this enigmatic fish in the future, and my fingers are still firmly crossed for some Cirrhilabrus sanguineus…

Addendum: There’s another video of this specimen which refuses to embed into this article. Technology be damned!
Here’s the URL: https://www.facebook.com/Omarineworld/videos/1266988446665893/