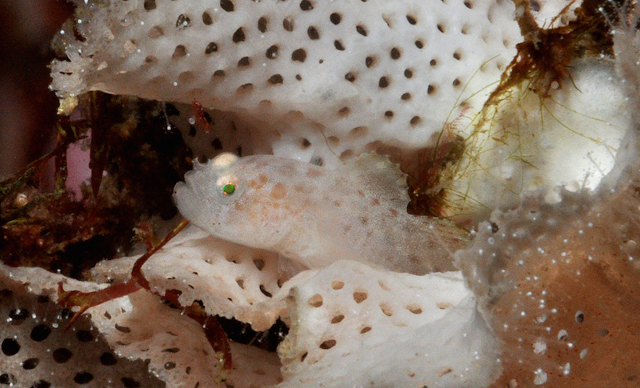 Described just yesterday by Gerry Allen and coauthors, the brand new goby Sueviota bryozophila is a small but significant find for coral reef enthusiasts. This remarkable little fish evaded our attention up until now thanks to its remarkably effective camouflage against the coral-like animal it calls home. Now, for the first time, video of this amazing commensal relationship has been caught on film.

The White Lace Coral (Triphyllozoon) featured in these clips is not actually a coral, but, rather, a very different type of organism classified in the distantly related Phylum Bryozoa, commonly referred to as bryozoans or “moss animals”. True to the name, many species in this group do look a bit more like an encrusting moss than an animal, but a closer look reveals that (much like in a coral) these are colonial creatures formed of numerous interconnected individuals, each of which extends a tiny, fan-like appendage to sieve the water for organic particulates. The beautiful white Triphyllozoon that our goby calls home appears all the more coral-like in that it secretes a calcitic skeleton and forms large, three-dimensional shapes. [Note that in these videos, numerous capitate hydroids cover the bryozoan, further increasing the resemblance to a coral.]

Nestled deeply within the convolutions of this bryozoan is where we can find Sueviota bryozophila… though only very rarely. In its description, Allen et al 2016 states that roughly 5% of colonies actually harbor specimens, and, to date, it is only known from a handful of locations within the center of the Coral Triangle. Whether this fish is truly endemic here or more widespread throughout the West Pacific will require the diligence of divers to seek out this reclusive fish. When viewed in the video above, it’s easy to see how this fish went unnoticed for so long, as it only pokes its head out briefly before flicking back within its host. 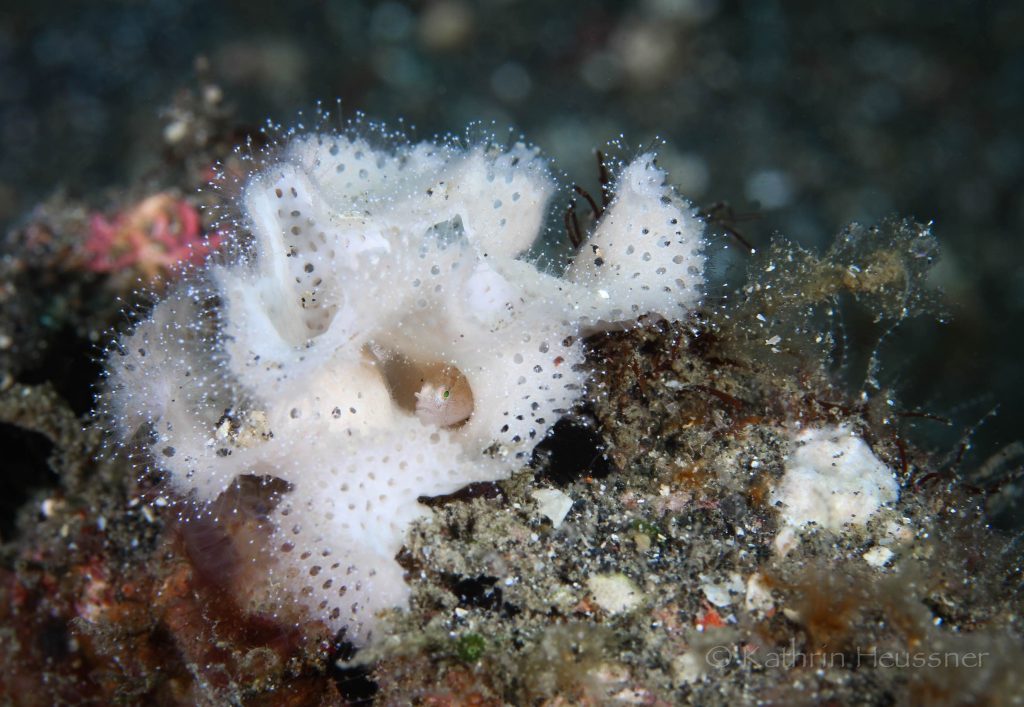 A Bryozoan Goby incognito within its home. Credit: Kathrin Heussner/Eco-Divers

The genus Sueviota contains only four other taxa, all of which are small and cryptic members of the Indo-Pacific coral reef fauna. These other species lack the distinctive white hue of the Bryozoan Goby, instead coming in a variety of colors that serve to conceal their presence. Both Sueviota and the closely related Eviota (which includes several species seen in the aquarium trade) are unusual amongst gobies for lacking the fused pelvic fins which normally gives the family its familiar suction cup-like ability to cling to surfaces; however, unlike others in its genus, the Bryozoan Goby does have its pelvic fins fused together. This, in addition to certain unusual nuances of the sensory pores and its idiosyncratic relationship with Triphyllozoon, suggests that this fish may be different enough to warrant placement in its own genus, but the authors state that more genetic study is required to confirm this. 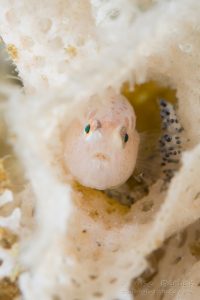 Just like in the coral-dwelling Gobiodon spp, the Bryozoan Goby appears to lay its eggs within the crevices of its host bryozoan. Credit: Mike Bartick

Aside from this delightful goby, these videos also highlight the unique community of reef invertebrates which live specialized lives amongst their bryozoan host. Snails, snapping shrimps and porcelain crabs (not to mention the aforementioned hydroids) all call this coral-like creature home, and, like this new goby, these species are also undescribed scientifically. There is no shortage of questions concerning this little ecosystem, particularly regarding what benefit, if any, the host bryozoan gets from associating with the various species which reside within it.

Bryozoans are one of the last great hurdles which reef aquarists have yet to overcome. These delicate filter feeders are virtually impossible to find in captivity, even as hitchhikers, but it’s not clear if this is due to our inability to keep them alive or merely from a lack of interest in the group. It’s hard to believe that there aren’t aquarists interested in keeping the beautiful White Lace Coral in captivity, and, given the discovery of this new goby, there is even more reason to find a way to succeed in its husbandry. A Sueviota/Triphyllozoon biotope could offer a worthwhile challenge for those expert aquarists looking to advance beyond the passé symbiosis of clownfish and anemone.