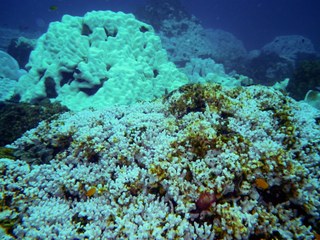 
A new modeling study shows that widespread bleaching events like this one in Thailand in 2010 will become more common in the future. However, the study also found signs corals may be adapting to warming — the question is if it can be fast enough to keep up with the rate humans are burning fossil fuels.

Coral reefs may be able to adapt to moderate climate warming, improving their chance of surviving through the end of this century, if there are large reductions in carbon dioxide emissions, according to a study funded by NOAA and conducted by the agency’s scientists and its academic partners. Results further suggest corals have already adapted to part of the warming that has occurred.

“Earlier modeling work suggested that coral reefs would be gone by the middle of this century. Our study shows that if corals can adapt to warming that has occurred over the past 40 to 60 years, some coral reefs may persist through the end of this century,” said study lead author Cheryl Logan, Ph.D., an assistant professor in California State University Monterey Bay’s Division of Science and Environmental Policy. The scientists from the university, and from the University of British Columbia, were NOAA’s partners in the study.

Warm water can contribute to a potentially fatal process known as coral “bleaching,” in which reef-building corals eject algae living inside their tissues. Corals bleach when oceans warm only 1-2°C (2-4°F) above normal summertime temperatures. Because those algae supply the coral with most of its food, prolonged bleaching and associated disease often kills corals.

The study, published online in the journal Global Change Biology, explores a range of possible coral adaptive responses to thermal stress previously identified by the scientific community. It suggests that coral reefs may be more resilient than previously thought due to past studies that did not consider effects of possible adaptation.

The study projected that, through genetic adaptation, the reefs could reduce the currently projected rate of temperature-induced bleaching by 20 to 80 percent of levels expected by the year 2100, if there are large reductions in carbon dioxide emissions.

“The hope this work brings is only achieved if there is significant reduction of human-related  emissions of heat-trapping gases,” said Mark Eakin, Ph.D., who serves as director of the NOAA Coral Reef Watch monitoring program, which tracks bleaching events worldwide. “Adaptation provides no significant slowing in the loss of coral reefs if we continue to increase our rate of fossil fuel use.”

“Not all species will be able to adapt fast enough or to the same extent, so coral communities will look and function differently than they do today,” CalState’s Logan said.

While this paper focuses on ocean warming, many other general threats to coral species have been documented to exist that affect their long-term survival, such as coral disease, acidification, and sedimentation. Other threats to corals are sea-level rise, pollution, storm damage, destructive fishing practices, and direct harvest for ornamental trade.

According to the Status of Coral Reefs of the World: 2000 report, coral reefs have been lost around the world in recent decades with almost 20 percent of reefs lost globally to high temperatures during the 1998-1999 El Niño and La Niña and an 80 percent percent loss of coral cover in the Caribbean was documented in a 2003 Science paper. Both rates of decline have subsequently been documented in numerous other studies as an on-going trend.

Tropical coral reef ecosystems are among the most diverse ecosystems in the world, and provide economic and social stability to many nations in the form of food security, where reef fish provide both food and fishing jobs, and economic revenue from tourism. Mass coral bleaching and reef death has increased around the world over the past three decades, raising questions about the future of coral reef ecosystems.

In the study, researchers used global sea surface temperature output from the NOAA/GFDL Earth System Model-2 for the pre-industrial period though 2100 to project rates of coral bleaching.

Because initial results showed that past temperature increases should have bleached reefs more often than has actually occurred, researchers looked into ways that corals may be able to adapt to warming and delay the bleaching process.

The article calls for further research to test the rate and limit of different adaptive responses for coral species across latitudes and ocean basins to determine if, and how much, corals can actually respond to increasing thermal stress.

In addition to Logan, the other authors of the paper were John Dunne, NOAA Geophysical Fluid Dynamics Laboratory; Eakin, NOAA’s Coral Reef Watch; and Simon Donner, Department of Geography at the University of British Columbia. NOAA’s Coral Reef Conservation Program funded the study.


NOAA’s mission is to understand and predict changes in the Earth’s environment, from the depths of the ocean to the surface of the sun, and to conserve and manage our coastal and marine resources. Join us on Facebook, Twitter, Instagram and our other social media channels.