Not all Zoas are social 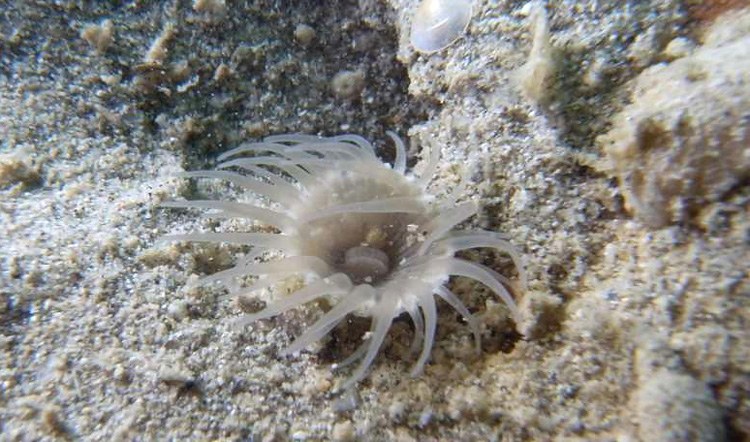 The oral disk of this new species of zoantharian peaks out above the soft sand. Photo credit: Takuma Fujii

The scientists stumbled upon a solitary individual polyp while conducting SCUBA surveys around the southern Japanese island of Okinawa. They noticed that the creatures were buried almost completely in the soft sediment of the seafloor. It was only their oral disks and tentacles that were protruding above the surface.

Generally, most known zoantharians are colonial (hence their common name of ‘colonial anemones’), and many dwell in shallow waters of subtropical and tropical regions, where their large colonies can be found on coral reefs.

However, these newly discovered polyps were not only leading solitary lives. They were also found to lack zooxanthellae, single-celled organisms that coexist in symbiosis with certain marine invertebrates, also typical for the majority of zoantharians.

The discovery of this unusual new species is reported in the open access journal ZooKeys.

Solitary zoantharian species, such as this one, are known from scant few reports, and only three species are described, all reported more than 100 years ago from the Indo-Pacific region. Overall, very little is known about the hereby studied genus Sphenopus.

The new species, named Sphenopus exilis, is much smaller than the other three Sphenopus species, with its polyps measuring approximately 3 cm in length. It is currently only known from two bays on the east coast of Okinawa Island.

Both of the bays where Sphenopus exilis is found are threatened by development, with one of the bays currently the center of controversy over a proposed American military base expansion and landfill.

“This report demonstrates how much more research is needed on these understudied ecosystems,” stated lead author Dr. Takuma Fujii.

“The only reason this species was discovered was that the right person was in the right place at the right time,” added co-author Dr. James Reimer.

“Such research also shows how important it is to have specialist researchers participate in surveys — otherwise, we might be missing a lot of the biodiversity present in the marine realm simply because we don’t know what we are looking at,” he concluded.