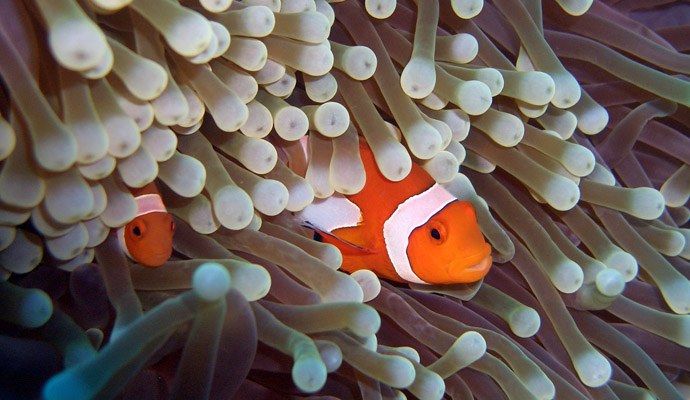 
From the UMass Dartmouth:

UMass Dartmouth Biology Assistant Professor Dr. Robert Drew has been awarded the very prestigious National Science Foundation (NSF) CAREER award, which recognizes young, on the rise faculty members within their respective fields of education and research. The award will provide $850,000 over 5 years to fund Dr. Drew’s work on clownfish and the mutually beneficial relationship with sea anemone, a flower like species attached to the bottom of the ocean surface that are known to sting the flesh of aggressor or prey with a dose of venom. Clownfish notably are unharmed by the anemone’s stinging tentacles. Drew will explore this mysterious physiological relationship.

“Many kids and adults are familiar with the clownfish-sea anemone story from movies, books, and visits to public aquariums, making it one of the most widely recognized examples of a symbiotic relationship,” noted Dr. Drew. “I’ve been interested in this relationship since I was an undergraduate and now, with access to new technology, we can begin to find answers to a mystery that has persisted, despite more than 50 years of research.”

Clownfish are relatively poor swimmers and rely on sea anemone for shelter from predators. In turn, clownfish aggressively chase away predators that eat sea anemones and supply the anemone with nutrients for photosynthesis. This is made possible by the fact that the fish can swim unharmed among the stinging tentacles of anemone. What little is known is that the protection involves the mucous coat of clownfish, but understanding the uniqueness of clownfish mucous requires further investigation.

Utilizing powerful, newly developed genomic technologies, research at multiple levels will be conducted to study clues from the genes of clownfish that appear to make it invisible to the sea anemone and what in its physiology elicits such a drastic response to a anemone sting as compared to other fish species.

Other fish species have also independently evolved close interactions with sea anemones and other types of aquatic animals which use specialized cells to capture prey, such as jellyfish and corals. From an evolutionary perspective, it is astonishing that species of different ancestral lineages associate with sea anemones in a similar relationship. Dr. Drew will investigate these other species that associate with anemones to determine what is involved in these convergent physiological processes.

The study of intimate interactions between two species has produced innumerable amounts of research. The interdependence of living, and even nonliving, organisms is at the foundation of our being and survival, which has continued to evolve for millions of years. However, an understanding of many of the interactions between millions of species on the planet still remains incomplete. Additionally, much of the current research into symbiotic relationships focuses on interactions between unicellular organisms and their larger hosts, such as gut bacteria that lines the intestine in humans. In these relationships, the species live within the host or sometimes inside the cells of the host. In order for these associations to occur, these organisms needed to evolve ways of evading the immune systems of their hosts.

This grant also supports the integration of this research into education tools for several different age levels. Dr. Drew is developing an open-ended classroom research experience for his Genetics course at UMass Dartmouth, using clownfish to reinforce concepts taught in the classroom, providing his undergraduate students a taste of research firsthand.  The New Bedford Ocean Explorium will also be an essential partner in launching education activities and teacher training workshops to enhance regional K-12 science education.

“We look forward to the educational opportunities presented through the NSF CAREER grant with Dr. Robert Drew.  The Ocean Explorium is a leader in combining education with living exhibits and hands-on experiences and has two exhibits that house clownfish,” said Abbey Spargo, Executive Director of the Ocean Explorium, which houses UMass Dartmouth’s “Science on a Sphere” that creates an image of the planet, displaying historic and real time information, graphically presented in 3-D. “Together with Dr. Drew, the Ocean Explorium education team can provide multiple opportunities for students to use these charismatic organisms to explore the topics of biology, species interaction, and more. This new initiative demonstrates the partnership between UMass Dartmouth and the Ocean Explorium and our joint commitment to public education.”

The Faculty Early Career Development (CAREER) Program is a NSF-wide activity that offers the most prestigious awards to young, junior faculty who embody the role of teacher-scholars. This is recognized through outstanding research and education, the combination of which fulfills the mission of the faculty member’s particular organization, thereby, building a foundation for a lifetime of leadership in education and research integration.

“This significant announcement builds upon the exceptional work of our Biology faculty and students,” offered UMass Dartmouth Provost Mohammad A. Karim. “Dr. Drew is one of our rising stars and I look forward to his great works and continued collaborations of education and research.”

With the announcement of this award, Dr. Drew has now secured his third federally-funded grant this year, including $150,000 in funding from the USDA’s National Institute of Food and Agriculture (NIFA) to investigate a genetic link between stress and growth in rainbow trout and $125,000 in funding from the NSF, in which Dr. Drew serves as a co-investigator with Biology Department colleague Dr. Tara Rajaniemi, a plant ecologist, on a project using DNA markers to investigate competition between roots of different old field plant species.