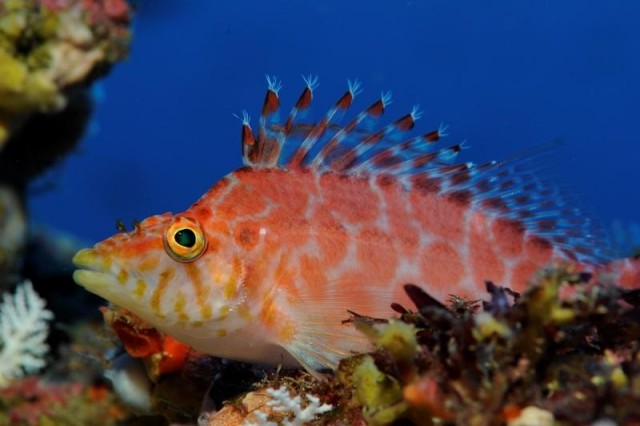 Hawkfishes (Family Cirrhitidae) are one of the most characteristic groups associated with tropical coral reefs. The 33 species currently recognized are typically to be found perching out in the open atop rock and corals in the uppermost portions of the reef, posturing in a manner that might lead one to believe these fishes are the extroverts of the piscine realm. But there is one member of the group which bucks this trend, a rarely seen species more at home within the dark recesses of caves and only to be found deep in the mesophotic depths—the Cave Hawkfish (Cirrhitichthys guichenoti). 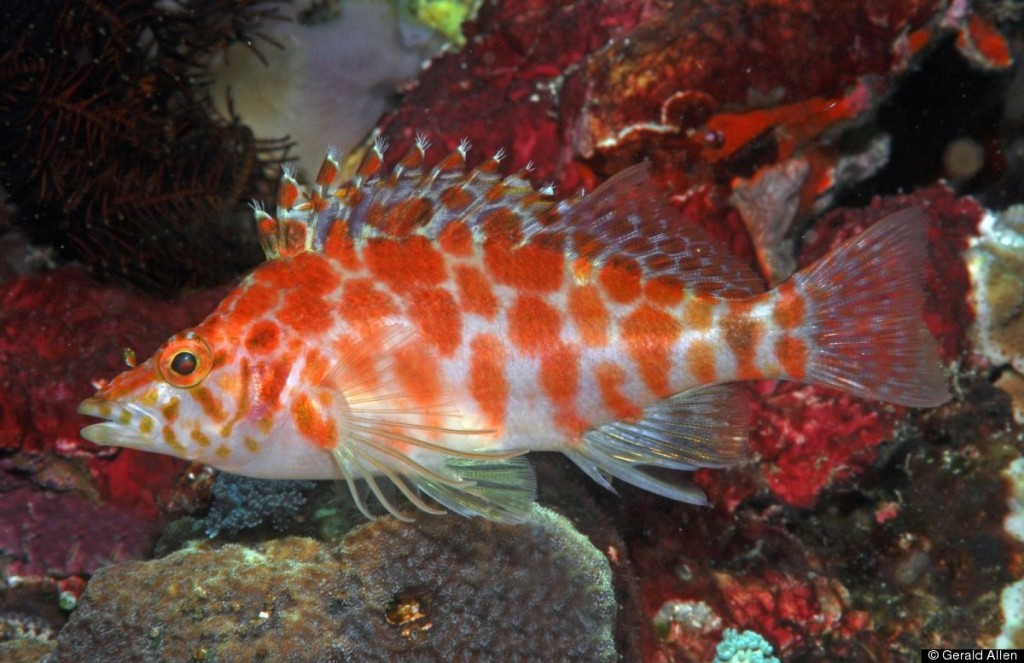 From Alor, Indonesia, in a cave at 50 meters. Credit: Gerry Allen

Described in 1880 and named after the French zoologist Alphone Guichenot, the Cave Hawkfish is a seldom seen species which had until recently only been reported from the Mascarene Islands and South Africa. Specimens captured by Dr. Gerry Allen at 50 meters in Alor, Indonesia have served to extend the range considerably, and extending it even further are several specimens which have been photographed in parts of Japan (Izu and Ogasawara Islands). Assuming this species has a widespread range in the Indo-Pacific, it’s truly remarkable how infrequently this fish is encountered and a testament to just how reclusive it is, particularly for a cirrhitid. 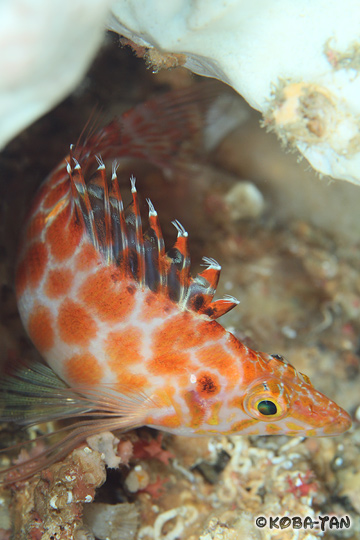 Like so many other smaller hawkfishes, C. guichenoti has a white base coloration overlaid with a patchwork of heterogenous red blotches. In this regard, it is all too easy to mistake it for a few superficially similar species (particularly C. oxycephalus, C. falco & C. aprinus). It’s difficult to pick any single trait that can reliably serve to identify this fish, so it’s best to familiarize oneself with the entire genus. Some of the more diagnostic characteristics to look for are the short lines radiating out from beneath the eye (which serves to separate it from C. oxycephala) and the highly spotted patterning (which is more vertically barred in C. falco & C. aprinus).

Specimens in the aquarium industry are seemingly few and far between, so odds are that any small, red and white hawkfish seen at your local fish purveyor will not be the Cave Hawkfish, though it’s not implausible that one might sneak through the cracks now and then misidentified. Judging from photographs available online, this is one of the most rarely offered of hawkfishes—far scarcer than some of the other rarely available species, like Cirrhitichthys aureus and Paracirrhites xanthus. In fact, the only evidence I can find of this species having ever been collected for the aquarium trade is a single photograph from DeJong Marinelife. 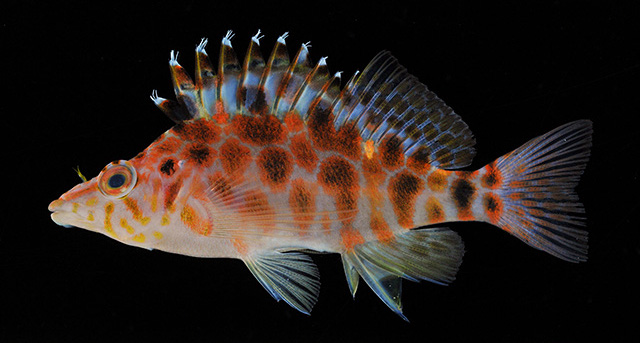 Now, this could very well have been the end of the story concerning this mysterious fish, as little else is known of it, but in doing some sleuthing into the evolutionary history of the hawkfish family I’ve discovered that, in all likelihood, Cirrhitichthys guichenoti is currently misclassified. The phylogenetic tree shown below is based on the mitochondrial CO1 gene and represents the most exhaustive study (as far as biodiversity) to date. For the most part, it agrees with previously published efforts on the group and shows that most of our currently recognized genera correlate well with the presumed evolutionary history of the family. 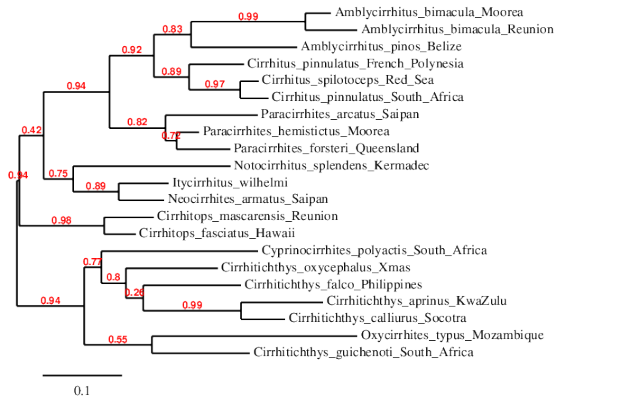 The exception is the Cave Hawkfish, which is found (albeit with somewhat equivocal statistical support) as the sister taxon to another deeper-water species—the Longnose Hawkfish Oxycirrhites typus. Aside from the genetics, there are morphological considerations which suggest that this relationship is legitimate. Specifically, the lateral line scale count for C. guichenoti is 52, which is well within the range for O. typus (51-53), but far removed from all other Cirrhitichthys (40-47). Additionally, there are 4 rows of scales above the lateral line at the middle of the body in C. guichenoti and O. typus, while all other Cirrhitichthys have just 3. And, following the same trend, Cirrhitichthys typically has one fewer dorsal soft ray (12 vs 13) than seen in C. guichenoti and O. typus. 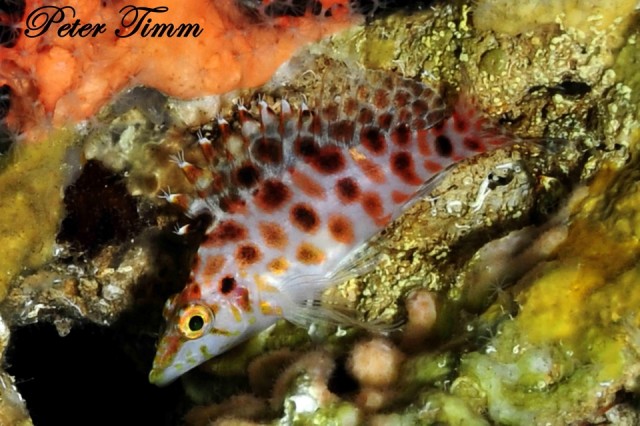 Given the considerable similarities in ecology, morphology and genetics, it seems highly likely that the Cave Hawkfish will need to be reclassified as a species of Oxycirrhites, making it just the second species in that genus. One trait which could prove useful for delimiting the group is the elongated snout shared by both of these fishes, but further work will be needed to prove this. For now, Cirrhitichthys guichenoti will continue to remain one of the great mysteries of the reef, an elusive phantom of a fish for which we know so tantalizingly little.