Of the dozens of Canthigaster species that occur throughout the tropics, few are quite so confounding as the Natal Toby. Though described nearly a century and a half ago, there are still differing opinions regarding whether it’s even a distinct species or, instead, just a synonym for one of the most widespread members of the group, the Ambon Toby (C. amboinensis). And, adding to the confusion, images of this fish are almost non-existent, particularly so from its type location. So let’s try to make sense of this… 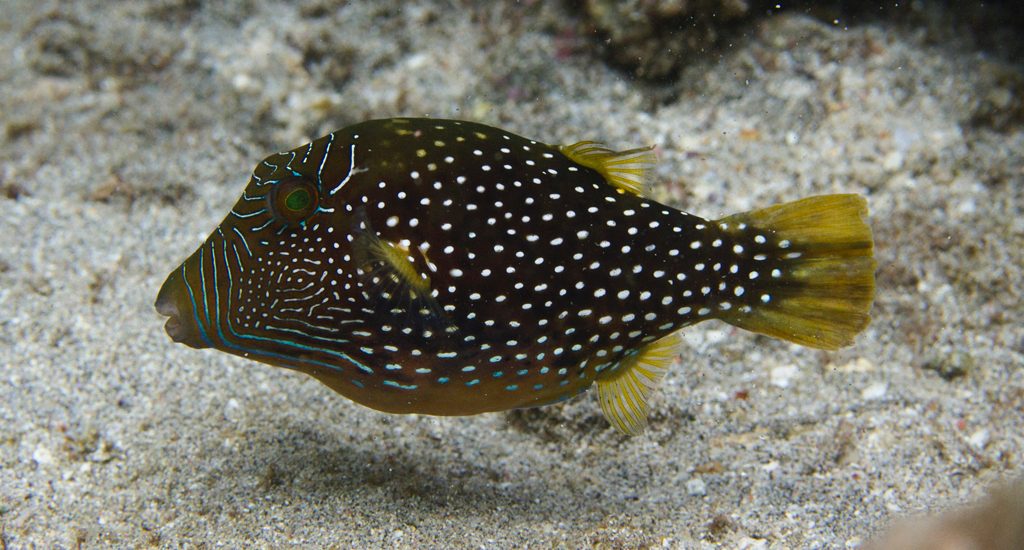 The “Natal” alluded to in the common and scientific names of C. natalensis is a region off the coast of Eastern South Africa, and it was here that the first specimen was collected and described from in 1870. Unfortunately, this description leaves much to be desired, as it consists of just a couple short sentences that serve to distinguish it (as a “variation” rather than as a full “species”) from the similar C. amboinensis: “The sides of the head in front of the pectoral fin ornamented as the body; cheeks with short horizontal and vertical bluish lines. Basal half of the caudal fin spotted as the body.” 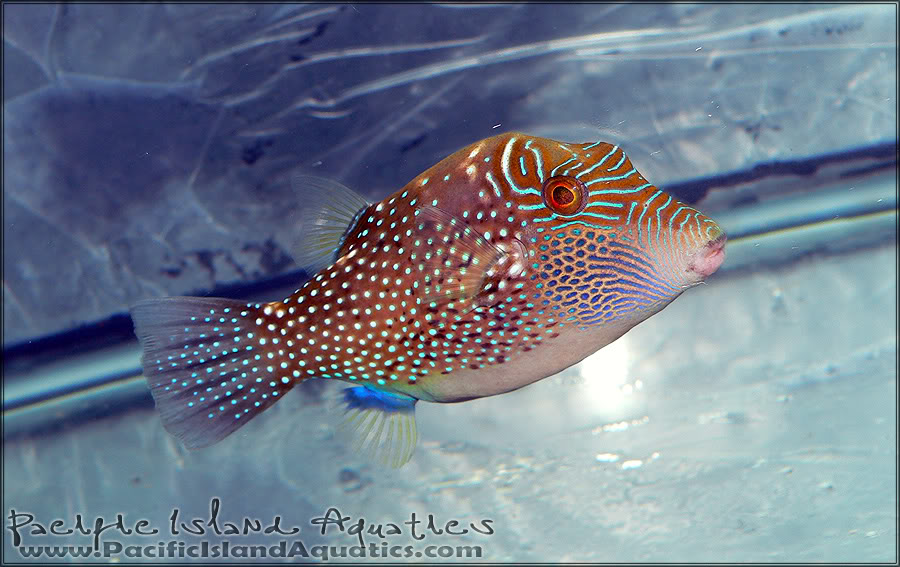 So how does one actually tell C. natalensis from C. amboinensis? The most salient trait to look for (and really the only relevant one mentioned in the original description) are the horizontal lines along the lower portion (the “cheeks”) of the head. Both juveniles and adults of C. natalensis have this pattern strongly developed, while the similar C. amboinensis has this region filled with a series of short parallel lines that descend obliquely from the patch of fine spots present along the sides of the head. 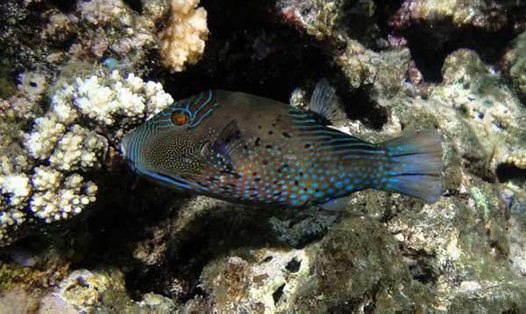 There is a second trait that is equally useful for diagnosing this fish, but it can only be observed in mature specimens. In both the Natal Toby and the Ambon Toby, juveniles are covered with fairly large white spots along most of the body. As individuals mature into males and females, these spots become finer and more numerous, ultimately taking on a bluer tone. The difference to look for is along the back, as these blue spots coalesce into a series of parallel lines in the Natal Toby, whereas this area remains spotted in the Ambon Toby. Only a few images seem to exist of the mature C. natalensis, and I’ve yet to see any mention of this difference in any description of it, which has no doubt lead to some of the lingering confusion. 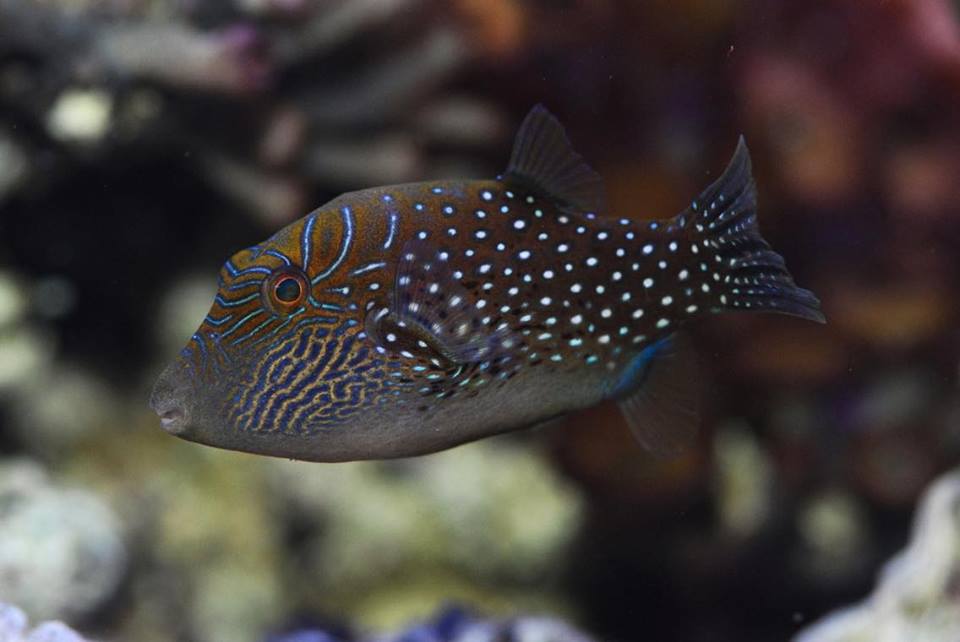 In the grander scheme of Canthigaster evolution, these two species appear to occupy a highly distinct branch that likely diverged quite early on. Unlike others in the genus, C. natalensis and C. amboinensis have a greater number of dorsal (11-12 vs. 9-10) and anal (11 vs. 8-10) fin rays. These fin ray counts are also higher than in the closely related genera Plagiocephalus and Dichotomyctere, which might indicate that this was something that evolved independently. One possible explanation for this is the preference that these two species show for turbulent waters, where a more robust finnage would help them swim about. In particular, C. amboinensis is noted to favor surge channels in oceanic reefs, which probably helps to explain why there are so few images of this fish in the wild—it’s hard to take a decent shot when you’re in a surge channel. On the other hand, the few records of C. natalensis show it to appear most frequently in coastal rock pools and shallow lagoons. 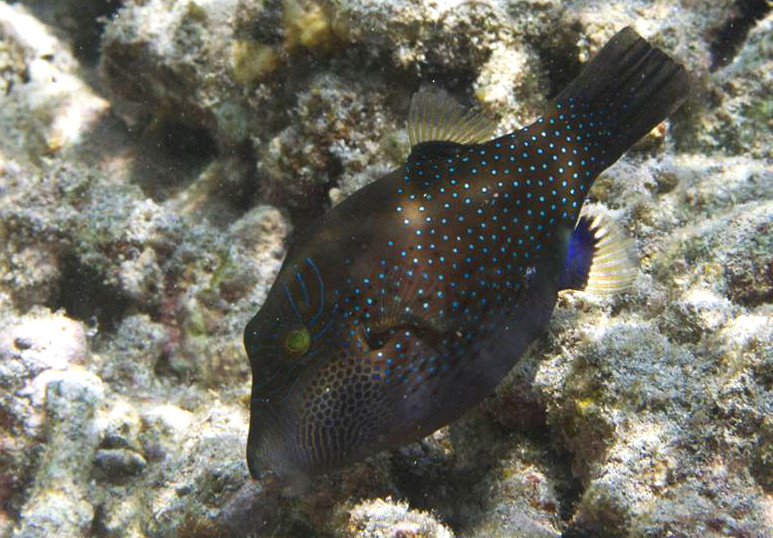 Canthigaster amboinensis from Réunion, where it is sympatric with C. natalensis. Credit Elisabeth Morcel

The Ambon Toby is one of the most broadly occurring members of the genus, occurring nearly everywhere in the Indo-Pacific, even straying into the Galapagos Islands. This is typical for Canthigaster, as they are almost universally spread widely thanks to their extended pelagic larval stage. C. valentini is another example of a single species that can be found just about everywhere, but most other major evolutionary lineages in the genus are instead divided into smaller taxa restricted by ecoregion, such as with the Indian Ocean Tyler’s Toby and the Pacific Leopard Toby. One of the few exceptions to this rule is the Natal Toby.

C. natalensis occupies a highly anomalous distribution, being restricted to reefs in South Africa north to Mozambique and east into the Mascarenes, with questionable records from Mayotte and Chagos. This limited subtropical range in the Southwest Indian Ocean stands in stark contrast to the otherwise widespread, tropical ranges found in nearly every other Canthigaster, indicating that this one species has likely evolved to specialize in cooler habitats. Though it has only rarely been collected for the aquarium trade, the Natal Toby no doubt benefits from being kept in similarly chilly aquarium temperatures.

It’s worth pondering what the future might hold for C. natalensis. With the scientific community predicting the planet’s oceans to warm, what effect will this have on the already limited range for a fish like the Natal Toby. We can ask the same question for Apolemichthys kingi while we’re at it, as it too has an almost identical distribution in the subtropical Southwest Indian Ocean. Clearly, it doesn’t take much of a difference in temperature to restrict these species from a particular habitat, or we would expect to find them in nearby places like the Seychelles and Kenya. So what happens if South Africa warms a degree or two? Will these sorts of endemic fishes adapt or will they ultimately be driven into extinction?