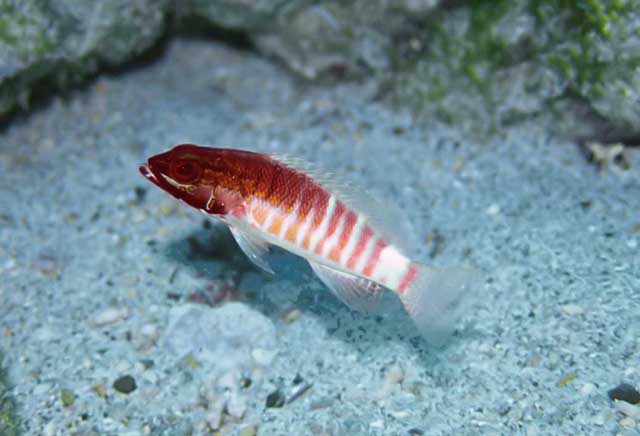 The miniature Caribbean basses of the genus Serranus are a frequent and popular offering in the aquarium trade, but few are familiar with their close relatives in the Eastern Pacific. Like their Atlantic siblings, these fishes are attractively patterned and, were it not for their relative obscurity, would make for desirable aquarium fodder. But, of the half-dozen species found in the region, only three occur in shallow depths, and only one is widespread enough for aquarium collection to be feasible. 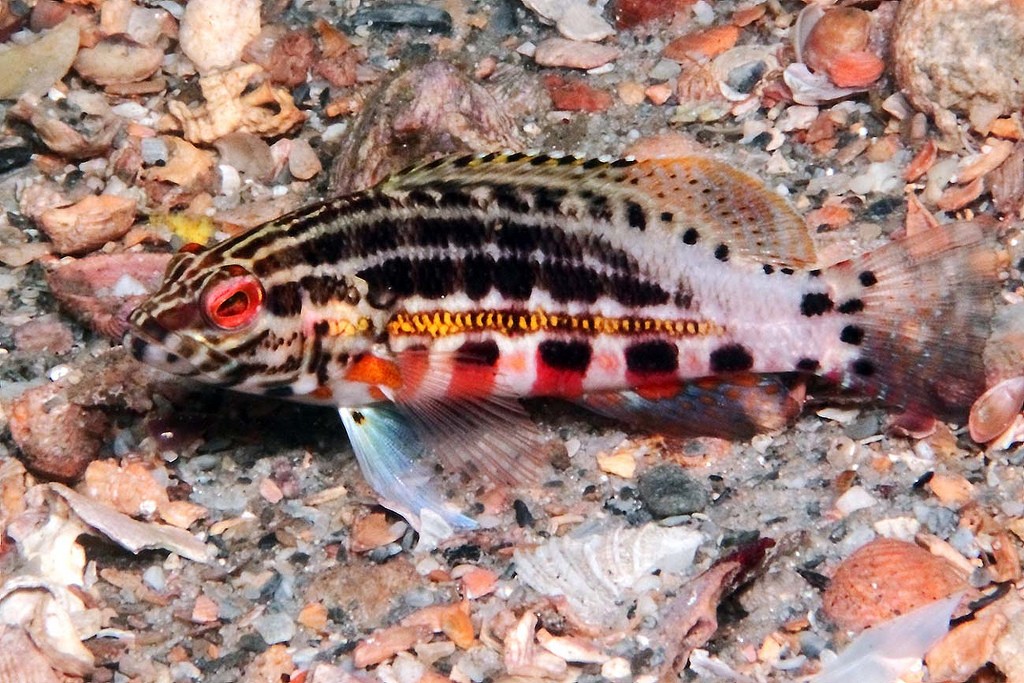 The 29 recognized species of Serranus basses form a motley crew, with several of the major species groups likely to represent distinct evolutionary lineages in need of reclassification into new genera. But much remains uncertain regarding the relationships of these fishes. For instance, the last major study on this genus regarded all of the deepwater Pacific species as being incertae sedis—essentially the scientific equivalent of ¯\_(ツ)_/¯. The shallow-water fauna is better understood and appears to form a close group with familiar species like the Lantern Bass (S. baldwini), the Orangeback Bass (S. annularis), the Harlequin Bass (S. tigrinus), and the rarely seen Snow Bass (S. chionaraia). There is also an undescribed African species which likely belongs here as well, and, together, these fishes form the subgenus Prionodes. 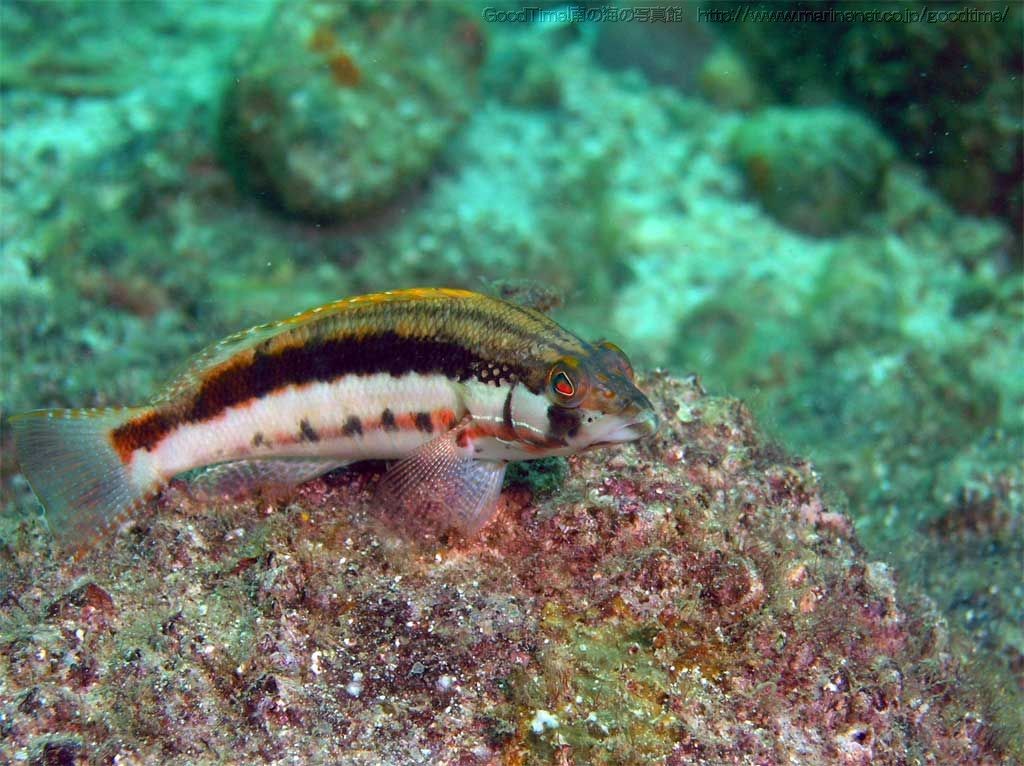 In the Eastern Pacific, these basses are known commonly as “Serranos”, with the most widespread of these being the Barred Serrano (S. psittacinus), found everywhere from Baja to Ecuador and west to the Galapagos Islands. This fish is highly variable in its patterning (perhaps relating to size, sex, mood or its je ne sais quoi), appearing in several phenotypes ranging from those possessing a brown back and a thick, black stripe to those with a lighter coloration and numerous vertical bars. It’s also quite a bit larger than related species, topping out at 18cm. This is the only Pacific species to have been collected for the aquarium trade, though specimens are not seen with much frequency—presumably the drab appearance and limited collection in the region accounts for this.

One interesting note concerning S. psittacinus is its unusual relationship with a moray eel, Muraena lentiginosa. Observations from La Paz, Mexico (video link) show it (alongside a hamlet, Alphestes immaculatus) following closely as the eel pokes about in search of prey. This so-called “following behavior” is known from a variety of predatory reef fishes, which utilize the efforts of their anguilliform partner to flush prey out for an easy meal. Lazy, gluttonous fish… 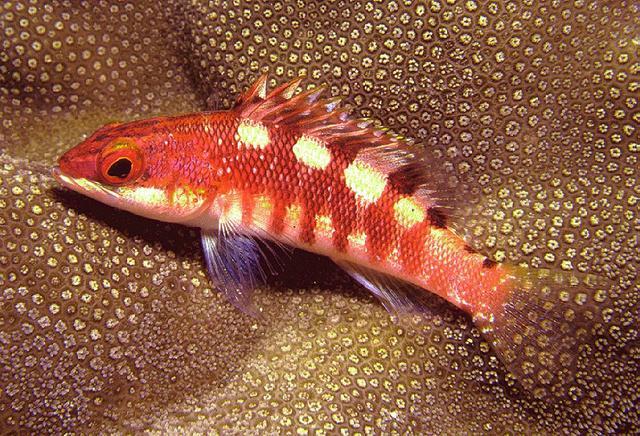 The other Pacific Serranus to discuss here are apparent sister species to S. psittacinus, but each displays a highly endemic range associated with some of the more remote oceanic archipelagos in the region. The Socorro Serrano (S. socorroensis) is known only from Socorro Island (part of the Revillagigedo Islands that lie some 240 miles to the southwest of Baja). This small island is renowned for the high rate of endemism in its terrestrial fauna, but it’s aquatic biodiversity is just as unique, in particular, being home to the famed Clarion Angelfish (H. clarionensis). With a maximum size reported at 8.5cm, this colorful red and white bass would make for a pleasant enough addition to an aquarium, but, given the restrictions on collecting in this region, it isn’t terribly likely that we’ll be seeing specimens anytime soon. 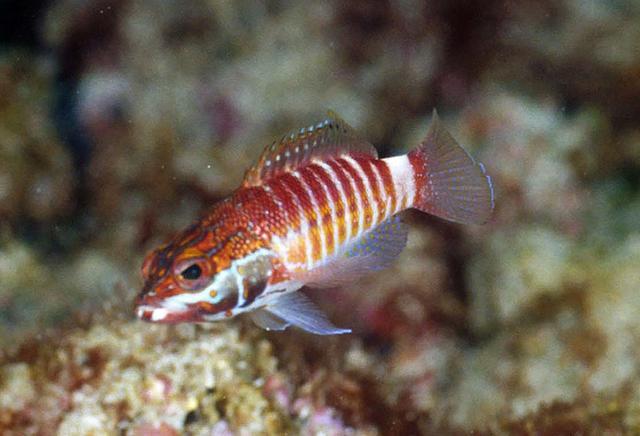 Easily the most desirable of the Pacific species is the Cocos Serrano (S. tico), a brilliant little fish with a pulchritudinous patterning of fine red and orange vertical bars that forms a dark-to-light gradient along the length of the body. To date, it has only been found at Cocos Island (an obscure speck of land west of Costa Rica) and Malpelo Island (an obscure speck of land north of Columbia). Interestingly, this species doesn’t appear to have been described in the traditional scientific sense, as there is no holotype specimen associated with it—this puts it in a nomenclatural grey area of being recognized as existing without technically existing… which somebody might want to address at some point. Regardless, this delightful little fishy will likely never be available for aquarists, as its only known habitats are both national parks and UNESCO World Heritage Sites. Serranus tico, if it even exists as such, is undoubtedly one of the ultimate “book fishes”.