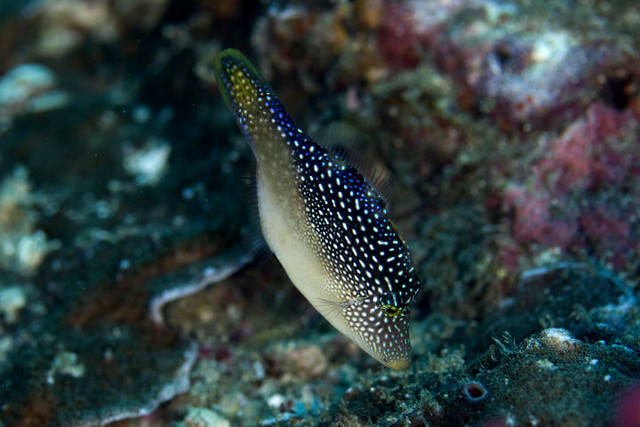 Coral reef fishes are often masters of mimicry, capable of matching the appearance of other species with near perfect verisimilitude. Think of the uncanny similarities between some of the Meiacanthus and Plagiotremus fangblennies, or the well-known subterfuge of the False Cleanerfish (Aspidontus taeniatus), or the remarkable wrasse-mimicking juveniles of the Slender Grouper. But, perhaps the apogee of this fishy phenomenon can be seen in the Mimic Filefishes of the genus Paraluteres, whose likeness to certain pufferfishes is so convincing in life that the two are almost indistinguishable when seen swimming together along a coral reef.

The Black Saddle Mimic Filefish Paraluteres prionurus is a species which should be familiar to many aquarists, as this widespread Indo-Pacific fish is a commonly exported species for the aquarium trade. It’s appearance is strikingly similar to the noxious fish it models itself after—the similarly widespread Valentini or Black Saddle Pufferfish (Canthigaster valentini). There are two key traits to look for when attempting to properly identify these fishes: 1) the dorsal and anal fins are far smaller in Canthigaster. 2) Paraluteres possesses a spiny dorsal fin, though this can often be difficult to detect as it is typically kept concealed. Of course, filefishes are also generally more slender and incapable of puffing themselves up, but, from a distance, it is remarkable just how similar these two distantly related fishes can appear. 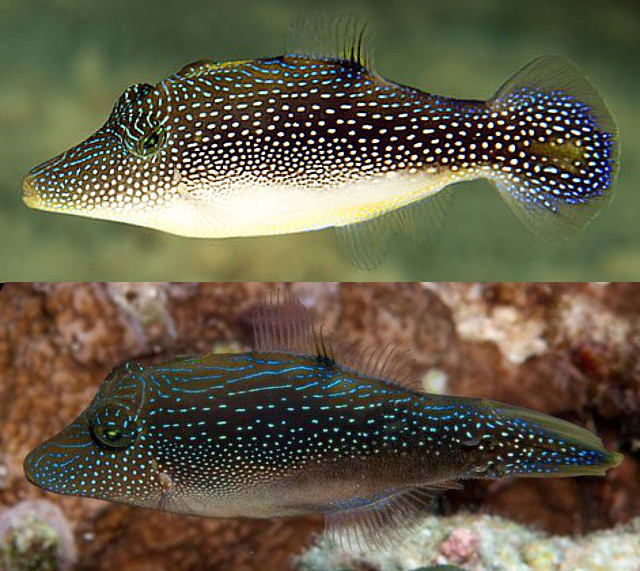 It’s important at this point to recall that the Valentini Pufferfish is not found in the Red Sea (though many references incorrectly claim the opposite), and, hence, there are no filefishes to mimic them there. Instead, we come upon an entirely different looking species in the form of the Red Sea Mimic Filefish Paraluterus arqat, which serves as a doppelganger for a very different looking model—Canthigaster margaritaceus. This species is part of a species complex familiar to aquarists as the Blue Spotted Pufferfishes. Consensus on how to classify them (either as a single widespread species or several regional endemics) has varied over the years, but, as I’ll discuss in my upcoming review of that genus, populations show consistent geographic differences warranting the recognition of numerous discrete species. In the Indian Ocean, the widespread C. petersii is distinct from the Red Sea C. margaritaceus, and, unsurprisingly, we see cause to believe that the filefishes which mimic these puffers are similarly unique. 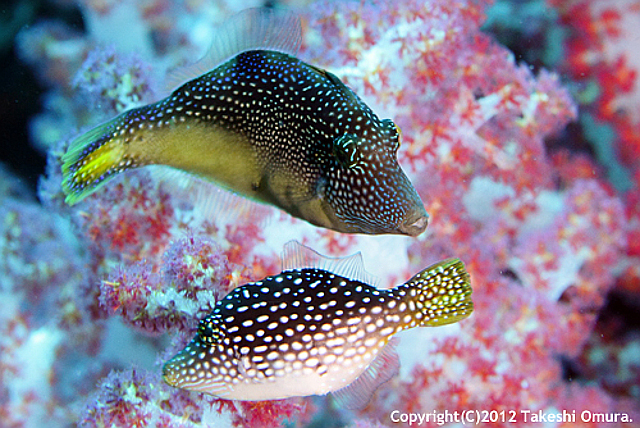 However, rather than there being a widespread Paraluteres to match the widespread C. petersii, we instead find that this mimic is seemingly restricted to the Andaman Sea. Areas such as the Maldives, the East African coastline and the Mascarene Islands—all places where we can find the model species C. petersii in abundance—appear devoid of mimic filefishes. Why this is so is anyone’s guess at this point, and it’s entirely possible (albeit a bit implausible) that we simply haven’t noticed their presence. 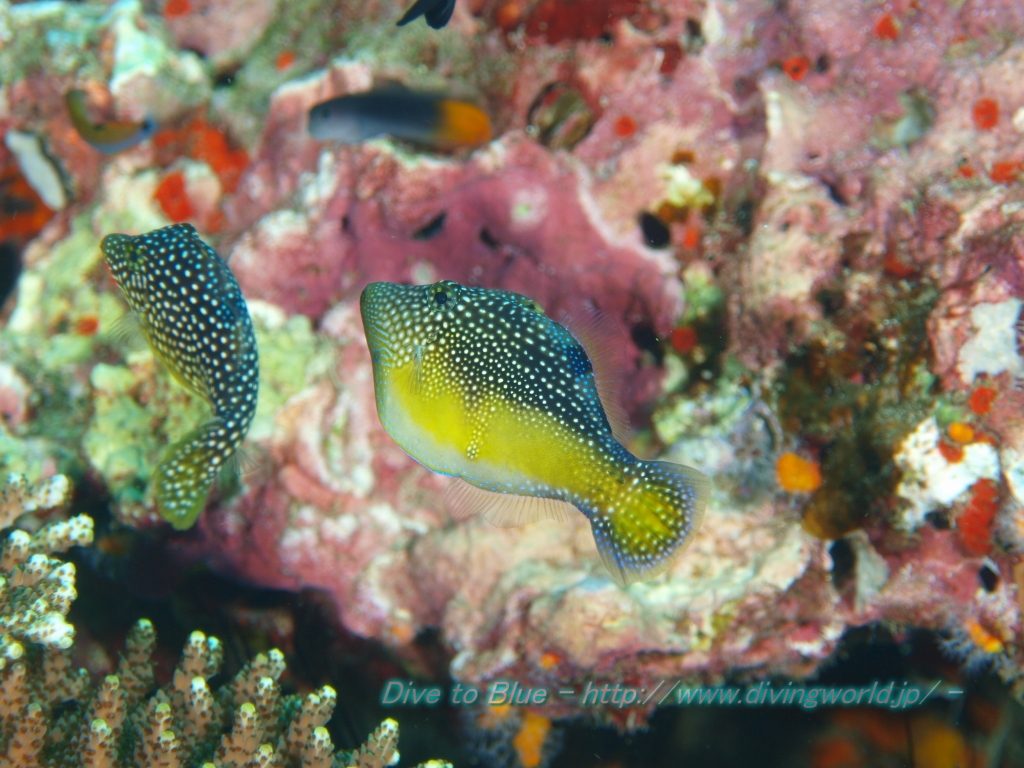 The Andaman Mimic Filefish observed at the Similan Islands. Credit: dive to blue

This Andaman Sea Mimic Filefish is presumed to be a distinct species from that in the Red Sea, particularly given the vast geographic separation dividing the two, but, to date, this fish remains scientifically undescribed. The phenotypic differences which separate P. arqat from the Andaman P. cf arqat are subtle, just as they are between the Canthigaster species which serve as their models. Unfortunately, few photos exist of either filefish, but a couple traits may prove diagnostic: 1) the Red Sea arqat has a sharper demarcation between the brown back and white belly. 2) the Andaman arqat has lines along the throat, whereas the Red Sea form is generally spotted. 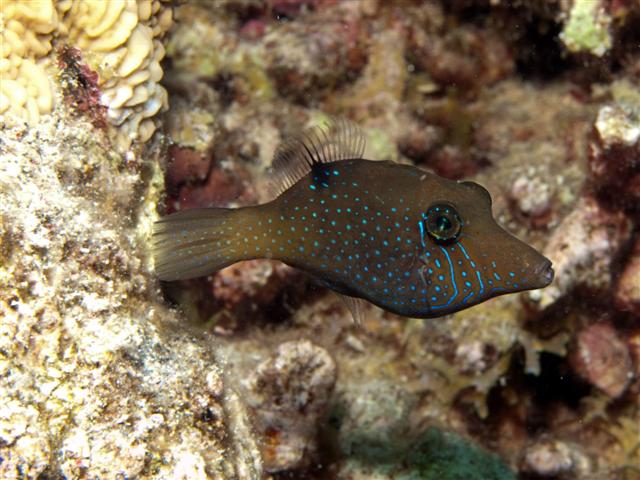 Another undescribed form exists in this genus, and it too can be found in the Red Sea. Unlike the previous species, this filefish has chosen to mimic a much smaller and more secretive species of pufferfish—the rarely seen Canthigaster pygmaea. Evidence for the existence of this Pygmy Mimic Filefish has been hiding in plain sight for quite some time, as a photo of this distinctive species already exists on fishbase, but, as is often the case, it was mistakenly identified as the pufferfish which it so convincingly mimics. To date, this is the only photographic documentation, but we’ll soon have a proper binomial for this little fish, as Luiz Rocha is in the process of describing it. 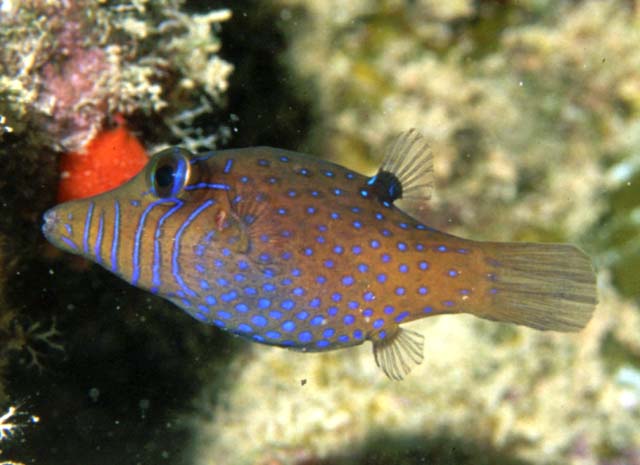 When we take a step back and ponder these four distinct Paraluteres, there seems to be an unusual evolutionary story which takes shape, with many questions and few answers. For instance, is the undescribed species present in the Andaman Sea a sister species to the nearly identical Red Sea P. arqat, or do they merely resemble one another? Alternatively, is it possible that P. arqat is a closer relative to the widespread P. prionurus (which, recall, is not found in the Red Sea). 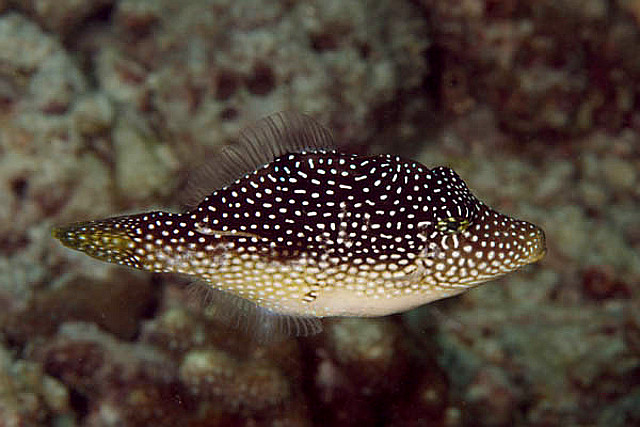 Perhaps at some point in the distant evolutionary history of this group there was a single ancestral filefish population spread throughout the Indo-Pacific which was forced, in the absence of Valentini Pufferfishes, to mimic a different species in the Red Sea, ultimately masking a closer relationship than their appearance would suggest. Or, if we follow Occam’s Razor, maybe there really are undiscovered populations which would geographically link the two disparate populations of spotted filefish mimics, and we’ve simply failed to notice them. Of course, this then begs the question of why there are no spotted filefishes mimicking the other Blue Spottted Pufferfishes in the Pacific Ocean—Canthigaster papua and C. solandri. Hopefully, with increased genetic and morphological study, answers will be forthcoming, as this fascinating group has the potential to offer us an extraordinary window into the causes and origins of mimicry in reef fishes.