Octopus are able to edit their RNA in reponse to the environment! 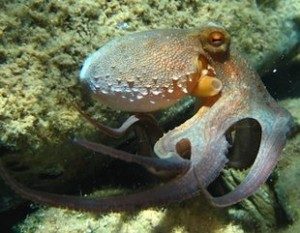 We all know octopuses are really cool, but new research has shown that the really cool octopuses are really cool indeed. Or, to put it more clearly, octopus that live at cold temperatures are able to alter their genetic material to allow them to adapt to this harsh environment. This process, called RNA editing is the first example of such genetic restructuring found in response specifically to environmental conditions.
So what is RNA editing and what does it do? Let’s take two octopus, living many miles apart in very different conditions. One (in the case of the study- Octopus vulgaris) hangs out in tropical lagoons around Puerto Rico and another (Pareledone species) lives in the frigid waters of Antartica. Now, both of these animals have a very similar set of genes, and the coding of those genes is almost identical. Examination of one gene in particular – which encodes a channel on nervous tissue- shows that the difference betwen the genes of the two animals is less than a percent. But here is the problem- If we were to take the warm water octopus and place in the very cold water, the speed at which signals travel in the nerves through this signal channel would slow to the point of causing major issues and a dysfunctional octopus. However, pareledone species live and functios quite readily in the cold depths. The reason for this is that while the basic genetic code of the two genes is the same, the protein being produced appears to be slightly different. The reason for this is RNA editing. What appears to be happening is that the cold water species of our multi-tentacled friends are able to change the way the RNA is read and decoded and thus alter the amino acid residues at certain points in the protein. By doing so, a slightly altered protein is created and, in this case, the new protein functions much better at lower temperature allowing better nerve conductance and a fully functional octopod. This research, performed by Joshua Rosenthal and Sandra Garret of the University of Puerto Rico, has deeper implications than allowing one gene to function in two wildly divergent places. Since the genetic code remains the same, but the products (proteins) can vary, it allows an animal to grade the amount of change. Cephalopods in very cold have extensive editing, those in warm, have little editing and those in the middle will edit some of the RNA, giving a blend of protein products. This allows for adaptive responses to changing environments. The authors also went on to show that this phenomenon is pretty common among the octopodes. The research paper itself is published in this month’s Science Express and can be accessed here.