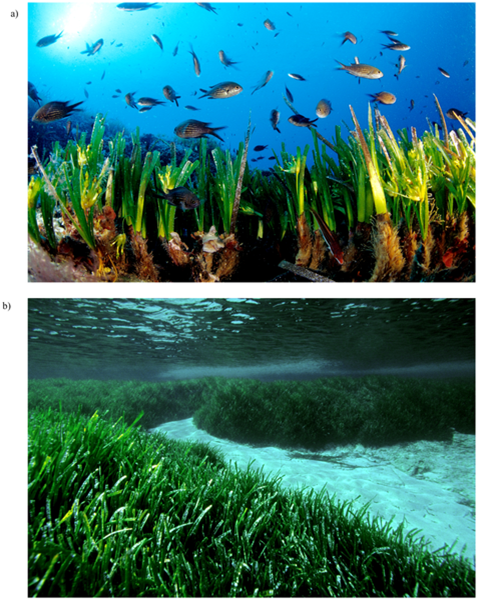 Meadows of the seagrass Posidonia oceanica in the Mediterranean. Photos by M. San Felix.

Some organisms are able to reproduce asexually through fragmentation. A familiar example is most corals which you can slice, dice, and fricassee and still grow into separate colonies. While this is a common mode of reproduction for many branching corals in nature, even mounding corals that are not as apt to be boken up into pieces can reproduce in this way, making fragmentation a viable option for captive propagation in almost all coral species. This type of growth is usually referred to as vegetative growth since many plants can be grown from cuttings whereas fragmentation of most animals (e.g., cats, dogs, fish) doesn’t go so well. Hence, corals are somewhat unusual among animals in that they can reproduce vegetatively.

Some organisms not only can reproduce vegetatively, they make a habit of it. In particular, seagrasses reproduce sexually by flowering and they send out runners from which they grow more and more seagrass shoots. Colonial corals, which includes most species, function in the same way–each polyp in a colony is simply a clone of its parent polyp.

As an organism grows its cells themselves grow larger until they get large enough to divide, then grow again and divide again, etc. Each time a cell divides it must first copy its DNA, so that each new cell will have a copy. When DNA is copied most of the information is copied correctly, but occasionally errors are made, called mutations. In most organisms only a small portion of the DNA is actually important to the organism whereas most of it is simply junk. Mutations in junk DNA are irrelevant to the organism, just like a spelling error in SPAM email would be irrelevant to us. However, mutations in the bits of DNA that an organism does need (genes, promoters, etc.) can alter their function. The consequences depend on the specific mutation: the effects are in rare instances positive, sometimes neutral,  and most often negative. The larger an organism grows the larger the number of times its cells must divide and the more negative mutations will accumulate, however, different species have different capacities to repair their DNA to correct for mutations.

Researchers recently set out to examine the limits of clonal, vegetative growth by studying the Mediterranean seagrass Posidonea oceanica. They sampled patches of seagrass at spatial scales of a few feet in 40 different locations across the Mediterranean and used DNA markers called microsatellites to determine which seagrass shoots were distinct individuals and which were clones. Staggeringly, the largest clones that they found covered areas more than 9 miles across. Based on the spreading rates of these meadows they were able to estimate a minimum age for the individuals that gave rise to these giant clonal patches. Many clones were estimated to be on the order of tens of thousands of years old with the individual that made the largest patch estimated to be at least 80,000-200,000 years old, making these clones of P. oceanica among the oldest known organisms in the world. Despite these incredibly old ages and incredibly large sizes little evidence of accumulated mutations was found within the microsatellite markers used in the study (themselves only a tiny, tiny portion of the genome), suggesting that P. oceanica must have very active DNA repair mechanisms which help allow it to keep negative mutations a bay and reach such large sizes and old ages.