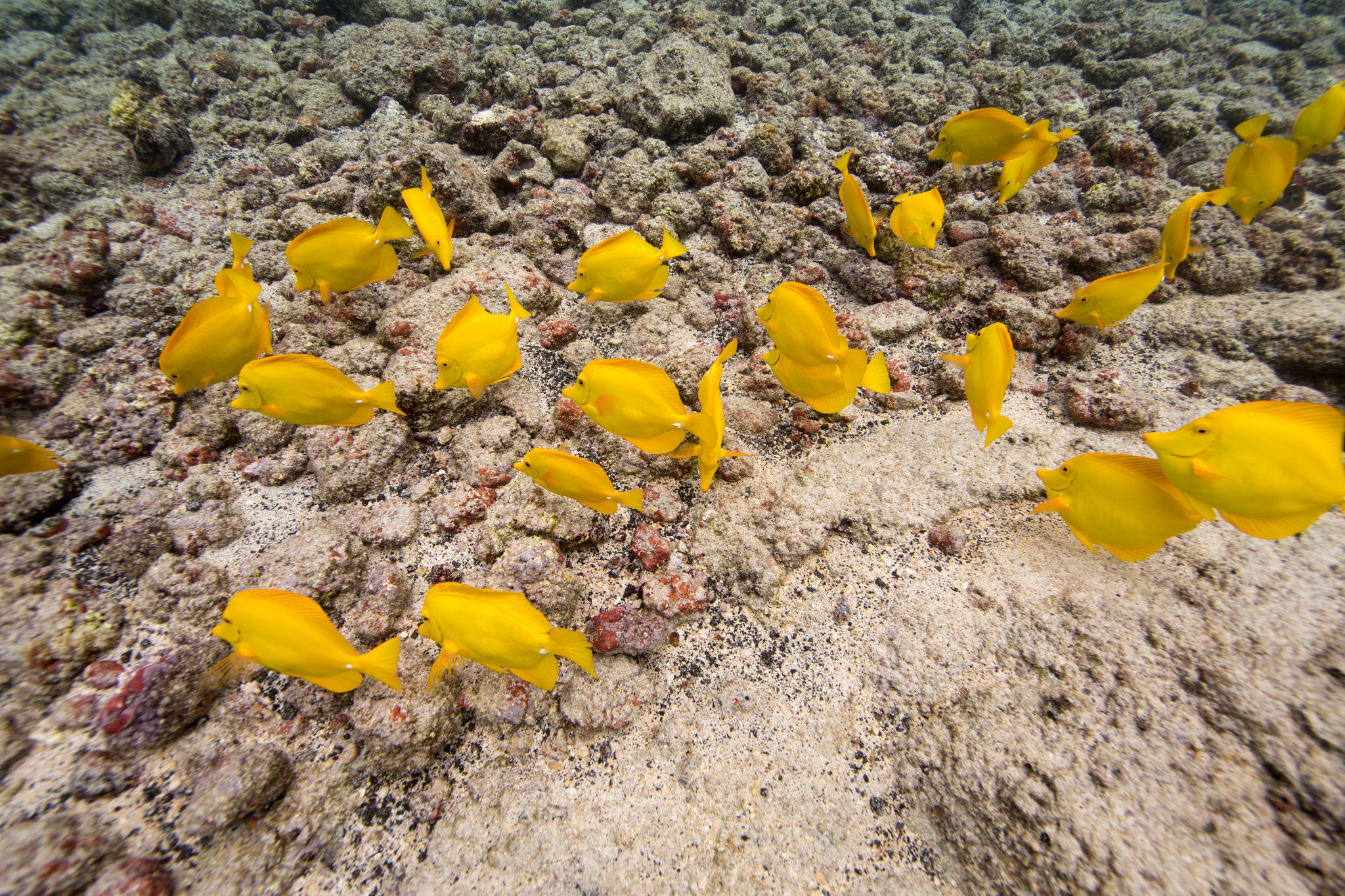 The Scopas Tang is an ugly little fish with a fascinating story to tell. This fecal-hued acanthurid is by far the most widespread member of its small genus, with a population stretching from the African coast to the furthest islands of Polynesia. But, in contrast to so many other widely distributed fishes, there is little in the way of morphological or phenotypic variation across this vast expanse to suggest the presence of any regionally distinct populations or “species”. An African Scopas Tang, it would seem, is just as good as a Tahitian or Japanese Scopas Tang… but there is one notable exception.

Hawaii’s famous Yellow Tangs (Zebrasoma flavescens) are, more or less, a xanthic variety of Z. scopas, and researchers have differed in their opinions as to whether these should in fact be treated as a single heterogeneous species. But elsewhere in the Pacific, the picture quickly gets muddied. The Yellow Tang is also the predominate member of this group in the Mariana Arc, but here you’ll also see the occasional Scopas Tang living alongside it. In Japan and the Northern Philippines, the true Yellow Tang gets increasingly less common, with apparent hybrids (recognized by their intermediate yellow-brown coloration) being much more likely, and this holds true for the other areas of biogeographic overlap, like the Caroline and Marshal Islands in Micronesia. For instance, at Ulithi—equidistant between Guam and Palau—the ratio of scopas to flavescens to hybrids is roughly 91:6:3.

Aside from the bright coloration of the Yellow Tang, little else in the way of morphology serves to reliably separate these two sister species, but, despite their stark visual differences, research into the genetics of these fishes has until now failed to find any strong evidence of their distinctiveness. But surely these two fishes have to be different at a genetic level, or else from whence comes their observable phenotypic differences?

A new study appearing in the journal Ecology and Evolution has finally shed some light on the situation. Led by geneticist Dr. Giacomo Bernardi, researchers sampled populations across the Pacific and applied next-gen sequencing techniques to maximize the amount of data that could be analyzed. Whereas prior studies had looked at just a single mitochondrial gene (CO1, the “DNA barcode”), this new study examined discrepancies across the nuclear genome, finding more that 5000 polymorphisms (i.e. areas where the DNA was variable between specimens).

But comparing these 5000+ differences failed to find any correlation relative to the biogeography of this group. These data, taken as a whole, would seem to indicate that there is really just one species across the Pacific Ocean, variable in its coloration. But these researchers went a step further and compared a subset of the polymorphisms that were most closely associated with differences in biogeography. These “outlier loci” are the portions of the genome which might be expected to represent the areas that are most strongly undergoing natural selection, and, thus, they are likely the most informative when it comes to diagnosing species and populations. As the authors put it, these are the “genomic islands of divergence”.

Instead of a single widespread species, this refined dataset pointed towards a more diverse explanation. Yellow Tangs in Hawaii and Scopas Tangs in French Polynesia showed little indication of admixture; these would seem to be representative of two distinct species. Specimens from the “hybrid zone” of these two species, sampled at Okinawa and Ulithi, found that hybrid specimens possessed a variable mix of polymorphisms associated with both parent taxa, precisely what we would expect. 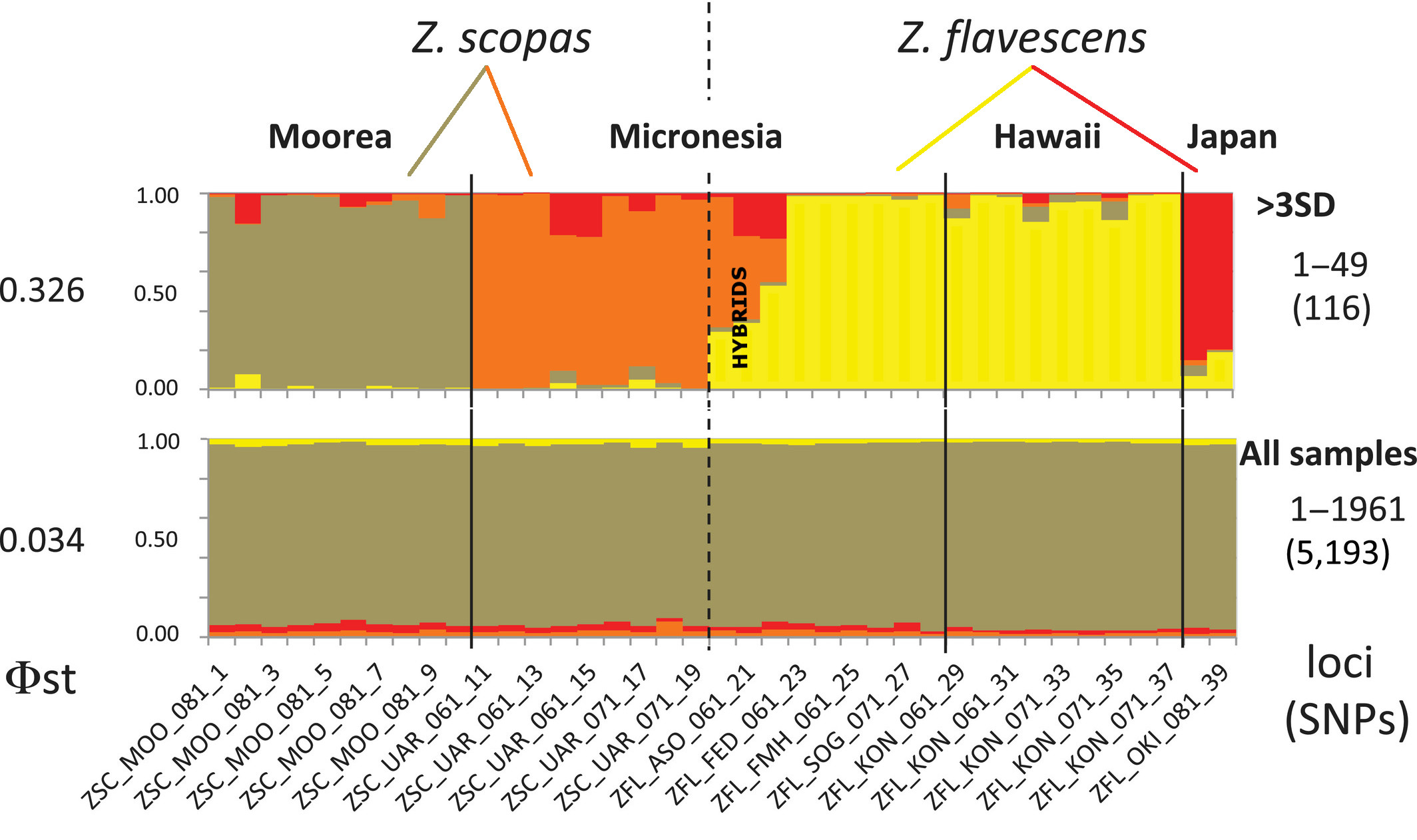 “Genomic Islands” in the top row compared to the full dataset of polymorphisms in the bottom. Note the distinctiveness of each geographic location and the 3 hybrids from Ulithi (Micronesia). Each column is a single specimen. Modified from Bernardi et al. 2018

But the most interesting finding of this study, and, oddly, one which the authors barely make mention of, is the relative distinctiveness of different populations within these species. For instance, the Japanese and Hawaiian Yellow Tangs were seemingly as distinct from one another in these “genomic islands” as they are to Z. scopas. And, for the Scopas Tang, those from Polynesia and Micronesia are similarly non-overlapping at these outlier loci. This paints a very different picture, one in which the Indo-Pacific is finely divided into allopatric populations which are largely isolated from one another.

This is a familiar pattern among coral reef fishes, and, for many groups, it has resulted in extensive speciation. We see this among Cirrhilabrus fairy wrasses and Pseudojuloides pencil wrasses, and there are unrecognized examples of this phenomenon among Dascyllus damselfishes and Amphiprion anemonefishes, but it’s surprising to see evidence of it, however slight, among a group like the Zebrasoma Tangs. In general, surgeonfishes have the sort of prolonged larval stage that one might expect to limit this sort of regional speciation, but perhaps this genus is an exception to the rule? Consider the distribution of the congeners here, with the closely related Purple Tang Z. xanthurum and the Gem Tang Z. gemmatum restricted to the Western Indian Ocean and the Black Tang Z. rostratum in Polynesia, and we can certainly find reason to believe that this group is prone to this same sort of allopatric diversification.

The real question remaining to be answered is how many of these recognizable populations are there for the scopas-flavescens complex, and do these warrant consideration as separate “species”? Should a Yellow Tang from Okinawa be considered the same species as one from Hawaii when their distant biogeography and distinct “outlier loci” suggest they have little to do with one another?

And what about all the farflung populations of Z. scopas? Those from Polynesia and Micronesia seem different in this regard, but no doubt those from the Indian Ocean are even moreso. The Bernardi study excluded them from their analysis based on what seems like a faulty hypothesis, positing that existing CO1 data places this population as a cryptic species more closely related to the other Indian Ocean taxa. This, however, seems nonsensical and is argued against by data not included in their study.

Ultimately, what are we to do with this knowledge. Is it appropriate to consider all of the heterogenous scopas and flavescens populations as diverse members of two distinct species (or even *gasp* just one phenotypically variable one). Or would it be better to reflect all of this cryptic diversity by recognizing each discrete population as its own geographically isolated species, but then what of the areas of overlap?! This is the messy grey area of evolution, where neat and tidy boundaries breakdown into a confused taxonomic morass. 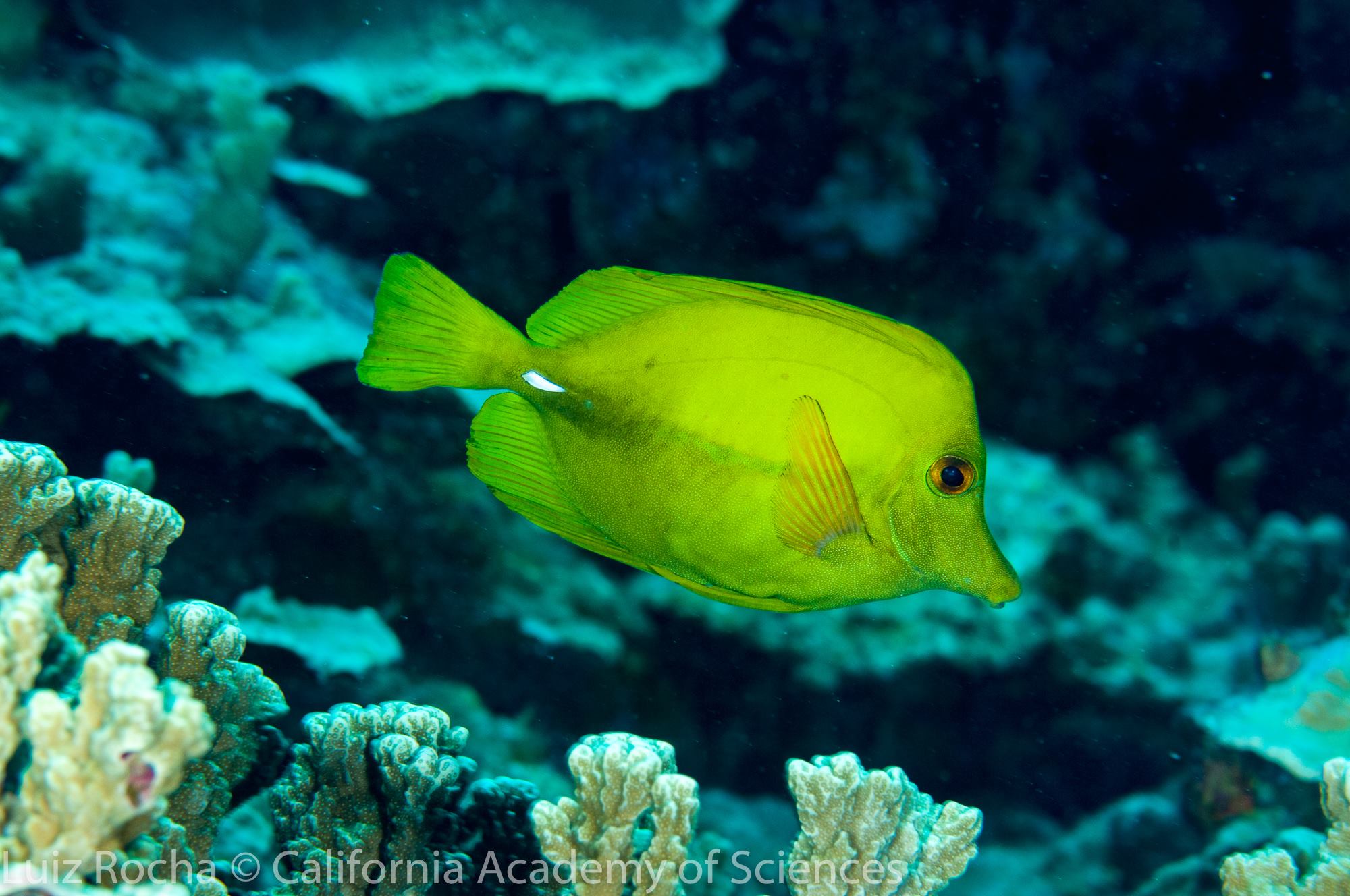 An informative (and no doubt controversial) comparison might be made with our own complicated species. Homo sapiens shows plenty of minor regional differences, be it the sickle cell gene of Africans or the oxygen tolerance of Tibetans, and this is manifested phenotypically in the many population-level traits found across humanity. Perhaps the yellow coloration of Hawaii’s Tangs is of no more significance than the blonde hair of a Norwegian. No species is ever truly homogenous, and it’s important not to lose sight of the relative scale of these differences. But where we draw the lines for speciation amongst coral reef fishes of the Indo-Pacific is still an imperfect science.

Anyways, I promised you a White Tang in the title, so here’s one recently spotted at the southern tip of Maui. 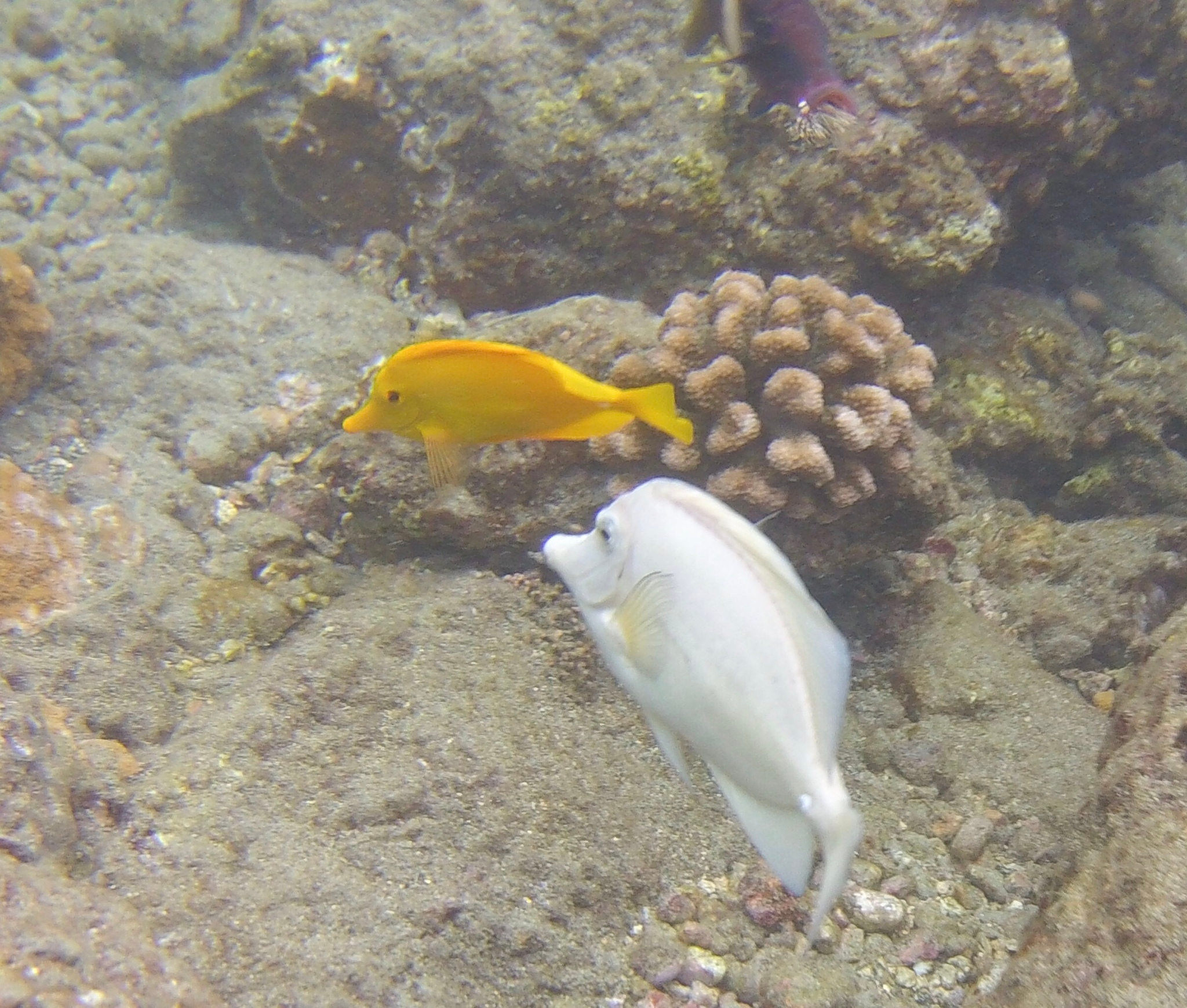