The jawfish family has grown a bit more diverse with the description of a new species, Opistognathus ensiferus, discovered off the southeastern coast of India. This small fish, known from just a single male specimen measuring 61mm, is a bit innocuous at first glance, but, if it’s anything like its sister species, O. solorensis, this may turn out to be a gorgeous find.

The most noteworthy trait that these two species share (along with another obscure species, O. verecundus from Northern Australia) is an unusual modification to the upper jaw (=maxilla). In these taxa, this bone reaches its widest dimension roughly in the middle and then narrows towards the rear. The end result is a shape somewhat like the scimitar sword of the Middle East, and this gives rise to the species’ epithet, which translates form Latin as “sword-bearing”. 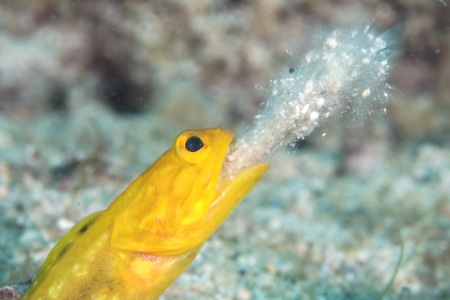 In the West Pacific, the widespread O. solorensis is a commonly observed fish that has much in common with this new species. Both have similar reticulated patterns along their sides and a prominent spot in the dorsal fin. The differences between the two are fairly inconspicuous and relate to the colors found within the mouth—recall that jawfish open their mouths widely in territorial displays, showing off these colors—as well as a proportionally longer lateral line.

Unfortunately, we only have the single specimen of this new jawfish, and there are no live photographs yet documented. To get an idea of what it might resemble in life, we can take a look at its Pacific sibling. One of the most remarkable aspects of O. solorensis is the beautiful xanthic variation that seems to occur with some regularity. Japanese divers have recorded this beautiful creature in exquisite detail, and the video above gives an idea for just how eye-catching it is. With a distribution that encompasses the main aquarium collecting localities, it’s quite likely that this species has sporadically been exported, though I’ve yet to find evidence for this. As far as Indo-Pacific jawfishes go, there aren’t many that can compete with the sulfurous splendour of O. solorensis; whether the newly described O. ensiferus is similarly colored remains to be seen.