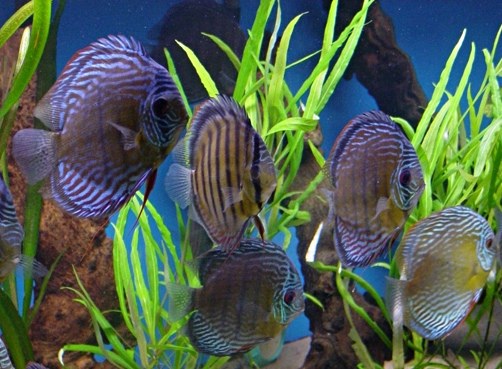 Antibiotics to fight bacterial diseases in fish are becoming less effective as time goes on.


From the University of Oregon:

The $15 billion ornamental fish industry faces a global problem with antibiotic resistance, a new study concludes, raising concern that treatments for fish diseases may not work when needed — and creating yet another mechanism for exposing humans to antibiotic-resistant bacteria. The risk to humans is probably minor unless they frequently work with fish or have compromised immune systems, researchers said, although transmission of disease from tropical fish has been shown to occur. More serious is the risk to this industry, which has grown significantly in recent years, and is now a $900 million annual business in the United States.

There are few regulations in the U.S. or elsewhere about treating ornamental fish with antibiotics, experts say. Antibiotics are used routinely, such as when fish are facing stress due to transport, whether or not they have shown any sign of disease.

“We expected to find some antibiotic resistance, but it was surprising to find such high levels, including resistance in some cases where the antibiotic is rarely used,” said Tim Miller-Morgan, a veterinary aquatics specialist with Oregon State University. “We appear to already have set ourselves up for some pretty serious problems within the industry.”

In the new study, 32 freshwater fish of various species were tested for resistance to nine different antibiotics, and some resistance was found to every antibiotic. The highest level of resistance, 77 percent, was found with the common antibiotic tetracycline. The fish were tested in Portland, Ore., after being transported from Colombia, Singapore and Florida.

Findings of the study were reported in the Journal of Fish Diseases.

The bacterial infections found in the fish included Aeromonas, Pseudomonas, Staphylococcus and others, several of which can infect both fish and humans.

“The range of resistance is often quite disturbing,” the scientists wrote in their report. “It is not uncommon to see resistance to a wide range of antibiotic classes, including beta-lactams, macrolides, tetracyclines, sulphonamides, quinolones, cephalosporins and chloramphenicol.”

Problems and concerns with antibiotic resistance have been growing for years, Miller-Morgan said. The nature of the resistance can range widely, causing an antibiotic to lose some, or all of its effectiveness.

There have been documented cases of disease transmission from fish to humans, he said, but it’s not common. It would be a particular concern for anyone with a weak or compromised immune system, he pointed out, and people with such health issues should discuss tropical fish management with their physician. Workers who constantly handle tropical fish may also face a higher level of risk.

From an industry perspective, losses of fish to bacterial disease may become increasingly severe, he said, because antibiotics will lose their effectiveness.

Anyone handling tropical fish can use some basic precautions that should help, Miller-Morgan said. Consumers should buy only healthy fish; avoid cleaning tanks with open cuts or sores on their hands; use gloves; immediately remove sick fish from tanks; consider quarantining all new fish in a separate tank for 30 days; wash hands after working with fish; and never use antibiotics in a fish tank unless actually treating a known fish disease caused by bacteria.

“We don’t think individuals should ever use antibiotics in a random, preventive or prophylactic method,” Miller-Morgan said. “Even hobbyists can learn more about how to identify tropical fish parasites and diseases, and use antibiotics only if a bacterial disease is diagnosed.”

On an industry level, he said, considerable progress could be made with improvements in fish husbandry, better screening and handling, and use of quarantines, rather than antibiotics, to reduce fish disease.

Also increasing is the number of trained fish veterinarians, who can help fish hobbyists to reduce disease loss and save treasured pets. More information is available from the World Aquatic Veterinary Medical Association and the American Association of Fish Veterinarians. A database of aquatic veterinarians is available online, at http://aquavetmed.info