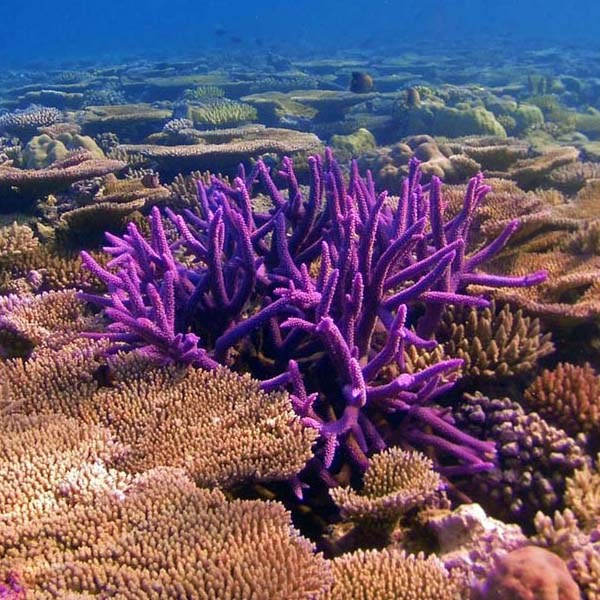 
Dr George Roff and Professor Peter Mumby from the ARC Centre of Excellence for Coral Reef Studies and The University of Queensland told the 12th International Coral Reef Symposium in Cairns that coral reefs in the Indo-Pacific Ocean are naturally tougher than the Caribbean reefs.

“The main reason that Indo-Pacific reefs are more resilient is they have less seaweed than the Caribbean Sea,” Dr Roff says. “Seaweed and corals are age-old competitors in the battle for space. When seaweed growth rates are lower, such as the Indo-Pacific region, the reefs recover faster from setbacks. This provides coral with a competitive advantage over seaweed, and our study suggests that these reefs would have to be heavily degraded for seaweeds to take over.

“This doesn’t mean that we can be complacent – reefs around the world are still heavily threatened by climate change and human activities,” he says. “What it indicates is Indo-Pacific reefs will respond better to protection, and steps we take to keep them healthy have a better chance of succeeding.”

“Many of the doom and gloom stories have emanated from the Caribbean, which has deteriorated rapidly in the last 30 years,” says Professor Mumby. “We now appreciate that the Indo-Pacific and Caribbean are far more different than we thought.”

The study, published in the journal Trends in Ecology and Evolution (TREE), includes survey data Indo-Pacific region and Caribbean reefs from 1965 to 2010.

The researchers also found that seaweeds in Indo-Pacific region bloom four times more slowly than those in the Caribbean.

“We’re not sure why this happens, but a plausible theory is that Caribbean waters are highly enriched in iron,” they say. “For thousands of years, the Caribbean Sea has received dusts that blow across the Atlantic from the Sahara, and the dust contains iron – an essential element for algae to grow.

“This suggests that the difference between the Indo-Pacific and Caribbean oceans and their coral reefs is fundamental, and occurs at a very large scale.

“Another factor that protects these reefs is the abundance of herbivorous fish, such as surgeon and parrotfish that treat seaweed as a delicacy. The Indo-Pacific region has a lot of these fishes.

“For instance, the Indo-Pacific region has 70 species and six genera of parrotfish, while the Caribbean only has 13 species and two genera of the fish.”

While the findings indicate a brighter future for the Indo-Pacific reefs, nations such as Australia will need to maintain vigilant protection of the ocean, the researchers warn.

“All reefs face an uncertain future, particularly in places with lots of human activities,” they say. “We still need to curb the overfishing of herbivorous fish, as they are very sought after in the Pacific. We also need to control the level of nutrients in the water and prevent runoff when necessary.

“The good news is that our Indo-Pacific reefs are tougher than we thought – we just need to make sure that our actions won’t destroy their natural resilience.”

The researchers will be presenting their paper “Global disparity in the resilience of coral reefs” at 10.15am, Thursday 12 July 2012 in Cairns Convention Centre (Hall D).