Pacific Sun’s Cube Bridges the Gap Between Bluetooth and WiFi 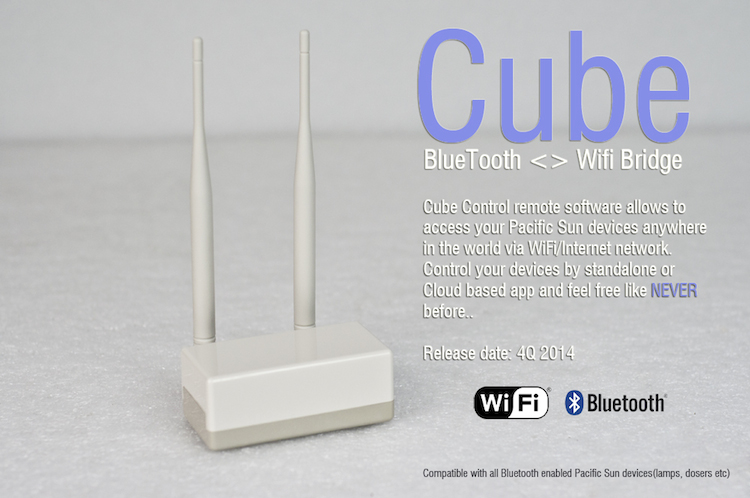 For the longest time, Bluetooth technology was one of those highly touted bullet point features of multiple aquarium products offered from lots of different brands. It was supposed to revolutionize how hobbyists communicated with their aquarium equipment. The devices could be controlled wirelessly by all sorts of Bluetooth enabled devices, but due to its severely limited range, it was quickly overtaken by WiFi, which offered worldwide functionality via the internet. Thankfully, those Bluetooth products aren’t in any way obsolete thanks to a new device from Pacific Sun. Called the Cube, this simple little device acts as a bridge between Bluetooth and WiFi signals, allowing formerly Bluetooth only devices to connect to a wireless network and receive work direction from any place in the world.The Pacific Sun Cube will be available in 4Q 2014, which is less than a month away, and it will be compatible with all of their existing products like the LED/Hybrid fixture, T5HO fixtures, dosers, etc. A mobil and computer based app will accompany the release of the Cube, and all of the data will live in the cloud, another ever growing feature of the aquarium industry.Pricing will be announced upon the Cube’s release. In the meantime, check out these screen captures of the software. This entry was posted in Aquarium Equipment and tagged Aquarium Equipment, pacific sun, Pacific Sun Cube by Brandon Klaus. Bookmark the permalink. MORE: Pacific Sun’s Cube Bridges the Gap Between Bluetooth and WiFi