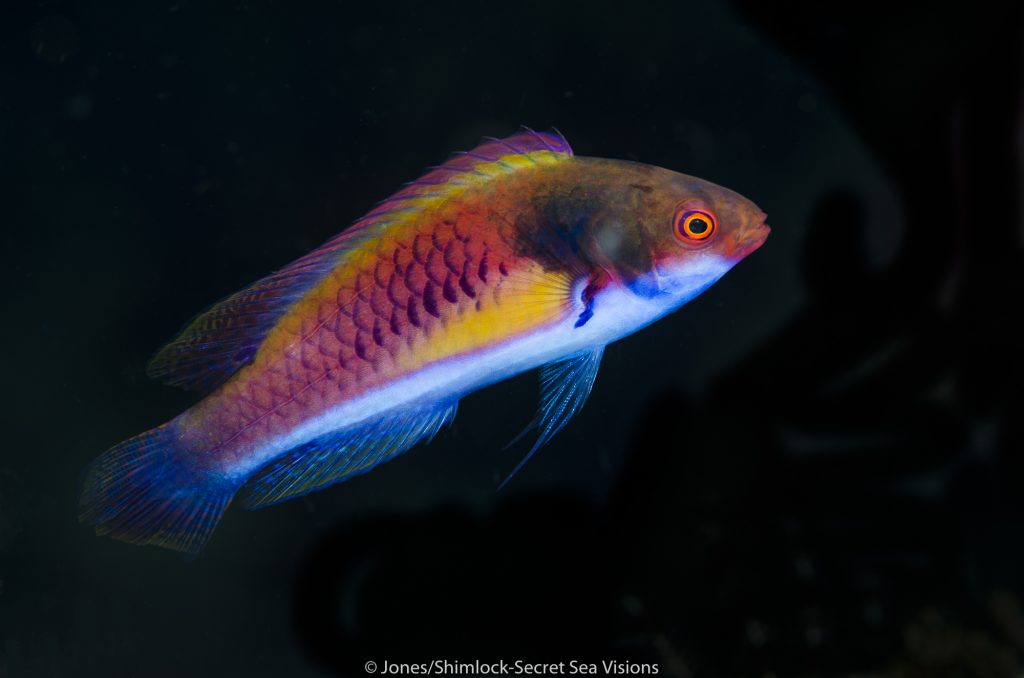 We’re living in a golden age of fairy wrasse discoveries. In the past few years, we’ve seen the scientific description of several new species—C. isosceles, C. efatensis, C. africanus & C. rubeus. And there are still many more waiting to be studied and named, like the Indonesian variant of C. lubbocki or the Fijian C. cf punctatus. But certainly the most exciting development has been the recent discovery of several fishes that were entirely unknown. The soon-to-be-described Magma Wrasse is a prime example of this, as is the mysterious and elusive Ogasawara Wrasse, both of which are restricted to deeper waters.

The fish I’ll be discussing today falls plainly into this third camp. You won’t find it in any field guide, and, to date, images of it are exceedingly scarce. Yet, despite its apparent rarity, this species is expected to be quite abundant and relatively easy to encounter in the wild. The group to which it belongs is one that is typically found in relatively shallow waters and generally in association with coral-rich habitats. In fact, you’ll often see these wrasses swimming alongside the ubiquitous Lyretail Anthias (Pseudanthias squamipinnis) and Purple Queen Anthias (Pseudanthias tuka). So how do we explain its continued obscurity?

It really comes down to how similar this fish is to some of the others in its complex. The color patterns involved are rather painterly and oftentimes highly variable. Making matters worse, there is a considerable amount of phenotypic overlap (and probably hybridization) between them, particularly for those found in the eastern portions of Indonesia. The end result is that these fishes are unusually challenging to accurately identify, and, as they are somewhat duller aesthetically than other fairy wrasses, these seem to get ignored by most divers, aquarists, and researchers. 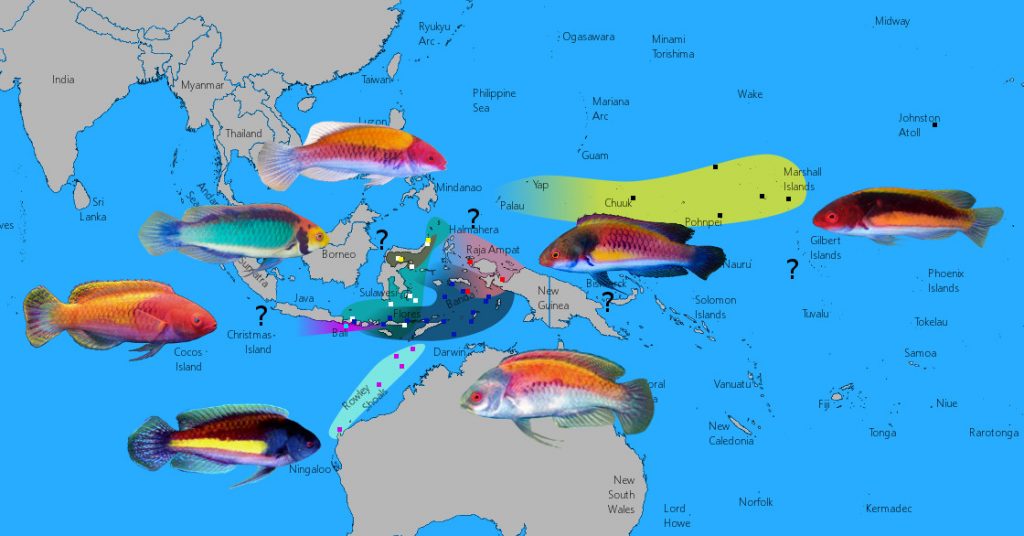 The best documented member of this species group is the undescribed population found around the Lesser Sunda Islands, at places like Komodo, Alor and Ambon. You’ll see this labeled as the Banda Wrasse or the Greyhead Wrasse, and there’s also a similar (but arguably distinct) fish collected from the nearby Timor Sea that has recently been entering the aquarium trade as the Darwin Glow Wrasse. The tricky thing with this fish is that it’s fairly inconsistent in its appearance, and oftentimes the best way to identify it is by virtue of the fact that it isn’t recognizable as belonging to any of the described species: C. aurantidorsalis, C. randalli, C. luteovittatus, C. solorensis.

And the same can be said for the fish highlighted here. Thus far, it has only been documented from around West Papua, with observations at Raja Ampat, Cenderawasih Bay, and the Banda Islands. This small geographic region has proven to be a hotbed for endemic speciation—relevant examples include Paracheilinus waltoni & P. nursalim, Pictichromis caitlinae, the Hemiscyllium sharks, and the Chrysiptera oxycephala damselfish complex—so it’s certainly no great surprise to find a unique Cirrhilabrus swimming around these reefs. 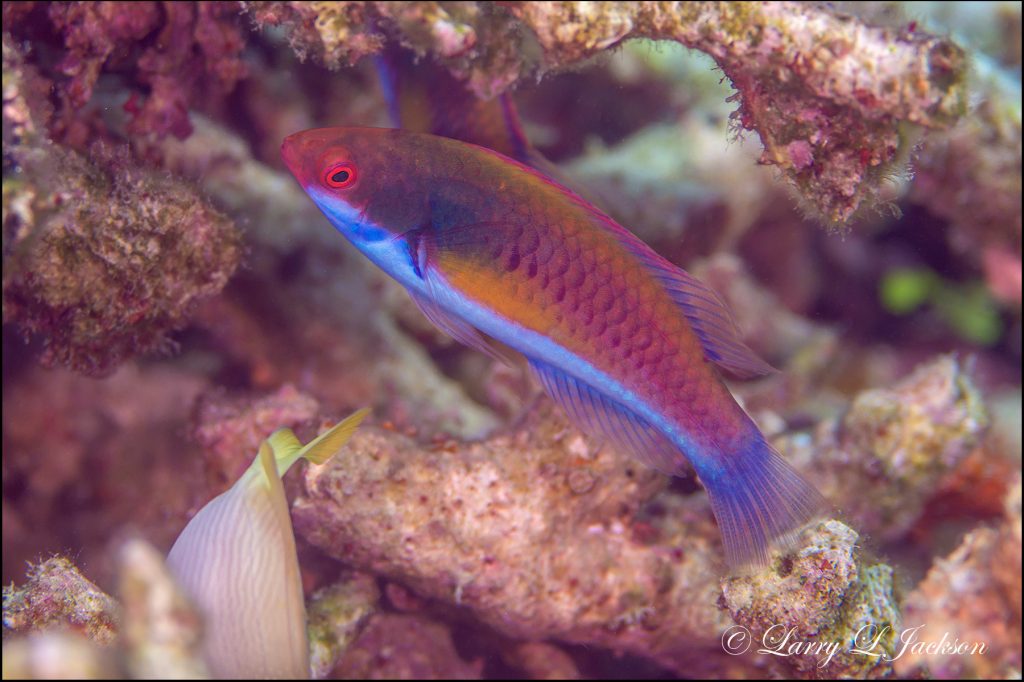 The most outstanding feature to look for is the splash of yellow found along the sides of this fish. This is a recurring theme among this particular lineage of fairy wrasses, as we see variations of it in C. randalli from Northwestern Australia, in C. luteovittatus from Micronesia, and even in C. ryukyuensis in the Philippines. This latter example is believed to belong to a sister lineage of the solorensis complex, indicating that the yellow pectoral marking may have a fairly distant evolutionary origin. Naturally, Indonesian specimens with yellow along the sides have sometimes been mistaken for C. ryukyuensis, despite that species having never been definitively documented south of the Philippines.

Unfortunately, we know little else about this presumed new species. How variable is its color pattern, especially given the multitudinous nature of its presumed sister species, the Banda Wrasse. And what is the true extent of its range—might it also occur at Halmahera or Palau or further west into the Moluccas? And what about the eastern portions of New Guinea, where there has, oddly enough, yet to be a member of this lineage reported? For now, it’d be helpful to have a common name associated with this fish, so I’ll go ahead and christen it as the Papuan Fairy Wrasse. Out of the dozens of Cirrhilabrus species, this may prove to be the only one endemic to the reefs around West Papua. 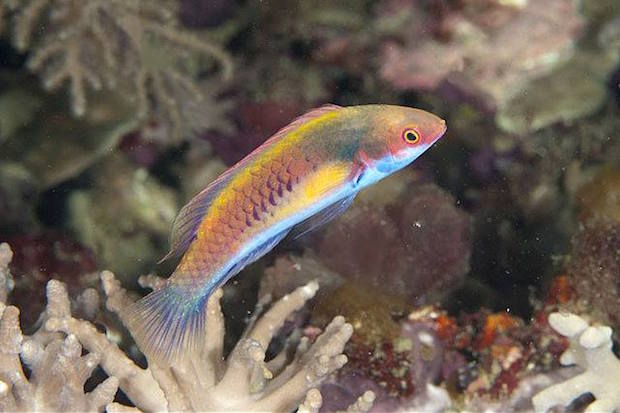