Parenting comes at a price for male cardinalfish 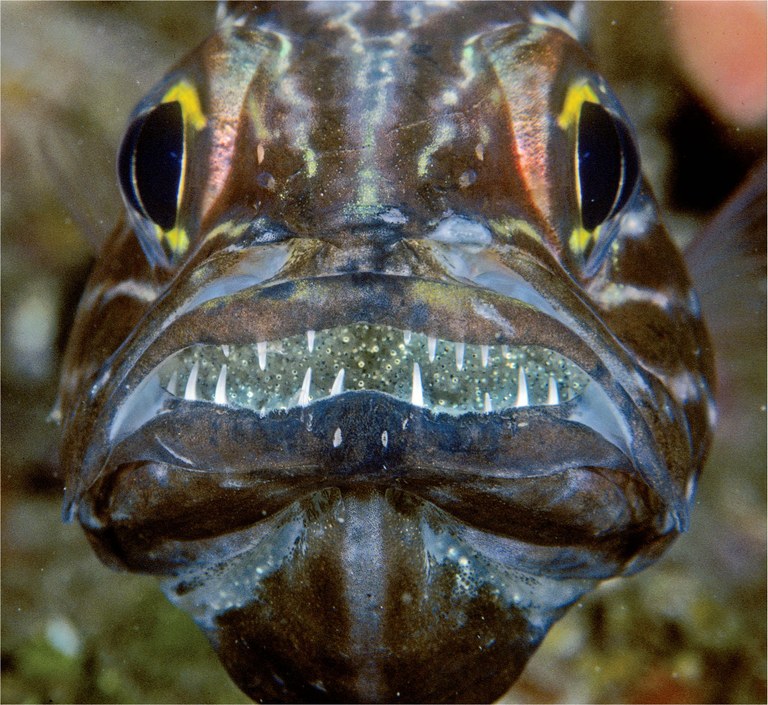 Small eyes look out from the safety of a parent’s mouth: but do cardinalfishes pay the price for good parenting? A male brooding Cheilodipterus sp. Photo: Rudie Kuiter.

A survival strategy that has been a triumphant success for cardinalfishes for going on 50 million years could come unstuck under rapid global warming, scientists from the ARC Centre of Excellence for Coral Reef Studies and James Cook University have found.

“We studied how cardinalfishes have evolved over millions of years and found that these mouthbrooders haven’t changed much – their jaw cavities have become larger for keeping more young in their mouths, and their colours are different, but that’s about it,” explains Professor David Bellwood, a researcher in the study.

“While other fishes have evolved by changing shape and broadening their diet, the mouthbrooding fishes remain simple feeders that eat mainly plankton. This can be bad news when food is scarce.”

With a lifespan of about two years, cardinalfishes breed several times a year, mostly in summer. Instead of laying thousands of eggs in a batch like other fishes, they lay hundreds of slightly larger eggs. When the female releases the eggs, the male gathers them into a tight bundle which he keeps safe in his mouth for a couple of weeks until the young hatch and become free-swimming.

“These eggs occupy up to 100% of the oral cavity, and the dad’s mouth would expand and look like a large bubble,” says Dr Andrew Hoey, who conducted the study. “It’s a wonder that they can even breathe. They don’t feed, but live on stored energy, and stay sedentary in and around corals.

“The females play the role of jealous wives. They stay close to the males, not to help rear the kids, but to prevent other females from swimming off with such a desirable mate. Our guess is these stay-at-home dads are very much in demand.”

Although the 50 million-year-old breeding technique has proved successful so far, providing large and happy families for cardinalfishes, their future is looking grim, Prof. Bellwood says.

“Apart from being left behind in terms of evolution, mouthbrooding makes them more vulnerable to the effects of climate change.
“As ocean temperatures warm, these fish will need to breathe more – and the last thing they need is having a mouthful of offspring when they need oxygen.”

The other problem is the increasing lack of shelter as corals around the world die from bleaching and disease: cardinalfishes are popular prey for larger predatory fish like coral trout.

“These fishes are very attached to their homes – they like to stay under branching corals, and will come back to the same little patch day after day.”

However, branching corals are one of the most vulnerable types to climate change, he says. If corals perish as a result of bleaching or diseases, the cardinalfishes will be exposed and vulnerable.

“When the coral cover declines, they’re going to be homeless, just sitting there with babies in their mouths and struggling to breathe. Their problems will be exacerbated by a shortage of food because of their narrow diets.”

“In short, these stay-at-home dads have sacrificed job options, and even their lives, to provide top notch parental care for their young – just imagine how life would be like if you had a toddler hanging from your teeth.”

“This has proved a highly successful survival strategy for 50 million years – but under rapid global warming, there is a big risk it could come unstuck. This is another example of the profound impact which humans are having on life on Planet Earth.”

Their paper “To feed or to breed: morphological constraints of mouthbrooding in coral reef cardinalfishes”, by Andrew S. Hoey, David R. Bellwood and Adam Barnett appears in the journal Proceedings of the Royal Society B.