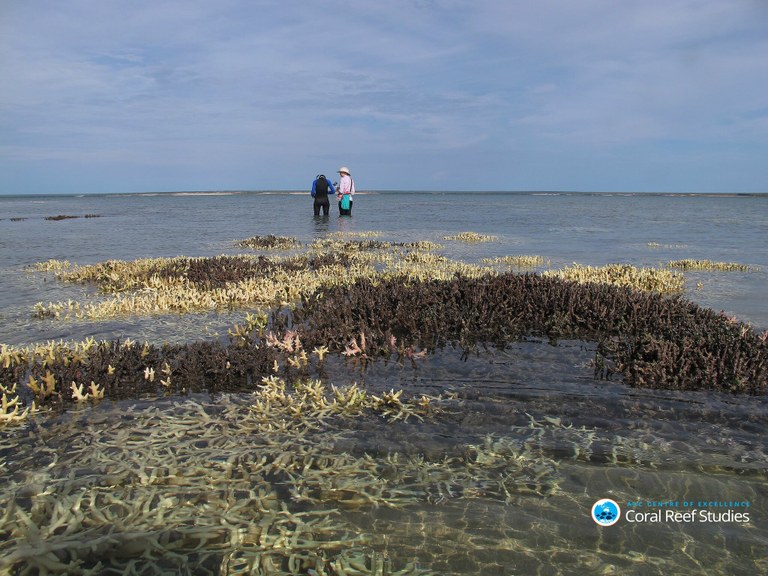 Coral reef scientists estimate that mass bleaching has killed 35% of corals on the northern and central Great Barrier Reef.

After months of intensive aerial and underwater surveys, researchers from the ARC Centre of Excellence for Coral Reef Studies have released an initial estimate of the death toll from coral bleaching.

The impact, which is still unfolding, changes dramatically from north to south along the 2300km length of the Reef.

“We found on average, that 35% of the corals are now dead or dying on 84 reefs that we surveyed along the northern and central sections of the Great Barrier Reef, between Townsville and Papua New Guinea,” says Professor Terry Hughes, Director of the ARC Centre of Excellence for Coral Reef Studies at James Cook University (JCU).

“Some reefs are in much better shape, especially from Cairns southwards, where the average mortality is estimated at only 5%.

“This year is the third time in 18 years that the Great Barrier Reef has experienced mass bleaching due to global warming, and the current event is much more extreme than we’ve measured before.

“These three events have all occurred while global temperatures have risen by just 1 degree C above the pre-industrial period.

The loss of these algae causes the corals to turn white, and ‘bleach’.

Bleached corals can recover if the temperature drops and zooxanthellae are able to recolonise them, otherwise the coral may die.

“Fortunately, on reefs south of Cairns, our underwater surveys are also revealing that more than 95% of the corals have survived, and we expect these more mildly bleached corals to regain their normal colour over the next few months,” says Dr. Mia Hoogenboom, also from JCU.

Although substantially fewer corals have died to the south, the stress from bleaching is likely to temporarily slow down their reproduction and growth rates.

According to the scientists, the reefs further south have escaped damage because water temperatures there, were closer to the normal summer conditions.

“It is critically important now to bolster the resilience of the Reef, and to maximise its natural capacity to recover,” says Professor John Pandolfi from the ARC Centre of Excellence for Coral Reef Studies at The University of Queensland.

“But the reef is no longer as resilient as it once was, and it’s struggling to cope with three bleaching events in just 18 years.

“Many coastal reefs in particular are now severely degraded,” he said.

“On the Kimberley coast where I work, up to 80% of the corals are severely bleached, and at least 15% have died already.

The researchers plan to re-visit the same reefs over coming months to measure the final loss of corals from bleaching.

The recovery of coral cover is expected to take a decade or longer, but it will take much longer to regain the largest and oldest corals that have died.