Pay it forward: Mentor a youth, Ensure the future of the hobby 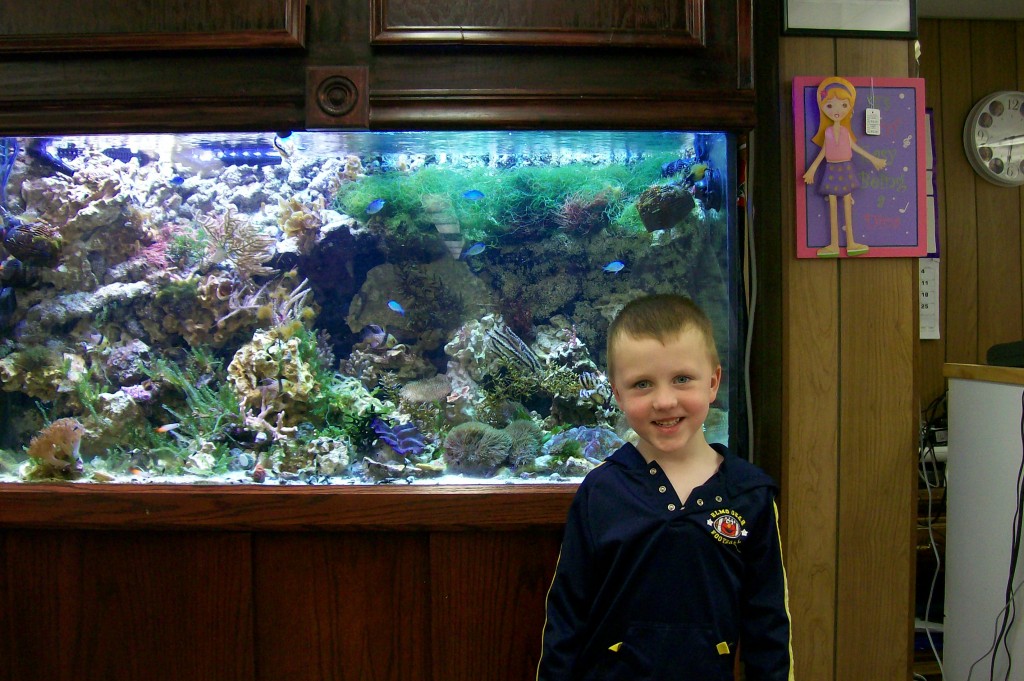 5 year old standing in front of the 90 gallon macro tank on display in the children's clothing store I own with my wife.

How did your passion for fish keeping begin? For me it was the gift of a 10 gallon aquarium and a few pairs of Guppies when I was a spry 7 year old. The present was given to me by my 1st grade teacher. I can not remember what the first grade project concerning the tank and fish was, I definitely will never forget the fascination I had with the little fish that seemed to have a new batch of fry daily. From that year on a day hasn’t passed that the passion for the hobby has ever dimmed. All through my youth, into my adulthood a fish tank has been as much a fixture in my home as a t.v. is in most houses across the nation and I’m never truly happy unless I am working on a new tank build, enjoying existing builds or just talking tanks with other hobbyists.

When I ventured into the marine end of the hobby I had been married for many years. Finding Nemo was no longer a box office hit but had been released on DVD I believe. My wife’s in home daycare was in it’s 17th year and our youngest son wasn’t even 9 months old. The idea to begin mentoring youth came to me completely by accident. I began to notice that many of the older children that attended the daycare would make it a point to find an excuse to have a look into the new marine tank. With each new addition of coral, fish or invert would come a new set of questions. I enjoyed answering them and I still do today. I began to take note mentally of the few kids that asked the most questions and showed the most interest. I would then schedule delivery of livestock so that it would arrive on a day one or two of the kids would be in my wife’s care. I’d do this to teach proper acclimation methods of new tank residents. I would involve them in maintenance tasks such as water changes, testing, and would even supervise the older kids while they scraped coralline from the glass with old credit cards. I was teaching them important lessons in husbandry and other skills without them realizing they were being taught. It was fun for them and sparked the passion in their hearts. The two in particular. They are old enough now that a sitter is no longer needed but they still come around. They are brothers and their parents won’t allow them to have a tank. But they are pretty much alright with that for now because they have my tanks. I’ve begun teaching them propagation methods this summer and the older of the two has stated that he’s already requested a 300 gallon reef ready as a high school graduation present.

There are so many ways to become a mentor to youth and guarantee the continuation of the hobby. Not only that it will continue but will do so in the right way that is fair and just to the inhabitants of the aquarium. I wouldn’t just approach a child on the street and say “Hey, you wanna learn to be a reefer?”.  Strange looks would be the least of what you’d most likely receive.

These are just a few ways that come to mind. I’m sure the possibilities are endless. I envy those that own or work in a fish store. What better a place to pass the knowledge and flame along. If I walked in their shoes, I would allow the kids that really wanted to learn to do minor duties, under supervision of course or even just loiter and ask questions as long as the desire was genuine and they were not disruptive to business.

I still do all that I am able to pass along the knowledge I’ve gained to up and coming enthusiasts. Seeing the spark glow in the eyes of the little reefers is all the reward I need.